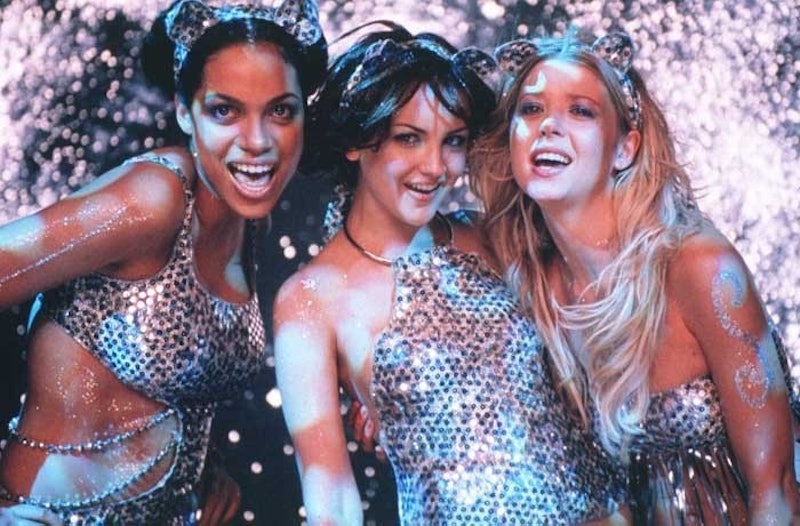 As you get older one thing becomes abundantly clear: your tastes can surprise you. If you'd told me back in 2001 that Josie And The Pussycats would become a movie that I would grow up to passionately defend against (frankly ignorant) people and force boyfriends to watch against their will, I would have called you a crazy fool. But the truth is that I genuinely love this film. Not in an ironic way or in a "It's so bad it's funny" manner, but in a shockingly sincere "...has this actually become one of my favorite movies of all time?" kind of way. Josie And The Pussycats is worth an immediate re-watch, because it remains one of the best early '00s movies ever made.

Josie And The Pussycats is pop genius, enticing viewers in with a friendly enough looking movie covered in enough pink, sparkle, and leopard print as to appeal to those of us who just desperately search for something light and fluffy to watch on a depressing Monday night. Except it goes way beyond those impressions to deliver a smart parody of subliminal marketing, pop cultural consumerism, and the exploitation of celebrities as disposable commodities with enough self-awareness that it's surprising nobody breaks the fourth wall.

If you're still not quite convinced, then let me guide you though the top 13 reasons why you should re-watch Josie And The Pussycats immediately:

1. It Celebrates The Power Of Female Friendships

At it's foundations, Josie And The Pussycats is all about how hanging out with your best friends, loving them unconditionally and having non-stop fun with them is one of the most important things in the world. And that's a message that I think we can all support.

2. It Shows A Postive Portrayal Of Female Musicians

Though there's obviously movies like We Are The Best, The Runaways, Ladies And Gentlemen, The Fabulous Stains which have depicted the experiences of women in rock music, they're still pretty few and far between. Josie And The Pussycats remains a pop-bubble of inspiration for women who desperately aspire to start a band with their besties.

3. It Never Took Itself Too Seriously

For real, it's hilarious. There's so much tongue in this film's cheek that it's amazing we can even make out the dialogue.

4. It Made Some Pretty Bold Statements About Mass Consumerism

Let's not dance around this — Josie And The Pussycats was a pseudo-anarchist manifesto, packaged in pink, glitter wrapping, warning all of us about the dangers of being brainwashed by subliminal advertising into buying stuff that we don't actually want or need.

5. And Had A Lot To Say About The Ways In Which Pop Culture Is Used To Sell Products

It takes a lot of guts to be a big part of pop culture whilst also criticising it from the inside.

6. And Had Insane Levels Of Product Placement To Prove It

This film is layers upon layers of satirical parody against films and TV shows which shamelessly used their content to advertise products to their audience. There is so much branding in this film that some scenes are left looking like a Jeremy Scott couture collection (and suffice to say, it's actually pretty spectacular).

7. It Had An Amazing Pop Punk Soundtrack

So insanely catchy. I had this album on cassette tape (remember those, guys?) that a boy I liked at the time had made for me, and it was the perfect, positive album to play before leaving the house in the morning. The woman providing lead vocals for all the songs? That would be Kay Hanley from Letters To Cleo (a.k.a. The prom band from 10 Things I Hate About You).

The ultimate parody of '00s boy bands played perfectly by Seth Green, Breckin Meyer, and Donald Faison. Their big hit, "Back Door Lover," is an embarrassingly obvious ode to a sex act that their young female fanbase really shouldn't be too privy too, capturing the essence of many boy bands who hinged love songs on less than graceful euphemisms.

9. It Starred A Young Gabirel Mann (a.k.a Nolan Ross From Revenge)

Please continue to humour me when I prattle on about how Nolan Ross should have had his own TV show.

10. It Featured The Power Acting Team Of Parker Posey And Alan Cummings

Fans of The Good Wife will remember these two working together as snappy exes, able to shut the other down with the most sniping of comebacks or the most knowing of eyebrow raises. In Josie And The Pussycats, their own-screen chemistry is just as evident, playing the film's OTT villains.

I'm talking leopard print, feathers, cat ears (of course), and glitter on everything. 2001. What a time to be alive.

Details have recently been released for Riverdale, the CW's live action TV show of the Archie comics series (of which Josie And The Pussycats were featured characters), and it sounds wonderfully, weirdly dark and just as subversive as this movie's take on the universe. So, before you crack open the comics, it could be worth returning to Josie And The Pussycats in order to remind yourself of just what could be in store for you when the series starts in October.

I only have four final words to leave you with before I drop the mic on this one and that's Du Jour means family. If you aren't immediately laughing at the thought of that line, then you definitely need to re-watch this film asap. Peace out, Pussycats.