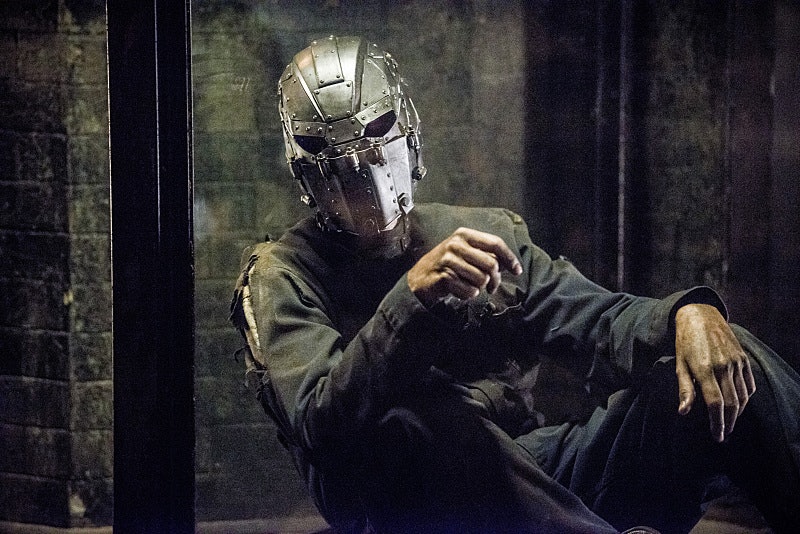 Tuesday's season finale is going to be an emotional one for The Flash, as it's set in the immediate aftermath of the death of Henry Allen. Barry has some mourning to do and one of his fathers to avenge, so I imagine most of the episode will be dedicated to that. But I don't believe that The Flash will sign off for the summer before pulling back the curtain on one big reveal. I'm confident that the identity of the masked prisoner in one of Zoom's cells will get out this Tuesday. And though "the real Jay Garrick" has been a popular guess, there's also a good chance The Flash could bring back a different face — one with a lot less baggage. The man in the iron mask could be Eddie Thawne, or at least the Earth-2 doppelganger of the deceased cop.

One big piece of evidence in support of the Jay theory is the mask itself. Why is it so important that Zoom keeps his prisoner's face covered, unless his identity reveals something about Zoom's plan that he'd rather keep hidden? But the mask doesn't just obscure the person's appearance. It prevents that person from communicating verbally, hence the man tapping out "J-A-Y" for Barry in the neighboring cell. And story-wise, putting that prisoner in that contraption enabled The Flash showrunners to tease out the mystery throughout the season.

So the mask doesn't eliminate Eddie from the list of suspects. And there are stronger clues elsewhere. It was a parade of doppels in the two episodes where Barry visited the alternate universe ("Welcome To Earth-2" and "Escape From Earth-2"): evil Cisco and Caitlin lookalikes, Joe as a nightclub crooner, and Iris, married to and very in love with her Barry Allen. But Barry didn't meet Earth-2's Eddie Thawne in that episode. He was mysteriously absent from the proceedings. Perhaps he was indisposed in Zoom's lair.

If Eddie is the mystery man, that's an exciting opening for a lot of storytelling. For starters, it gets actor Rick Cosnett back on the show, potentially in a big way. And this Eddie Thawne might have abilities beyond the Earth-1 cop's bravery and selflessness. (Never forget how he sacrificed himself to wipe out Eobard's existence and saved both Earths in the process.) If Zoom is keeping him locked up, then I guarantee that Earth-2's Eddie is a Metahuman and one who would be a wrench in Zoom's plans.

However, Anti-Zoom doesn't necessarily mean "good guy." Immediately after the Season 1 finale, Andrew Steinbeiser of ComicBook.com presented a character theory based in part on the ring Eddie wore around his neck in that episode. The talisman reminded Steinbeiser of Malcolm Thawne in the comics, Barry Allen's secret twin (just go with it) and a baddie who goes by the name Cobalt Blue. A concept: Zoom's defeat sets Earth-2's Eddie free and he becomes the big bad for Season 3. That's all dependent on the impending doom scenario Cisco vibed for both Earths last week, of course.

Whether or not this theory comes true, the identity of the man in the iron mask will definitely surprise a lot of fans. Zoom actor Teddy Sears told TV Line that he "didn't have a clue" who that character was until it was revealed to him. And since Jay is the most obvious guess, this statement could count him out. Then in a season finale preview interview, showrunner Andrew Kreisberg told The Hollywood Reporter, "The answer is going to blow your mind."

My mind is prepared to be blown, Flash. The identity of the man In the iron mask better live up to the hype.