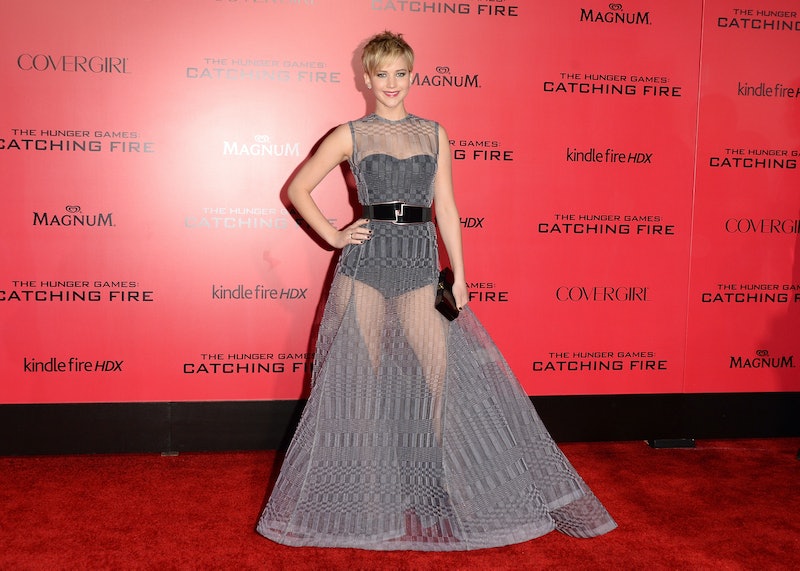 Jennifer Lawrence in Dior dresses is beginning to be a bit like a high-fashion version of Taylor Swift and high-waisted shorts. Sure, it works well enough... but, switching things up wouldn't hurt, right? Luckily, for Lawrence's newest campaign with Dior (her third), a strapless gown was nowhere to be seen. Instead, the campaign showcases Lawrence in an androgynous suit accessorized with minimal makeup, with an emphasis on the star's pixie-cut hairstyle.

Since Lawrence's long-time deal with the fashion house has reportedly been extended another three years, it's refreshing to see an ad campaign that is at the opposite end of the Dior spectrum for the actress. From her "poofy" Golden Globes gown to the infamous dress that caused her to trip at last year's Academy Awards, the reviews of Lawrence in Dior have been mixed, if not generally neutral.

We can be sure to expect our favorite goofy actress in a Dior gown at the upcoming 2014 Oscars, but in the meantime it's great to see Lawrence in such a different, simple ad campaign that truly, and differently, emphasizes the award-winning actress' beauty.

While Lawrence's past Dior campaigns, like Miss Dior in 2013, consistently emphasized her natural beauty, the new campaign manages to do so in a bolder way, while still maintaining the same softness and femininity. Photographed by Patrick Demarchelier, the print campaign will make its first appearance in the U.S. in the April Issue of Vanity Fair, according to WWD.

More like this
Dua Lipa On YSL Beauty, Plus Her Fearless Approach To Hair & Makeup
By Erin Stovall
Jennifer Lopez's Holiday Pedicure Has The Most Glam Snowflake Design
By Olivia Rose Ferreiro
8 Gorgeous Hair & Makeup Moments From The 2022 American Music Awards
By Audrey Noble
The Best Looks From Miami Art Basel 2022
By Dominique Norman
Get Even More From Bustle — Sign Up For The Newsletter