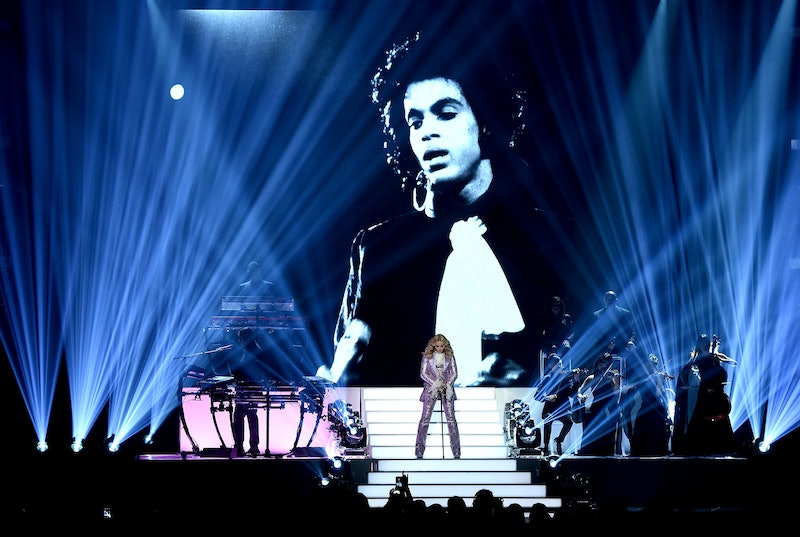 At this point, I've gotten use to seeing celebrities be shady toward each other, but I've maybe never seen one awards show give another one side eye. At least until I heard about the BET Awards' Prince tribute. At face value, that simple statement might not sound like it has anything to do with anyone else, let alone another award show, but the way it was announced will prove otherwise. Let me start from the beginning. On May 23, at the Billboard Music Awards, Madonna paid tribute to Prince with a performance of "Purple Rain" alongside Stevie Wonder, spangled lavender suit and all. (Because if you aren't going to take the opportunity of a Prince tribute to wear head-to-toe purple sequins, what are you even doing?)

I was initially excited to hear that Madonna had been chosen to honor Prince, but her performance didn't ultimately blow that many people away. It was lackluster enough that Questlove felt the need to defend it, pointing out in a series of tweets that "every Prince rendition will not be a life changing orgasmic xperience [sic]", and that "just to SING his work is brave enough", before reminding us that feelings are on high right now as we all reel with the loss of the great artist. Then there was BET Awards, who posted a promo for their upcoming awards on Jun. 26, promising... ahem... a more satisfying tribute than the one provided by the BBMAs.

The above video was posted shortly after Madonna completed her performance, so it's hard to see it as anything other than a direct response to what many felt was a disappointing showing. And, honestly, I think award shows attempting to out-do each other in terms of honoring such an influential artist can only benefit us as an audience. I mean, a competition as to who can honor Prince better? Honestly, where do I sign?