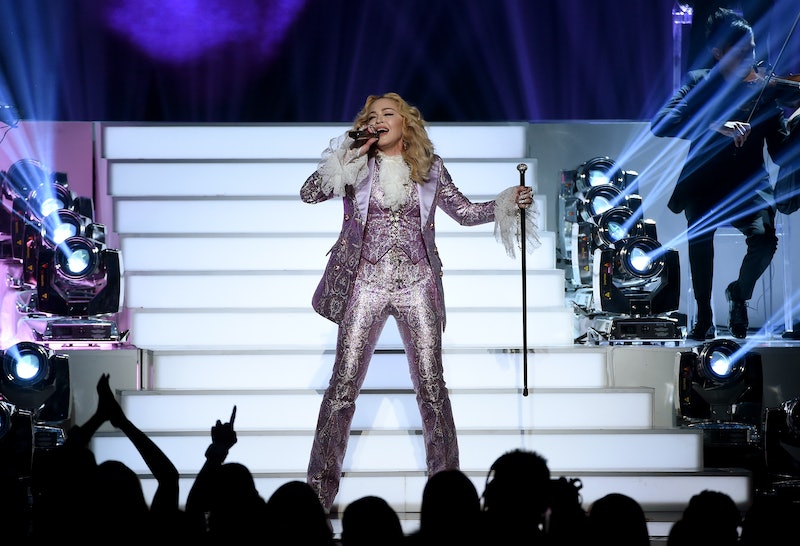 On Sunday night, the music industry celebrated a legend when Madonna honored Prince at the Billboard Music Awards. The timing marks just over a month since the 57-year-old died. What better way to honor his life than a heartfelt performance, especially from someone who knew him so well? (FYI: the "Vogue" singer and Prince were closer than you may have thought.) During the show, the Madonna brought out another of Prince's close friends, Stevie Wonder, as a special guest and the pair sang "Purple Rain." It made the moment all the more beautiful, as the audience waved around purple glowing wristbands. They even got the crowd to sing along to the chorus.

Not only is "Purple Rain" one of Prince's most memorable songs, but it's the name of his 1984 movie and its accompanying soundtrack. After thanking Wonder for joining her on-stage, Madonna said, "Most importantly, thank you Prince Rogers Nelson for all you have given us." In just a few words, she really said it all.

Leading up to the show, there was much talk about Madonna's upcoming tribute to the late music icon. However, the show's producer Mark Bracco issued a statement to the Associated Press and said,

Listen, I think everybody is entitled to their opinion and everyone can have their own opinion, but I will say that we are honored and could not be more excited for Madonna to be on the show and to pay tribute to someone that was her friend and her peer and her colleague. I think it's going to be fantastic.

Bracco also added, "It’s going to be very, very intimate and very respectful, and I think it’s something that is really going to pay tribute to Prince as the incredible, groundbreaking artist that he was and the influence that he had on music."

Here are a few videos from the "Purple Rain" performance:

Even Rihanna got really into it.

Overall, it looks out that Bracco was right; although there's no denying the legendary loss of Prince, Madonna's tribute really did celebrate his best work in the best possible way.