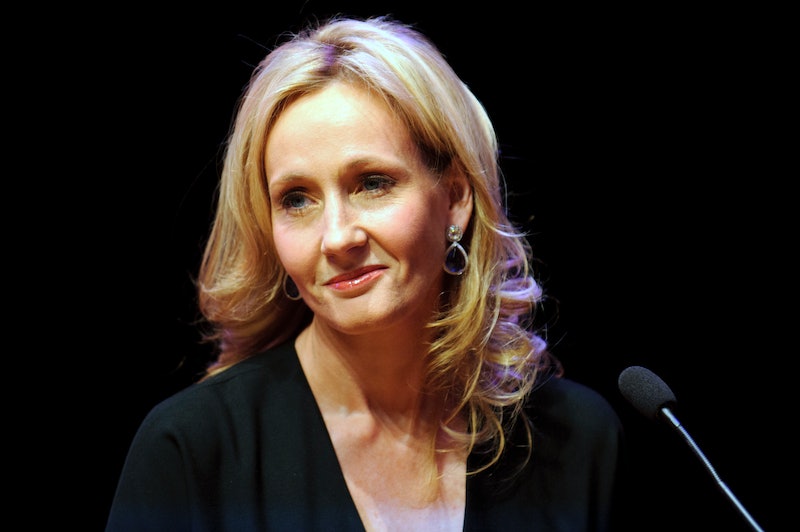 J.K. Rowling graced us with the world of Harry Potter when we were but small children, a fascinating world to be explored and adored, and oftentimes feared. It's such an expansive world, and we're still finding out more about it. Remember that sad day when you'd finished Harry Potter and the Deathly Hollows and truly believed it was all over? Or when you watched the ending credits of the final movie and wondered what to do with your life? Thankfully those moments didn't last long, because Rowling has continued to reveal more and more about the world.

Every year Rowling tells us more about characters through Pottermore or even her Twitter account. Sometimes she admits who her favorite characters are, and other times reveals that she had no choice but to kill off a certain one. The more we learn about Harry Potter and the world of wizards and witches, the more confident I become in knowing that Harry Potter will always be a part of human history.

Whether you're an HP champ and know every single detail Rowling has told us regarding Harry, Ron, and Hermione, or know the weird details of Harry and Voldemort's distant relation to one another, here are the 14 most fascinating discoveries made about the world of Harry Potter since the books ended:

1. The Deaths That Almost Happened (Or Didn't Happen)

During the extras of the Harry Potter and the Deathly Hallows: Part 2 DVD, J.K. Rowling does an interview with Daniel Radcliffe, and they discuss why neither Ron, Hermione, or Harry actually died — but Rowling does reveal that at one point, she'd seriously considered killing off Ron. On top of that, she'd also almost killed Arthur Weasley, but in the end, Fred was the Weasley who met the ultimate demise. Rowling also explained that she hadn't planned for Tonks and Lupin to die, but in order for the orphan story to come full circle, it had to happen.

2. Harry And Voldemort Are Distantly Related

In 2007 in a web chat J.K. Rowling confirmed that the two are "distantly related" through the Peverells. She said, "Nearly all wizarding families are related if you trace them back through the centuries." Yikes.

On Pottermore, Rowling graced us with The Potter Family, which took an in-depth look at Harry's ancestry. While we know the fate of James and Lily all too well, we weren't as familiar with his grandparents, Fleamont and Euphemia Potter. We learned that the two struggled to have a child, but were surprised and thrilled when James came along. Unfortunately, Fleamont and Euphemia both died due to Dragon pox and never got to meet their grandson.

4. Where Harry Got All His Money From

Speaking of Harry's grandparents, Rowling revealed that Fleamont invented none other than Sleekeazy’s Hair Potion, and after Fleamont sold the company, he quadrupled his fortune. That money was then left to James and then to Harry. While James and Lily were incredibly talented with magic, they didn't have careers which would've provided such a wealthy sum for Harry, so it was good to finally find out where it all came from.

It's free?! I wonder if it's true for the American Hogwarts, too.

6. How To Correctly Pronounce Voldemort's Name

7. The Fate Of The Longbottoms

Rowling also revealed that Frank and Alice Longbottom will never truly recover. They were placed in the "incurable" wing of their hospital, St. Mungo’s Hospital for Magical Maladies and Injuries, and they will go on never knowing about their son's heroic moments. It's OK, I'm not crying, I've just got a branch the size of a wand stuck in my eye.

In 2007, Rowling revealed that Dumbledore is gay and was in love with the wizard Grindelwald. She continues to shut down homophobia on social media to this day.

9. Harry Made Sure Snape Was Remembered As A Headmaster

During another web chat, Rowling said she believed that Harry would ensure Snape's portrait remained in the Headmaster office.

10. Dolores Umbridge Was Based On A Real Person

In an essay Rowling wrote, she revealed that Umbridge was indeed (and unfortunately) based on a real person. While she didn't reveal the name of the woman, but she did mention that "the woman in question returned my antipathy with interest. Why we took against each other so instantly, heartily and (on my side, at least) irrationally, I honestly cannot say."

Rowling explained that the trio went on to tackle careers in the government. While Ginny went off to become a professional Quidditch player for a few years, "Harry and Ron utterly revolutionized the Auror Department at the Ministry of Magic… Hermione began her post-Hogwarts career at the Department for the Regulation and Control of Magical Creatures where she was instrumental in greatly improving life for house-elves and their ilk. She then moved (despite her jibe to Scrimgeour) to the Department of Magical Law Enforcement where she was a progressive voice who ensured the eradication of oppressive, pro-pureblood laws."

I'm sure you can recall exactly where you were when Rowling released the news that Hermione and Ron's relationship was written out of "wish fulfillment" and that they probably weren't actually meant for each other. In the end, though, Rowling did say: "Maybe she and Ron will be alright with a bit of counseling, you know. I wonder what happens at wizard marriage counseling? They’ll probably be fine. He needs to work on his self-esteem issues and she needs to work on being a little less critical."

Every great marriage has rough patches though, right?

Rowling revealed the future of Draco Malfoy on Pottermore. His wife, Astoria Greengrass, is not being among one of the "sacred 28" families the Malfoy's approved of, so that made family meetings a little tense.

14. The Trio Were Immortalized On Chocolate Frog Cards

During Rowling's 2007 American book tour, Rowling revealed to fans that the trio each has a collectable chocolate frog card. Harry is described as "the first and only known wizard to survive the Killing Curse, most famous for the defeat of the most dangerous dark wizard of all time, Lord Voldemort." Ron is described as "destroying the Horcruxes and subsequent defeat of Voldemort and revolutionizing the Ministry of Magic." And Hermione is obviously the "brightest witch of her age who eradicated pro-pureblood laws and campaigned for the rights of non-human beings such as house-elves."