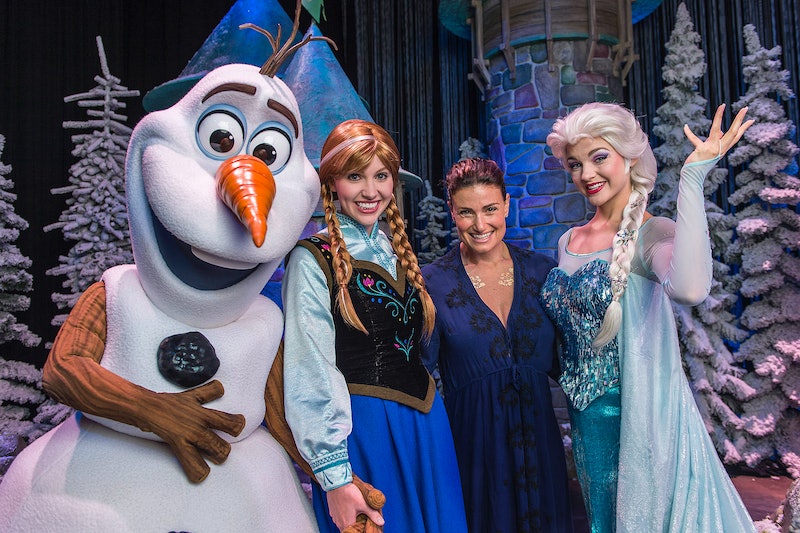 There's no denying that Idina Menzel has a powerful voice. And no, I don't just mean because she belts out "Let It Go" in Disney's mega-hit Frozen. (But that's totally true too.) Instead, I'm referring to the influence she has as a Hollywood star. When a petition began circulating to get Frozen 's Elsa a girlfriend in the upcoming sequel, it went viral. On the red carpet at the Billboard Music Awards, Menzel responded to the #GiveElsaAGirlfriend petition and her comments are rather awesome. She told Entertainment Tonight, "I think it's great. Disney's just gotta contend with that. I'll let them figure that out. No matter what, [Elsa] changed my life." Tying into Menzel's point, I believe Elsa's role would be all the more life-changing if Disney made her an LGBT character.

Seeing a same-sex couple portrayed in a major children's movie would not only be groundbreaking, but incredibly influential. It'd essentially give kids who identify as gay the chance to see themselves reflected on the big-screen, while also letting them know it's more than OK to be themselves. What better message to spread to a young, impressionable audience? The fact that one of the movie's biggest stars backs the petition says a lot. Of course, it makes sense that she points out that the ball is in Disney's court. But I'd have to imagine that having Menzel say it's "great" can give them a push if they're on the fence. Or at least it shows she's not shying away from the issue.

And it's not only gay individuals who would benefit from this kind of mainstream focus; I would imagine it'd help the younger generation be even more open-minded by normalizing same-sex relationships. There's no need for the subject to be taboo or hidden away any more than it already has been. Plus, the trope of a female character in distress being rescued by a prince is so over-done. Why not portray a strong young woman, who doesn't need to be rescued by anybody? Shouldn't she fall in love with someone for who they are, not the fact that they saved her? Because Elsa is already a powerful princess, having her fall in love with whoever she wants would just be an added bonus — and make her all the more empowered.

Sure, the #GiveElsaAGirlfriend movement has already spurred backlash, but as usual, the love outweighs the hate. Just look at these tweets of support:

If you check out the #GiveElsaAGirlfriend hashtag, you'll see plenty more messages of hope. As for why this matters so much, no one should underestimate the power of Disney. In 2015, Forbes reported Disney is worth nearly $180 billion and it ranked #8 on their list of the World's Most Valuable Brands. Even if you're not a Mickey Mouse fanatic, there's no denying the franchise's influence in pop culture — from theme parks to movies to Halloween costumes. As for this particular movie, Frozen broke tons of records ever since it premiered in 2013. It certainly became a phenomenon, even breaking the Guinness World Record for highest-grossing animated film.

With so many eyes on the movie's impending sequel, what better opportunity to portray Disney's first openly gay princess? By being "the first" in this category — just as Tiana became the first African-American princess in 2009 — Elsa can help open the door for other movies to follow suit. Hopefully in the future, it won't be as surprising for such diversity to hit the mainstream media. But in the meantime, any change is good change.

Like Menzel pointed out, it's up to Disney now. But I'm totally rooting for them to go for it — and no, I won't just "Let It Go."