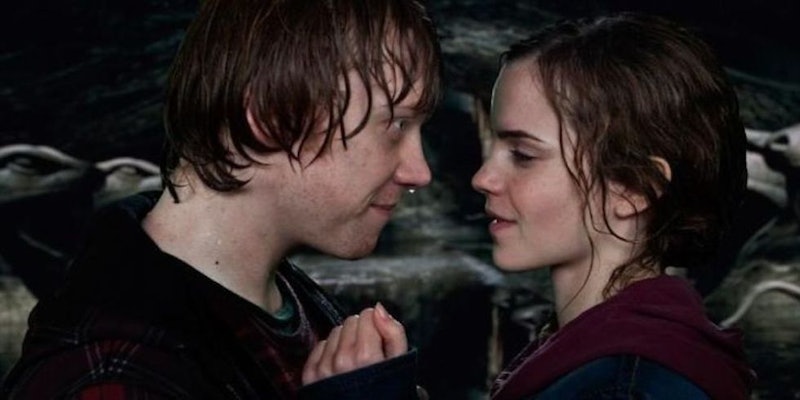 By this point, Harry Potter fans have exhausted themselves arguing whether or not the movies do the books justice. Even I, a vocal supporter of nearly all books over their movie adaption, am tired of the debate. There are aspects of the movies that I find frustrating (why couldn't they just make Felix Felices gold?!), and there are many parts of them that I think were handled very well. What's the point of continuing to talk about their differences?

Because I'm a Harry Potter nerd, that's why. And because there are some changes that the movies make that legitimately lessen the impact of the original scenes in the book. Sometimes these changes are made for budget reasons, or to reflect the fact that some subplots from the novels didn't make it to the big screen. It's understandable, but it still affects the way some important moments are played out.

One such important moment is the much anticipated and swoon-inducing first kiss between Ron Weasley and Hermione Granger. While fans will continue to argue whether Hermione should have ended up with Ron or Harry, the kiss between the two was an undeniably sweet moment in a pretty dark novel. When I saw the final installment of the film series, however, I was disappointed in what they did with the original material.

To give you a quick recap of how the scene goes down, let's turn first to the book. Harry, Ron, and Hermione have returned to Hogwarts and are in the middle of the final battle. All hell is breaking loose around them, and Ron suggests that they go down to the kitchen to allow Hogwarts's house elves to escape. This promptly follows:

There was a clatter as the basilisk fangs cascaded out of Hermione's arms. Running at Ron, she flung them around his neck and kissed him full on the mouth. Ron threw away the fangs and broomstick he was holding and responded with such enthusiasm that he lifted Hermione off her feet.

The movie plays out a little differently. Hermione and Ron enter the Chamber of Secrets to destroy a Horcrux, aided by a basilisk fang. Upon striking the cup, a giant water monster emerges from the chamber, chasing the two until it finally breaks over them, leaving them unharmed. Looking shocked, the two turn to each other and kiss.

It makes sense why they would choose to portray this scene differently in the movie. Hermione's love of house elves is significantly downplayed in the film versions, which would make the line seem pretty random and not quite as kiss-inducing. Instead, they replaced it with a dramatic scene that has the two facing down some sort of water-Voldemort and destroying a part of his soul.

I get it, but it still seems off to me. Not only is the kiss scene in the book so much more powerful (I'll get to that in a minute), but the film kiss seems less of a declaration of love that's been a longtime coming, and more of a reaction to a terrifying situation. Ron and Hermione aren't expressing feelings for each other, they're running on adrenaline from destroying a Horcrux and being attacked. That kiss comes from a place of stress and fear, not one of love. Obviously by this point in the series no one doubts that the two are going to get together, but the circumstances of their first kiss are less than ideal.

What's so important about the scene in the book is that it recognizes that there has been one major issue standing in the way of the two's happiness for a long time: Ron's immaturity. In the second half of the series, it was pretty obvious that Ron and Hermione were going to end up together. What was less obvious was whether or not Ron deserved Hermione. He was generally immature, was often quick to lash at at her, and rubbed his relationship with Lavender in her face while simultaneously punishing her for her past relationship with Victor Krum. Not exactly great boyfriend material.

With this scene, however, we finally see Ron begin to grow up. His concern for the house elves, a group he previously mocked Hermione for being so invested in, shows that he has matured to a point where not only is he supporting Hermione's passions, but he's making them a priority. Though he seemed apathetic to their plight for years, he's apparently been internalizing Hermione's discourse on house elf rights. This is unlikely due to any great love for house elf liberation, and more to due to his love for her. Her passion for S.P.E.W. is a long-running point of contention between them, so for Ron to finally, in the midst of chaos, show an unsolicited interest in the plight of Hogwarts's house elves is a huge milestone for their relationship. Finally, Ron seems to be mature enough for Hermione.

I don't hate the kiss scene in the movie, but I don't think it holds the promise of a strong, healthy relationship in the same way that the scene in the book does (maybe that's why actor Rupert Grint doesn't have much hope for them). And that's a shame for fans who waited for so long to see the two finally get together.

More like this
16 Novels That Paint A Realistic Portrait Of Abortion
By K.W. Colyard
At 14, Jenny Han Wrote Rom-Coms About Her Friends & Fan Mail To Leo DiCaprio
By Alyssa Lapid
10 Must-Read New Books Out This Week
By K.W. Colyard
Sparks Fly Fast & Furious In 'Honey & Spice'
By Bolu Babalola
Get Even More From Bustle — Sign Up For The Newsletter