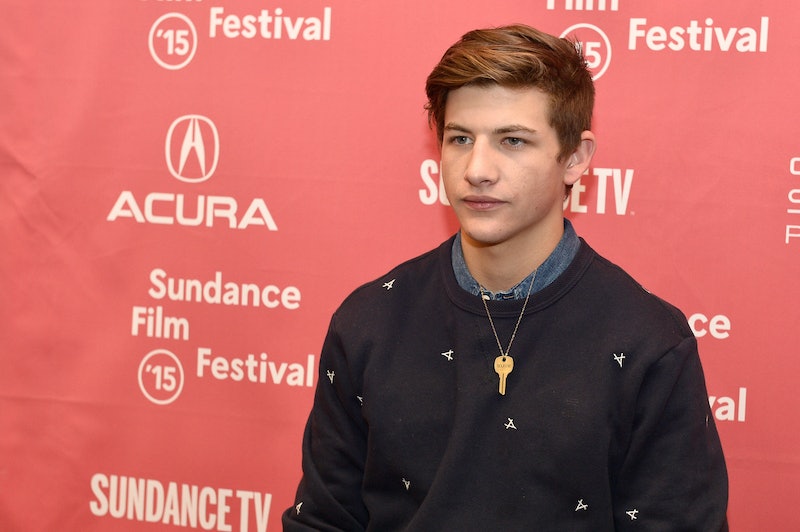 Back in my day, kids, James Marsden played Cyclops on screen. But in X-Men: Apocalypse, the actor who plays Cyclops is a brand-new star, just one of many mutant roles recast for the purposes of the film's earlier spot on the timeline. Game Of Thrones star Sophie Turner plays a young Jean Grey (that was Famke Janssen in the previous trilogy); Kodi Smit-McPhee is Nightcrawler (formerly played by Alan Cumming); and the role of Scott Summers a.k.a. Cyclops is handed off to up-and-comer Tye Sheridan. The 19-year-old actor told Collider that being cast as the laser-eyed hero was "incredible" and "an honor," and it's easy to see why. A franchise like X-Men can break a big Hollywood career. Look at Hugh Jackman, whose starpower increased dramatically after he donned Wolverine's claws in X-Men in 2000.

You may not be familiar with Sheridan's name just yet, but the young actor is far from inexperienced. Besides his earlier credits, Sheridan also brings the approval of his predecessor to the role. "I think he's a perfect fit, and I congratulate him," Marsden told HitFlix on the red carpet of his recent opening The D-Train. Sheridan responded to that praise with some classy, old-fashioned gratitude. "I wrote him a handwritten letter just telling him how big of a fan I was of his work and how much I loved him in X-Men and how honored I feel that I get to play him," the Apocalypse actor told Collider.

So the older Cyclops gives two enthusiastic thumbs up to the new one. What else do you need to know about Sheridan? These are a few of the impressive gigs he's had to date.

The Huffington Post reported that that over 10,000 children were considered for a handful of roles in Terrence Malick's dreamy, non-linear family drama Tree Of Life. Tye Sheridan was one of the casting team's finds. He made his feature debut with pros like Brad Pitt, Sean Penn, and Jessica Chastain, as Steve, one of the O'Briens' three sons.

From part of an ensemble to an unqualified lead, Sheridan starred with Matthew McConaughey and Reese Witherspoon in the 2012 drama Mud thanks to some sterling recommendations from the Tree Of Life set. Mud director Jeff Nichols told Entertainment Weekly that his filmmaker colleagues referred to Sheridan as "Torpedo." "When things got a little flat or just needed to be mixed up," Nichols said, "they’d send Tye in and he’d just shake it up. No scripts. He just had this natural energy that people responded to.”

Scout's Guide To The Zombie Apocalypse

Concerned that all these serious movies might deprive Sheridan of the classic "boy watching girl walk towards him in slow motion" scene? Not a chance. In the horror comedy Scout's Guide To The Zombie Apocalypse, Sheridan gets to play around with the raunchy humor that is the regular territory of his age group, but with more of the undead.

Last Days In The Desert

And back to the prestige movies! Sheridan was part of the small cast supporting Ewan McGregor's turn as Jesus Christ (and his opposite) in the 2016 drama Last Days In The Desert. The young actor told Uproxx that he doesn't consider Last Days to be a religious film. "I think it’s all up to you to decide what the movie means to you," Sheridan said.

Next up after X-Men: Apocalypse, you can see Sheridan in the independent thriller Grass Stains, the Iraq war drama The Yellow Duck, and the film adaptation of the cult favorite sci-fi novel Ready Player One.