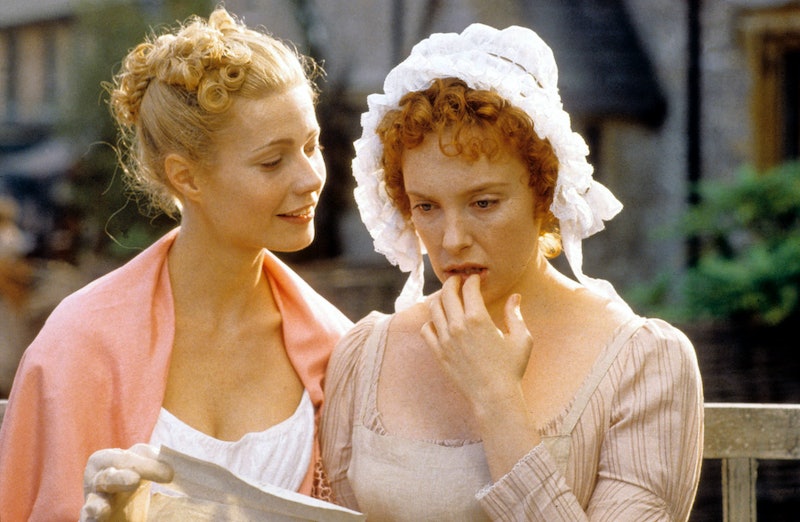 Jane Austen fans are pretty much infamous for being hardcore about their love of Jane Austen's novels. Any Jane Austen inspired work, whether it's a movie, book, or web series, is sure to face intense scrutiny from an army of Janeites. After all, those of us who love the work of Jane Austen are naturally very protective of the stories we hold dear. We love it so much that we want to make sure any adaptation does it justice — and, of course, we want to ensure that everyone else loves and appreciates her work as much as we do. After all, Jane Austen was the queen of sass.

For those of you who have read every Jane Austen novel and seen every Jane-inspired movie that exists (and, if Austenland were a real place, you'd be there before you could say "truth universally acknowledged"), you know what I'm talking about. You've gone on and on about how much you love the queen of the Regency era — but for every time you've talked about your adoration of Jane, you have also gotten into an Austen-related argument. Your poor nerves are frayed, but it can't be helped — Jane Austen is seriously loved, and must be seriously defended. Even if what you're defending is just one of your passionately held opinions, if you're a Janeite, you've probably argued about one... or two... or all... of the following things:

Most Janeites have an opinion about which actor portrays Mr. Darcy best... and if someone challenges that, we're ready to defend our selection. Maybe Colin Firth will always be your Darcy, or maybe you prefer Matthew Macfadyen. Maybe you thought Laurence Olivier did the role justice, or maybe you think there's truly no Darcy like the Darcy in the book. But no matter which actor is your favorite, you've probably defended his portrayal at some point or another.

2. Which Pride And Prejudice Film Is The Best One?

Speaking of Pride and Prejudice, most Jane Austen fans have gotten into at least one argument about the best film adaptation of Darcy and Lizzie's infamous love story. It's the most popular of Austen's books, and, naturally, it has been adapted the most times. But that doesn't mean we all agree about which film is the best representation of the book we hold so dear to our hearts. Many Janeites love the 1995 BBC production, whereas others love the 2005 version with Keira Knightley. There are tons of fans of unconventional adaptations like The Lizzie Bennet Diaries and Bride & Prejudice. However, we can all probably agree that the 1940 adaptation, though it starred very talented actors, strayed a little far from the actual plot... and evidently borrowed a few too many costumes from the production of Gone With the Wind. Not exactly Regency-appropriate.

3. Pride And Prejudice And Zombies: Yes Or No?

Is Pride And Prejudice And Zombies a travesty, or an awesome adventure story that Jane herself probably would have liked? Janeites have definitely argued about this one.

4. Which Jane Austen Book Is Best?

Though you can agree that all of Austen's books are awesome, you probably have a favorite. And you've definitely defended this favorite at some point or another. Because when your friend casually says that Persuasion is the most boring of Austen's novels, you are busy making three slideshow presentations about why she is so, SO wrong. (Two words: Captain Wentworth.)

5. Which Heroine Is Your Favorite?

Is Fanny really that bad? Are you more like Elinor or Marianne? And do you love Emma, or hate her? This argument is more lighthearted, because Austen's heroines are all so beloved — but you've definitely had some heated discussion in order to defend your favorite Austen woman.

6. Which Jane Austen Hero Would You Most Want To Know In Real Life?

Would you rather argue with Darcy, or receive a letter from Captain Wentworth? Is Tilney actually kind of a rake, and is Frank Churchill suave or completely disrespectful and awful? You've had an argument or two about this. You've also vehemently defended Mr. Darcy when your friends who don't like Jane Austen say that they don't understand why you're so obsessed with such a rude man. I was once told that I "wouldn't really like that in real life." Um, Elizabeth didn't like him at first either, but she CHANGED HER MIND. Just like Austen haters would if they read all of Austen's masterpieces.

7. Was Jane In Love With Tom Lefroy?

Sadly, there's so much we don't know about Jane Austen's life. Was she really in love with Tom Lefroy? How was Sanditon supposed to end? Would she have loved Clueless as much as we do? We can only wonder.

You've heard this one a lot: someone has asked if you understand that Jane Austen characters "aren't real." And maybe you've talked about them as if they were, and given advice based on Austen's books, and own a t-shirt or two that says "I <3 Mr. Darcy." But honestly, there's a reason these books seem so real, and why they've been so beloved for years. Austen's sharp wit, her social critique, and her ability to create realistic characters make her work withstand the test of time. And just because the characters don't "exist" in entirety within reality, doesn't mean we aren't all Elizabeth Bennet in our own way.