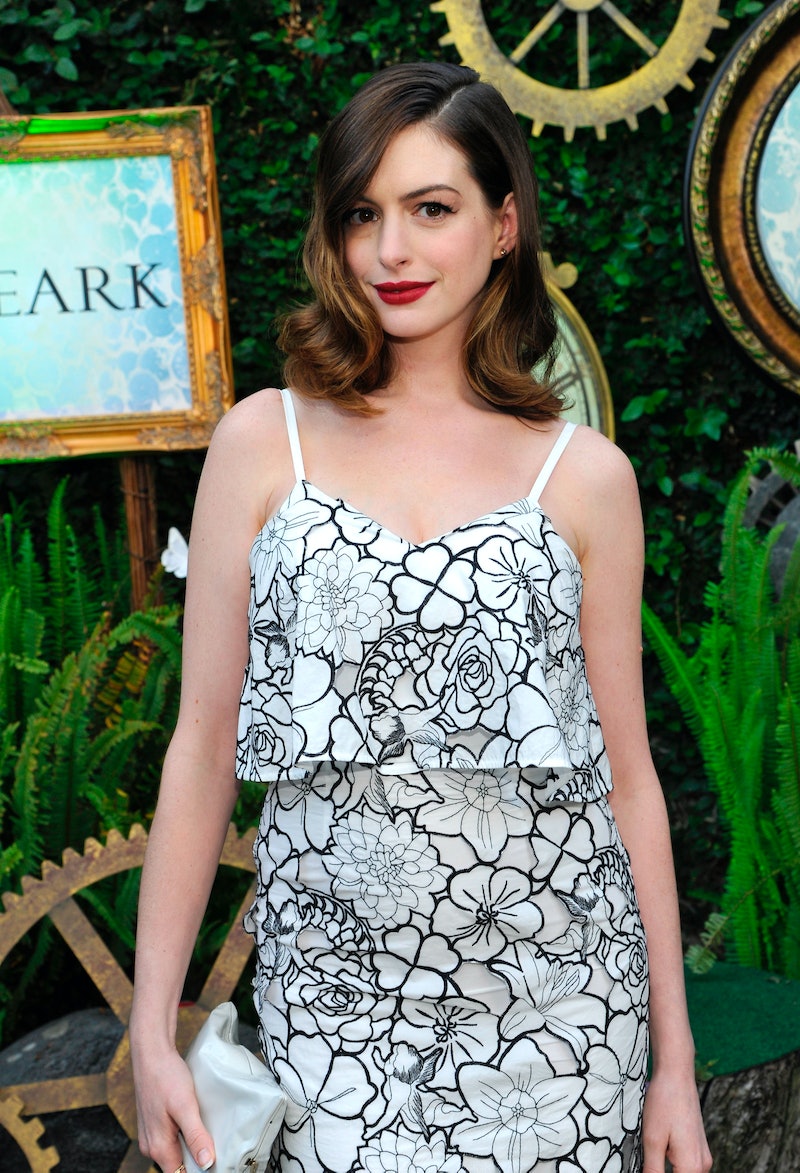 Anne Hathaway is fed up, and she has a reason to be. The actress returns to the big screen in Disney’s latest mystical venture, Alice Through the Looking Glass. Like the first film in 2010, it explores what happens when a strong-willed female refuses to be put in any box society has constructed for her. (Tea parties and time travel are much more appealing anyway.) The film also explores the idea of time, which Alice (Mia Wasikowska) first refers to as a “thief.” Unfortunately, the thought of time working against us is very real, and this actress has something to say about people putting down females — especially those in Hollywood’s spotlight — as they grow older.

Luckily, throughout the course of the film we learn that time isn’t a “thief,” but a precious gift. However, society hasn’t quite caught up with this notion, in my estimation. During the film’s press conference I asked Hathaway how these negative ideas of time hit close to home with her. And in that moment, she effortlessly commanded the attention of the entire room. “I invite all of us in this room, all of you with your incredible power as journalists, to stop the narrative of saying that women lose power as they get older,” she states, bringing on immediate applause from the audience.

“I’m becoming way more powerful as I get older. I’m tired of myself feeling the opposite. And I’m not gonna do it. I can’t do it alone,” she continues. “It’s gonna take everybody in here to stop using that language and take the narrative back the way Alice does.” What a boss. And what truth she spills here.

The 33-year-old went on to discuss a scene in the movie that made her cry when she first saw it a few weeks ago. Alice wakes up in a mental institution and was committed for being “excitable” and “full of fantasy,” referred to as “typical female hysteria.” When the male doctor tries to inject her with drugs to essentially sedate and control her, she injects him with it instead. “I was bursting with pride to be in a movie that’s taking the narrative back,” says Hathaway of the scene. “I’m really proud to work with a company like Disney, who’s really looking at the stories that it put out into the world and has the courage to revise them based on what we know and how we’ve evolved. That really moved me.”

Producer Suzanne Todd chimes in to explain how society’s current climate truly effected the film and its girl power message, which exudes throughout. When reflecting on how women experience feeling limited or set up for failure as Alice does, she says, “I think we all have that, I think if I ask every women in here, raise your hand if you were ever told it was going to be harder for you or you couldn’t do something because you were a woman. Right? Anybody else?”

“Unfortunately it’s common place in society, it’s part of what has been quite the narrative for so long. There are some positive things happening to change it,” the producer says. “But to be talking about it based on a movie and to be talking about female empowerment is fantastic.” The film’s star, Mia Wasikowska, joined to explain why she’s proud to be part of the movie’s female positivity: “Having a film, a summer blockbuster [with] a female lead; it’s strange that that’s unusual. Hopefully that will become more normal.”

Although the film’s creators used present-day inspiration to amp the girl power up a notch, the story’s foundation surprisingly goes way back. Director James Bobin explains how its feminist flare comes from the original author, Lewis Carroll and his muse, the real-life Alice Liddell. “He wrote this for her and about her,” says Bobin. “If you read the books, the characters [are] intelligent, bright, strong — Alice was a real girl.” He explains why he believes the classic story has “lasted so long,” because females can relate to women who go against society, “making choices as they want to.”

For Hathaway, Alice’s limitless wonderland was always her reality. She expresses her gratitude for her parents, who never raised her to feel constricted as a woman:

They never said: 'You can do anything because you’re a girl.' They just said: 'You can do anything.' They said the same thing to my brothers. I believed them because I love them. I’m really grateful they didn’t [say] that it was going to be harder, because when you say to someone it’s going to be harder because of x, y or z, you believe it. You already start off a little bit defeated. It’s helpful knowledge, but I’m not sure how helpful it is for kids to know that something is 'impossible.' As I’ve gotten older, I’ve learned what the challenges are, but I’m really happy my parents gave me that initial gust of wind to take off with.

Here she is, however many years later, an Academy-Award winning actress who’s crushing it in Hollywood because her parents’ advice was nothing but truth. And I have a feeling she won't allow age — or any societal construct thrust upon her — to ever get in her way.