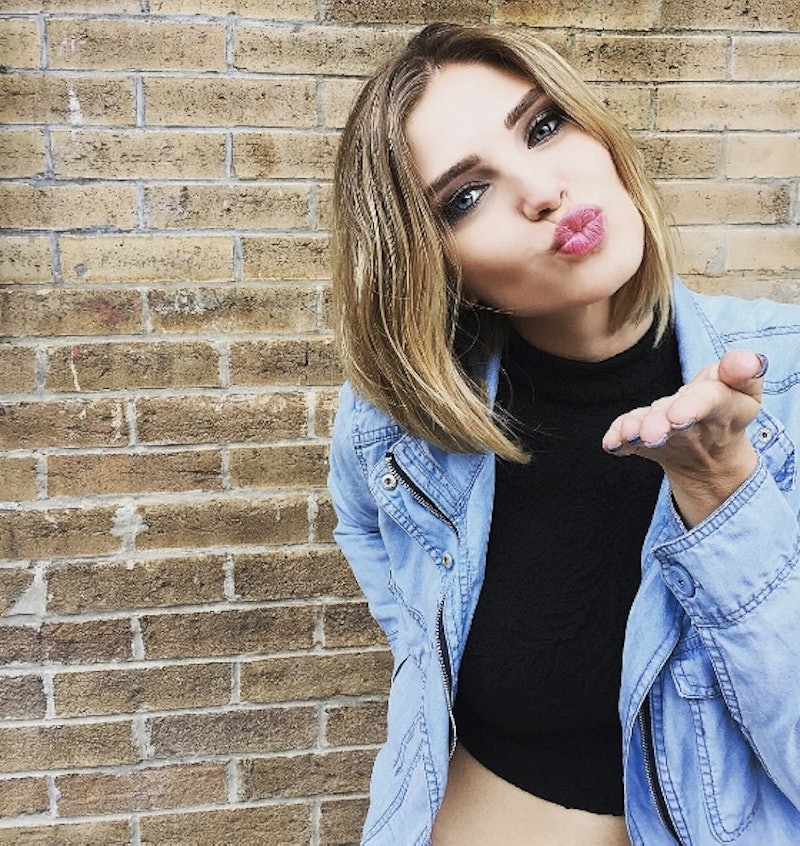 Break out the roses and red wine, Bachelor Nation, because the wait is over and it's time to watch JoJo Fletcher's Bachelorette journey! On Monday night, America met JoJo's 26 suitors, some majorly appealing, some creepy, and some downright drunk. We witnessed a painfully awkward "first kiss" with Will and a much more swoon-worthy kiss with the eventual first impression rose winner Jordan Rodgers. We saw the usual first night catastrophes — men taking off their clothes and jumping into the pool, embarrassing moments in general, awkward pick-up attempts out of the limo — you know the drill. But, after getting to know her so well on our season of The Bachelor, there is one reason why I know JoJo will find love on The Bachelorette.

After being brutally blindsided by Ben Higgins, JoJo (and her gorgeous hair) is back, and she's more radiant, confident, and eager than ever to find love. I'd say those are all important qualities when it comes to finding Mr. Right on reality television. But, there's one specific trait I've witnessed in JoJo that will guarantee her success this season: Her direct, practical, no-nonsense personality. I know — how ironic a quality on a show all about risking everything for romance. But JoJo isn't blinded by rose-colored glasses (apologies for the terrible pun), and that's going to help her until the end.

As someone who has been through the emotional rollercoaster that is The Bachelor, I know firsthand that it's easy to get caught up in all the glitz, glamour, and romance created by helicopter rides, candlelit dinners, and firework shows.. As a contestant, it's easy to say, "He just looked at me from across the room... He likes me!" As the Bachelorette, it's easy to get caught up in initial attraction and chemistry — which is something that former Bachelorette Ali Fetodowsky touched on during the quick Bachelorette BFF scene to open the first night. She advised JoJo to focus on love, not lust, and to make sure to get to know the guys before falling for first impressions.

I think the gist of the advice portion with the former Bachelorettes (as well as the random, nonsensical cameo from Jake Pavelka) is that JoJo should look past the surface to dig deep and be direct about finding love. And I know that she will. In fact, she has to. If any woman would go into her role as the Bachelorette with a no-nonsense, practical attitude, it's JoJo. After finding herself stuck in an awkward love triangle of "I love you's" on Ben's season, she gets this opportunity to show Bachelor fans who she really is and how she wants to handle her relationships. It's going to be so exciting to watch one of the most authentic women I've ever met be herself and find a great partner in life.

JoJo will ask the tough questions, and she'll answer tough questions as well. She will be bold, courageous, and fearless, and she won't be afraid to stand up to anyone. She will be practical, and she won't sugarcoat things. She won't get lost in the glitz and glam, and she'll be direct with people throughout the process. We see in the preview for the rest of the season that she will confront men who may be acting differently around her than they are in the house — like asking Chad, "Why does everyone hate you?"

If JoJo doesn't see a relationship going in the right direction with someone, she will let them go (and yes, it will hurt her feelings to do so). She won't tolerate any drunken messes or arrogant behavior and she won't say things that she doesn't mean — so don't anticipate her saying "I love you" to two of her men. Her guys will know where she stands, and she won't go through with something she's not totally confident in.

I'm thinking about a moment with JoJo where I really grew to love her personality. At one point during a "girl chat" with her during Ben's season, we were sitting outside and opening up about her feelings and she said, "I'm not going to say I love you to someone unless I really mean it ... I am taking this seriously and I won't make a choice if I'm not completely sure about it." She's on a very romantic show to find the man of her dreams, but she won't let its ritzy nature go to her head.

Think about the moment on The Bachelor when she told Ben she loved him and he said he loved her back. She didn't immediately jump into his arms and cry about the special moment, but rather, she looked at him quizzically and asked, "What? Are you allowed to say that?"

It's that kind of attitude that we got a glimpse of in the season premiere, too. At one point she voiced some fears, saying, "I'm not sure if I'm immediately connected to any of these guys, and that really scares me." Early in the show, when talking about how excited she is to be the Bachelorette, she also said, "I hope that I find somebody, but I’m scared I may not." Isn't it a little bit refreshing to hear that from a Bachelorette? She's here for real love, and she's not going to get caught up in the reality television experience.

We’ll have to wait and see whether she finds it, but based on the season promo, this may just be one of the most dramatic seasons of The Bachelorette EVER! There will be lots of man tears and lots of steamy makeout sessions, of course. And, from what I know of JoJo, and what America learned about her in Ben's season and on her season premiere of The Bachelorette, it should all add up to successful decision and hopefully a beautiful relationship by the end, because she isn't messing around.