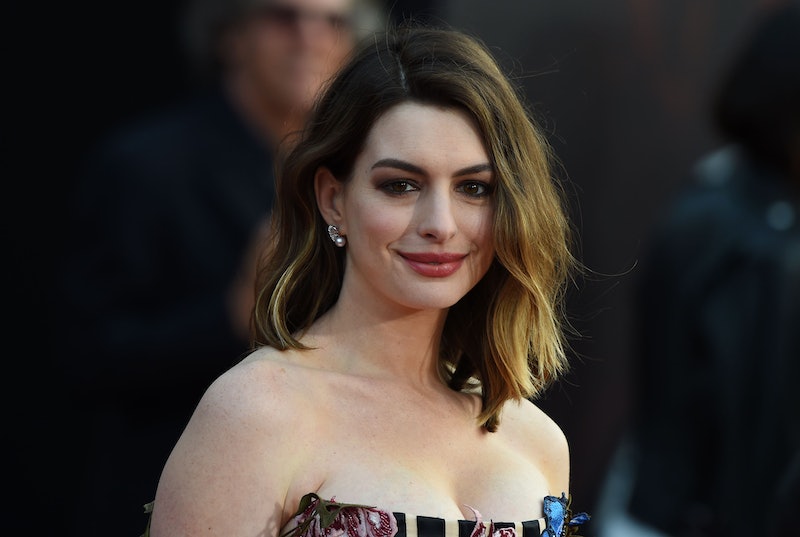 Every woman has a little bit of that awkward Mia Thermopolis-ness in them, I think. And if they don’t, they probably wish they did. My 10-year-old self thought The Princess Diaries ' leading lady was the coolest person on the planet because in all of her uncomfortable clumsiness, she embraced who she was and therefore was a total rockstar. However, the star of the beloved pop culture favorite, Anne Hathaway, never intended for young girls to worship her — at least off screen. During the Alice Through the Looking Glass press conference over the weekend, Hathaway offered some real talk about her intentions behind doing the 2001 hit, and why she’s (self-admittedly) getting a little too much credit for the role.

Yes, Mia Thermopolis was a renowned boss circa early '00s. Turns out though, Hathaway (who was 18 at the time), was as unwilling to be a role model in real life as her character was on screen. “I don’t think about that,” the 33-year-old admits. “When I did The Princess Diaries I got a lot of questions about being a role model and it never occurred to me that actors should be role models, for a multitude of reasons.”

I’m sort of obsessed with her honesty. “But also, that’s not what I’m interested in,” she continues. “And I don’t make films for that reason. If they happen to work out that way, I’m thrilled.” Being a new mom to one-and-a-half-month-old Jonathan doesn’t change that. “You’re giving me a lot of credit as a mom that when I was 17 years old, I thought, ‘My kids are going to watch this.’ I’m an exceptional mother,” she jokes. But really, she isn’t letting motherhood change how she views and approaches her craft, which is pretty badass.

Yes, she’s graced the big screen in family-friendly flicks including Rio (2011), Ella Enchanted (2004), Hoodwinked! (2004) and obviously the upcoming Alice sequel, but just because she now has a little one of her own, that doesn’t mean she’ll only seek out projects that are specifically geared towards the kiddies.

I’ve been in a lot of films actually that you can go to the movie theater and have date night with your family or even snug down on the couch everybody’s in sweatpants and you all make a human amoeba, just chill out together and feel warm and connected. I’m proud that my body of work has stories that allow families to experience them together. I can’t say I’m going to continue to make them because I have a child now. I will continue to hopefully make them because I respond to them and see challenges as an actress.

In fact, things are getting weird for her on the big screen, and not in a dorky Mia Thermopolis way. The actress gushes with enthusiasm talking about her upcoming project, a science fiction thriller called Colossal (also starring Dan Stevens and Jason Sudeikis). She ensures the audience the film was made on a super low budget and gets “really weird.” And she really couldn’t have looked more excited.

Weird is good in any way, shape, or form, and Mia would definitely be proud.