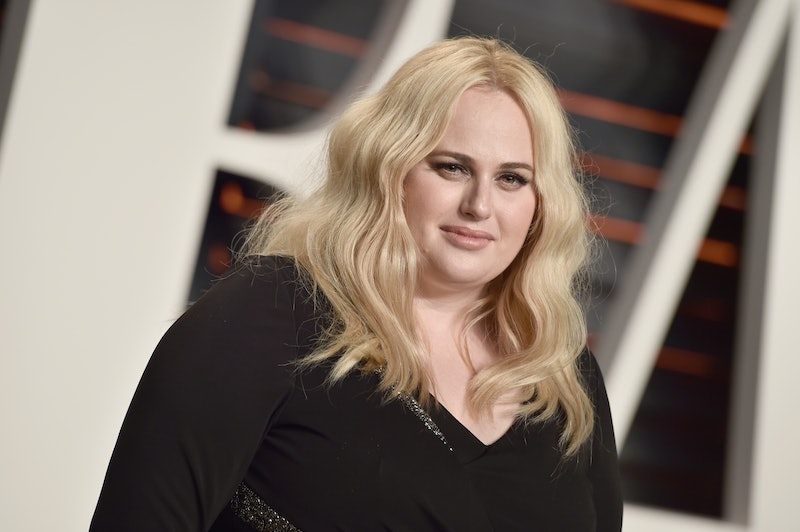 Nothing makes me happier than news that Rebel Wilson has a new movie coming out, and Wilson's latest film role sounds super fun. According to Variety, the currently untitled movie, will star Wilson as "a cynical young woman who doesn’t believe in love and then wakes up one day to discover that her life has become a romantic comedy." The premise sounds completely amazing, and the Pitch Perfect star is long overdue a leading role in a high profile rom-com. I couldn't be more excited for Wilson's new romantic comedy, especially as it's sure to break a lot of rules of the genre.

While the script is due to go through some rewrites, the premise is likely to remain the same, and it's a story that Wilson will most definitely do justice to. Often relegated to the role of the comedic sidekick, seeing Wilson as the romantic lead in a film will give her a chance to showcase her skills as a performer as well as a comic. The new movie is sure to break a lot of the rules of rom-coms, starting with the casting of Wilson, who is so often sidelined or underused onscreen. As the movie will probably pay homage to a lot of rom-coms, which romantic comedy tropes will feature in Wilson's new romantic comedy about living in a romantic comedy?

1. The Love Hate Dynamic Between The Leads

It doesn't happen in every romantic comedy, but there are plenty of movies in which the two leads start out hating each other, only to realize that their mutual hatred is actually love. Wilson has such great comic timing that the banter of a love hate relationship would work perfectly.

2. The Advice-Giving Best Friend Who's Hopeless In Love

Wilson would ordinarily play this part in any stereotypical romantic comedy, most recently being the fun single friend in How To Be Single. It'll be interesting to see how her new movie will utilize this trope. Perhaps by enlisted seasoned quirky BFFs like Judy Greer, Kathryn Hahn, or Melanie Lynskey?

Rom-coms are renowned for having ridiculous makeover montages in which already beautiful actresses are turned into goddesses by removing their glasses and washing their hair. As Wilson's character apparently wakes up to find that her life has turned into a romantic comedy, will her transformation be instant? Or will the movie balk this cliche and go in a new direction?

4. Someone Racing Somewhere To Declare Their Love

Whether it's running through an airport, or to the person's house to declare your love in the middle of the night, every rom-com has to feature an urgent dash to somewhere or someone.

5. A Series Of Obstacles Preventing Love From Blooming

From a simple miscommunication, to a decade of separation, no rom-com is complete without obstacles getting in the way of destiny.

6. An Outfit Faux Pas Or A Clumsy Mistake

From huge panties, to wearing a costume to a party where nobody else is dressed up, rom-coms often feature embarrassment in the form of underwear or an outfit, or a clumsy mistake that causes a ruckus!

7. Someone Learns To Believe In Love

A person who doesn't believe in love, or who has given up on relationships altogether, finds themselves falling in love. Gradually, their heart melts, and that's what rom-coms are all about.

8. Someone Is In Love With Someone They Can't Like Or Shouldn't Be With

When a couple can't be together, for whatever reason, it only makes the attraction between them stronger. Maybe Wilson won't be in love with the prince in her romantic comedy, and instead will fall in love with an unlikely suitor?

At least one scene will take place in the rain, and it'll likely be an emotional roller coaster, filled with declarations of love.

10. Awful Advice Will Be Taken And Ruin Everything

Whether it's a magazine article offering relationship advice, a judgmental friend with way too many opinions, or an attempt at self sabotage, bad advice is often a feature of rom-coms, and it's only when the protagonist looks within and decides what they really want that things start going right again.

11. Besties Will Always Be There For You

Whether the relationship is going well or not, romantic comedies mirror real life when they feature BFFs who are supportive in every situation. Wilson is well versed in playing the bestie or sidekick in rom-coms (How To Be Single, Pitch Perfect, Bridesmaids, Bachelorette) so it'll be fun to see her take center stage in this new movie.

While we wait to find out more details about Wilson's new romantic comedy role, it's a great time to re-watch her entire filmography. You know that I'm right.