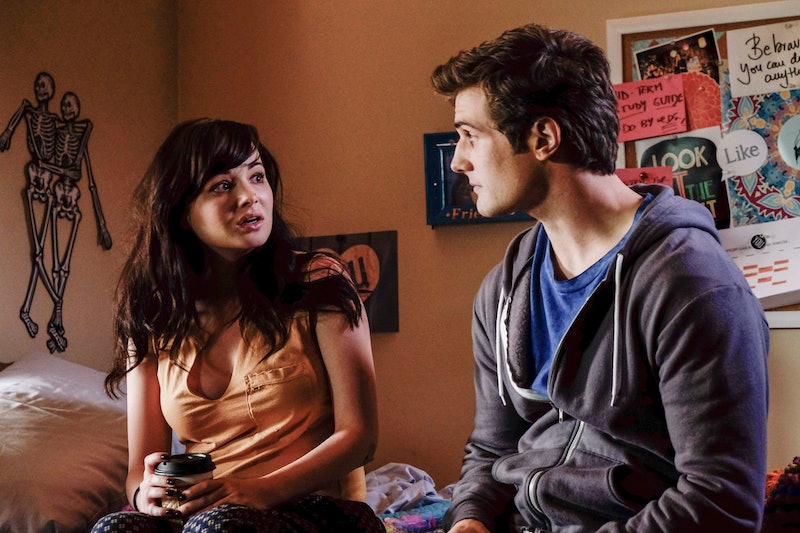 Oh, Awkward. Always the little MTV show that could, the comedy has impressively managed to survive for five seasons. Now the question is, will that streak last? Will Awkward return for Season 6, or will Tuesday night's episode mark the series finale? The answer is much more complicated than you'd probably expect. When Awkward was renewed for Season 5 back in October 2014, TVLine reported that it would be the series' last. When you also add in the cancellation of Faking It and MTV announcing three new comedies, the odds of more Awkward seem extremely low. However, just recently, one of the series' producers gave fans reason to hope.

In a May 23 interview with TVLine, executive producer Mike Chessler said that Awkward's Season 5 finale might not be the show's final episode after all. "We as the showrunners certainly believe there are plenty more stories left to tell, and we're excited about the potential to do so," he said. “But we don’t control the fate of the show. It’s just a matter of MTV deciding what fits into their schedule next year and how many shows they’re going to have. We’re certainly interested, and most of the cast is interested.”

It's safe to say that Jillian Rose, who plays the Tamara on the show, is one of those interested cast members. "I want the show to last forever," she said in another interview with TVLine. "I feel at home with the show and I’m still so in love with these characters and these people who I consider my family. I’d love to do a few more seasons or even a spinoff ... We filmed this season as if it was the last, and I would be happy with the way things end for [Tamara] if this is it."

So what could the sixth season hold for Matty, Jenna, Tamara and the rest, if it were to go forward?

“It would be very different,” Chessler revealed in his interview. “We’d jump ahead in time again, and there have been conversations about having it in a different city with a different feel. The reason I said this episode is the close of one chapter is because, if there were to be another chapter, it would be a very different phase ... We’d really turn the show on its ear.”

It's hard not to get pretty pumped about the possibility of a sixth season, but based on Chessler's comments, it sounds like the show would (yet again) be headed for some very serious changes if it returns. However, that isn't a bad thing, especially considering the interesting growth Awkward has undergone in Season 5B alone. The idea of switching things up again could, in fact, signal a whole new world of possibilities for the characters. So in case Awkward does defy the odds and come back for a sixth season, here are five ways it could move the story in an exciting new direction.

No, literally: move. Send the characters running from Palos Hills, from any college campus, and toss them all with Sadie and Tamara in NYC. If Jenna wants to be a writer, New York is a great place to do it, and considering how great the city has been for Sadie and Tamara, and I'd love to see how Matty and Jenna deal with such a serious change.

If MTV doesn't bring the series back, it could try to find a home for Season 6 on Hulu, Netflix, or Amazon. Going online would also let Awkward push the boundaries of TV even further.

High school and college-set television shows are increasingly a dime a dozen, and considering the cast are all well into their 20s in real life, it would be pretty awesome to see their characters make that growing pain-filled transition to adulthood as a mature bookend to the series.

Move Beyond The Boys

Look, I'm a sucker for romantic drama too, but since Awkward fans have been quibbling over whether or not Jenna and Matty should be/will be together since day one, it would be nice to see her either single or in a committed, serious relationship in the show's next chapter.

Focus On The Friendships

The newfound (possibly short-lived) friendship between Tamara and Sadie has injected some much welcomed joy into Season 5B, and I'd love to see an even closer focus on the relationships between Jenna and her ride-or-dies — and even her frenemies — if Awkward graces us with a sixth season.