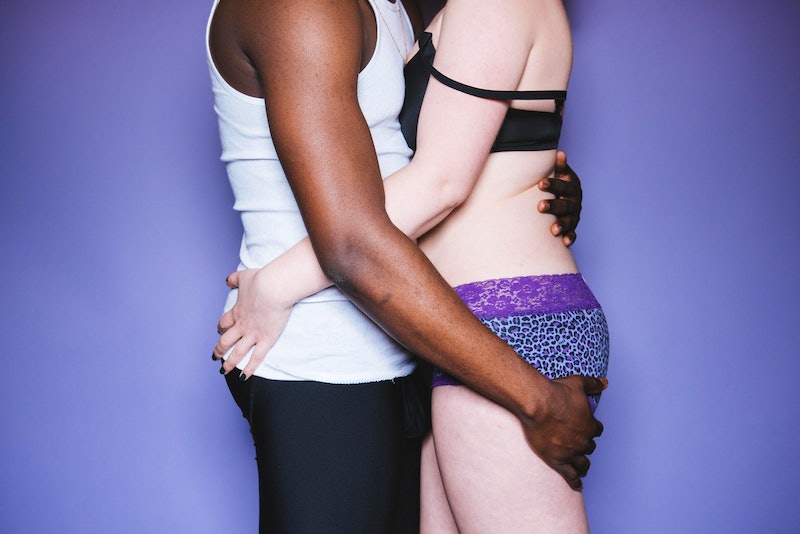 You may wonder how much sex you should have in a relationship, but I think for the most part it comes down to the couple. And now, we can see how personalities within the couple are linked to how much sex they have, with new research from Florida State University. By looking at 278 heterosexual newlywed couples and having them track their relationship — including sex habits for 14 days — they got some insight into how personality affects sex frequency. They also analyzed their personalities using the 'Big 5' personality traits — openness, conscientiousness, extraversion, agreeableness, and neuroticism— and they found a link. For women, at least.

Interestingly, it was only how the wives scored that made a difference — namely in the agreeableness and openness categories. While on average, couples had sex three or four times in those two weeks, the more agreeable and open the wife was, the more frequently they had sex.

"Given that men desire and initiate sex more frequently than women, however, women have been labeled the 'gatekeepers' sex within relationships," Dr. Andrea Meltzer, one of the study authors, tells Bustle. "Thus, it makes sense that couples in which the wife is agreeable, and thus places higher emphasis on interpersonal relationships, or high in openness, and thus more receptive to novelty, reported having more sex."

I thought it was fascinating, but also slightly worrisome that 'agreeableness' leads to sex, because that makes it sound like women are having sex to please their partner, not because they want to have sex. I asked Meltzer about this. "It is unclear whether agreeable women are having sex simply to make their partners happy," she says. "Given that agreeable women place higher emphasis on interpersonal relationships than less agreeable women, this may be possible. Of course, future research is necessary to truly determine women’s motives." I'd definitely be interested to find out.

Here's what else we know about who has more sex, because music matters, too. But first, check out our video on sex positions to last longer in bed:

A massive study of 210,000 people from Johns Hopkins Bloomberg School of Public Health found that couples who use birth control are three times more likely to have sex on the reg than couples who do not. That's a massive difference. The reason may be obvious— not wanting to get pregnant all the time— but it just show how important it is to have access to good birth control.

2. Couples With A TV In The Bedroom

3. Couples Who Listen To Music Out Loud

Research from Sonos in partnership with Apple Music and neuroscientist Daniel Levity found a massive link between music and sex. They experimented with 30 households, where they asked them not to play any music out loud for a week and then let them play it the next week. The result? They had 66 percent more sex when there was music playing. What?! And there was also 37 percent more "awake time" in bed, which I can only assume is pre- and post-sex cuddling. Marvin Gay truly is an inspiration.