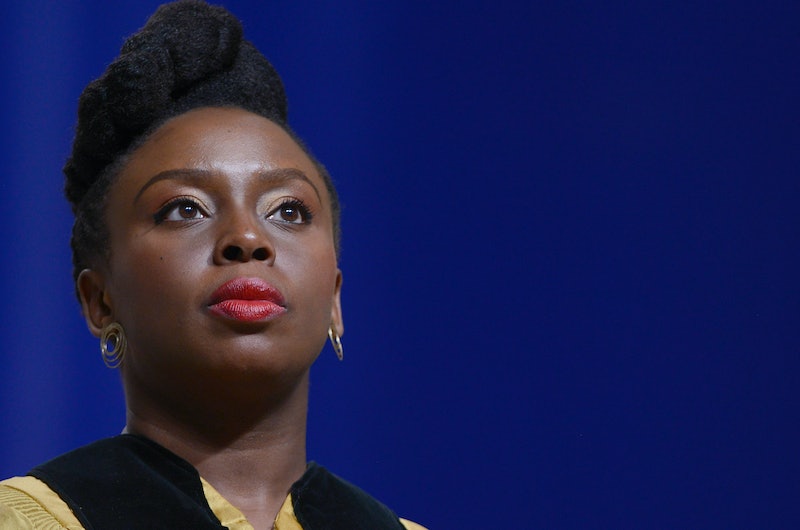 Like Somali-British poet Warsan Shire, Adichie got a popularity boost after Beyoncé sampled her 2013 TEDx Talk in her hit single, "***Flawless." In 2014, she turned the now-famous speech into a slim book of the same name: We Should All Be Feminists .

Adichie has also written several novels. She wrote her first novel, Purple Hibiscus , before she turned 25, and has since followed it up with two more works of fiction: Half of a Yellow Sun and Americanah . Her 2009 short story collection, The Thing Around Your Neck , was a John Llewellyn Rhys Prize Nominee. All three of Adichie's novels have won literary awards.

It's difficult to outshine Adichie's short, shareable essay on feminism, no matter how wonderful her fiction may be — and trust me, y'all, it's fantastic. Read the best quotes from We Should All Be Feminists for yourself below, and share your favorite feminist quotes with me on Twitter. And don't forget to share Adichie's book with someone who needs to learn the importance of feminism.

1. "Culture does not make people. People make culture. If it is true that the full humanity of women is not our culture, then we can and must make it our culture."

2. "Some people ask: 'Why the word feminist? Why not just say you are a believer in human rights, or something like that?' Because that would be ... a way of pretending that it was not women who have, for centuries, been excluded. It would be a way of denying that the problem of gender targets women."

3. "I have chosen to no longer be apologetic for my femaleness and my femininity. And I want to be respected in all of my femaleness because I deserve to be."

5. "And then we do a much greater disservice to girls, because we raise them to cater to the fragile egos of males. We teach girls to shrink themselves, to make themselves smaller. We say to girls: You can have ambition, but not too much. You should aim to be successful but not too successful, otherwise you will threaten the man. If you are the breadwinner in your relationship with a man, pretend that you are not, especially in public, otherwise you will emasculate him."

6. "Masculinity is a hard, small cage, and we put boys inside this cage."

7. "A Nigerian acquaintance once asked me if I was worried that men would be intimidated by me. I was not worried at all — it had not even occurred to me to be worried, because a man who will be intimidated by me is exactly the kind of man I would have no interest in."

8. "Gender as it functions today is a grave injustice. I am angry. We should all be angry. Anger has a long history of bringing about positive change."

9. "But by far the worst thing we do to males — by making them feel they have to be hard — is that we leave them with very fragile egos. The harder a man feels compelled to be, the weaker his ego is."

10. "My own definition is a feminist is a man or a woman who says, yes, there’s a problem with gender as it is today and we must fix it, we must do better. All of us, women and men, must do better."