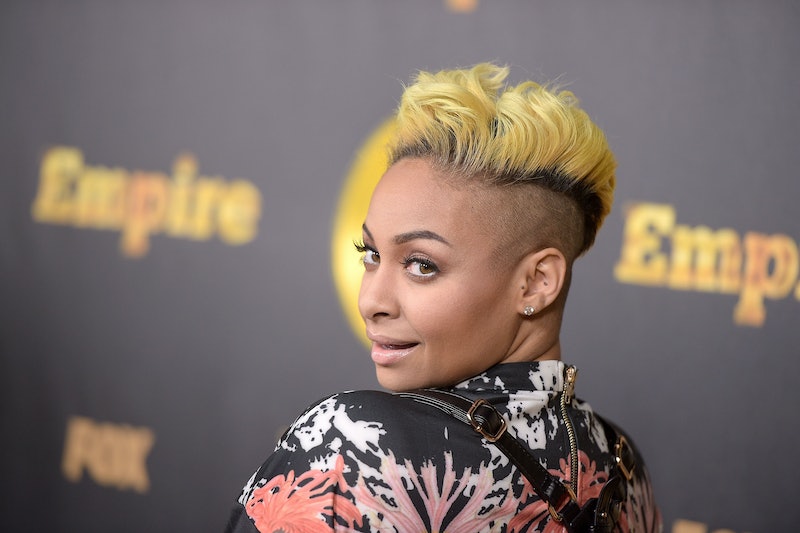 Consider her last album came out in 2008, it goes without saying that it's been a long time since Raven-Symoné released any music — which is why it's so exciting that the actor, singer, and talk show host has uploaded two new songs to her Soundcloud account. She always seems to be incredibly busy. Alongside being a host on The View, Raven-Symoné recently guest starred on Empire and Black-ish. Somehow, she also found the time to record brand new music, making me feel like the laziest person alive. The new tracks, "Cruise Control" and "Sarafina" showcase Raven-Symoné's beautiful voice, and give us a taste of what a new album from the singer would sound like. So what do the "Cruise Control" lyrics?

On Soundcloud, Raven-Symoné describes "Cruise Control" as "A soft melodic transparent story of sex and speed filled with ambient sounds and undertones of sexual frustration," and the song does not disappoint. The track starts out incredibly pared down, showing off Raven-Symoné's vocals against a spare backdrop. The intensity of the song increases as backing vocals kick in, making "Cruise Control" a track you want to keep listening to. And Raven-Symoné's description of the song makes it sound intense.

From the start of the song, the driving analogies are on fleek. With her "heart racing" and an insistence that the other person doesn't "tap the breaks," Raven-Symoné's message in "Cruise Control" is clear. It's about pushing a relationship to the brink, experiencing everything you possibly can, and letting the other person take control. The "sex and speed" the singer details in the song's description is clear from the beginning. The track seems to be about excitement, about not leaving your partner "unsatisfied," and throwing caution to the wind.

The chorus continues where the verse of "Cruise Control" left off, with the singer announcing that she's now "on cruise control," succumbing to passion, letting what happens happen. By "letting go," she's in the moment, experiencing everything that is happening, and no longer over-thinking things.

Buckle up and lock the doorYou know what these keys are forTread count's goodNo slips when you're drivingRolling up on this checkpointDirty blues always kill the mood, fuck itInvite 'em in 'til we're going throughIt's a top pursuit yeahTop's back and the sun's risingDriving 'til the horizonUnless you lay downI ain't messing, speed downAnd we're on the road and I'mDriving until there ain't no lightsSwerving through the night butThe glowing's alright with you

While it's not totally clear, the second verse places us much more in the setting of a car. While some references seem to allude to sex, and a relationship with another person, we're very much placed in the vehicle "driving 'til the horizon." It sounds as if the couple stay up all night, "driving until there ain't no lights," alone together in the darkness. Which sounds romantic, and a little creepy.

It's exciting to hear new music from Raven-Symoné, and hopefully these new tracks are a sign that the artist has a brand new album on the way very soon.