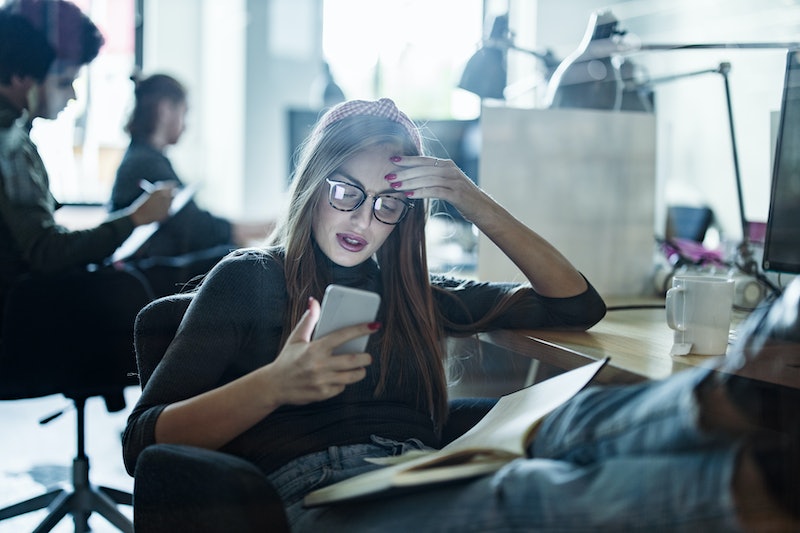 Jealousy isn't called an ugly, green-eyed monster for no reason — and the truth is that more often than not, it's one that tends to stay hidden under the bed. Sometimes, the feeling of envy is very intense and you're aware of it, but a lot of the time, people operate from a place of believing they aren't worthy of the things other people have (and they do not). So many of our micro-expressions and passive-aggressive behaviors are rooted in jealousy, that even when we aren't immediately grappling with it, it's something that everyone could understand better.

The premise of feeling jealous of someone else is believing that they a) have something you have and will not have, and b) they have something you cannot, or are not worthy of having; it's one of the two. Dismantling your conscious and subconscious jealousy has to do with acknowledging your desires, acknowledging why you believe you aren't able to have what you desire, and then taking actions to show yourself — and make it proof to yourself — that you can, in fact, have those things.

What we all need to realize is that there is plenty of love and wonder and joy and success to go around. One person's beauty doesn't make you less attractive, the fact that your partner once loved their ex does not mean that they love you less because of that. In realizing that you don't have to compete for the things you want, you can free yourself from the idea that you are only as good as you are better than someone else. That mindset will not only keep you small, but it will keep you on a pinwheel wherein your only goal is to be slightly superior to an idea in your mind, rather than the person you used to be (and need to evolve from).

Why do you believe that someone else can have the thing that you truly want? Is it because growing up, you felt like you were always losing to the "cool kids," or because of some other external factor in your life? Has anybody ever actively told you that you can't have something you are striving for? Once you figure out exactly what it is you're resenting, you can work backwards to understand why you have somehow unconsciously convinced yourself you can't have it.

Often, when we actually attain what we want, we forget that we ever wanted it in the first place. This is the root of greed, and where a lack of gratitude takes root. It's very easy to remain focused on the next "goal," the next thing to achieve, earn, or fix — but if you do that, your life will be spent perpetually in a state of not being good enough, rather than being grateful for what you have (while still working for more).

Come Up With A Plan For Achieving What You Don't Have

You'll have a lot less time to be jealous of other people if you're too busy working toward actually getting the things you think they can have and you can't.

Seek Out The Best In Others, Then Verbally Or Otherwise Support And Affirm Them

For whatever reason, this is an almost instant cure for envy.

Remember That Everyone Suffers

There's a saying that goes: we do not take into consideration the suffering of those we feel jealous of. What this means is that not only do we not focus on how they likely worked to have the things they have, but also we don't see them as whole, dimensional human beings. We forget that they, too, have hard times and issues and that nothing is as perfect as it seems. It's the delusion that it is that hurts us most.

Jealousy is a product of over-analyzing people's lives, and making assumptions about what they mean about yours. Just stop judging people so much; it's not fair to them or to yourself.

Being jealous means you desire a sense of superiority (and feel threatened that you perceive someone else to have that superiority). This is not a great quality to have. Remember that even when you are successful, or in the position that the person you envy is in, it's not good to let it go to your head. Learn to be humble now.

Stop Thinking Everyone Else Is Thinking About You, Or Evaluating Your Life

Want to feel really super free? Consider this: nobody actually cares as much about your life as you do, and nobody is thinking of you other than in random, passing thoughts now and again. That spotlight you think is on you constantly? It's all in your head.

Run Your Own Race

Flowers don't think of competing with the flowers next to them, they just bloom — you know how the saying goes. The goal isn't to be better than other people, it's to be better than you were before. Feeling jealous of other people's accomplishments is a pretty solid sign you're not focused on the right thing.

Ask Yourself If You're Honestly Working Hard Enough On Your Life

Most people who experience a lot of jealousy are not, in all honesty, doing what they know they should and need to be doing. They are focused on how angry they are that someone else seems to have already arrived at the end-goal, all while not prepping to do the work to get there themselves.

Focus On Connecting With People, Not Being Superior To Them

If you enter social situations with the intention of speaking with people to understand them better, or learning something you didn't know, or simply enjoying another person's company, you will focus on connecting – which you are not doing when you are feeling jealous and envious.

Most people exist in the idea that love happens on a scale: there's only so much to go around, and the people who are the best get the most, or are "chosen." But every single one of us has, and is meant for, our own kind of love in a life. We have love that comes from friends and family and ourselves that is meant only for us. The solution is not about fighting for an idea of what it means to be loved, it is opening yourself up to feel what you already have. That is how you make it feel like enough.