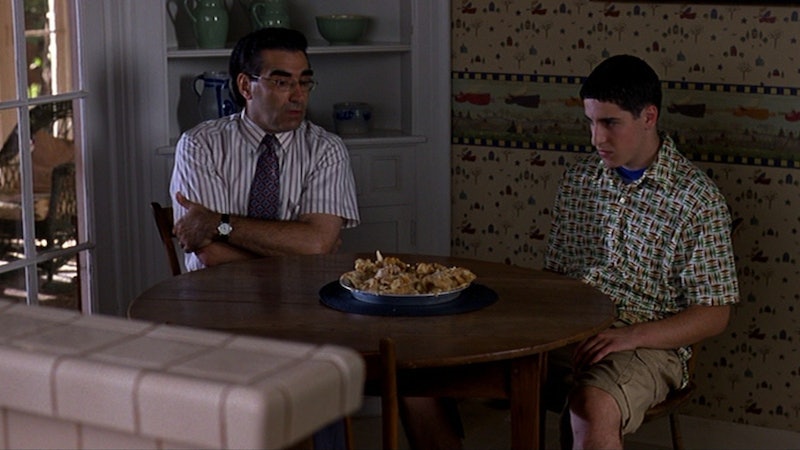 It can be hard to remember that there was a time before Netflix, when movies were physical objects and you had to go somewhere to get them. No streaming, just bulky VHS tapes that you had to individually check out from a store. Although it might seem like a preposterous concept now, when you were a kid, those trips to get '90s movies at Blockbuster were the best. All the shiny movie posters, the excitement of the "New Releases" wall, the aisles of shelves of movies all conveniently sorted by genre and alphabetical order...it was the stuff of '90s kids' dreams.

However, perhaps the most enticing things at the video store were the things you weren't allowed to have. And I'm not just talking about that pre-packaged cotton candy in a bag. The goal of most Blockbuster trips was to try to get your parents to let you rent something cool, like the latest slasher flick or a mature teen movie. But no matter how much you argued that a certain movie was educational, or strategically held the box to cover up the "rated R" sticker, your parents weren't buying it (literally or figuratively). Here are some of the most memorable '90s movies you unsuccessfully tried to convince your parents to rent.

1. I Know What You Did Last Summer

Your parents didn't think that a serial killer with a hook hand made for appropriate children's entertainment.

The F word appeared exactly once in this movie, but that was enough to place it on many parents' "never rent" lists.

3. There's Something About Mary

You folks just really didn't want to have to explain the hair gel scene. Do you blame them?

There was just a little too much gunfire in this one for your parents to be OK with it.

No matter how many times you tried to justify to your fam that this movie was based on The Taming of the Shrew, they weren't buying it.

The partial nudity made this movie a no-no in many families, while others fast-forwarded through the portrait scene to get straight to the ship sinking.

Having lived through the '70s, your parents were not about to let you watch a movie about the era.

Again, Tarantino movies never quite made the list for parental approval.

You might have successfully gotten this one out of the video store, but your mom refused to let you watch it after realizing its high content of teenaged sex.

You knew it would give you nightmares, but you still really wanted to see this trendy movie with the mask-wearing murderer.

Your parents didn't even let you try to explain why they should rent this one.

Even more cruel than the characters in this movie was the fact that your parents would never let you watch it.

Your parents didn't condone Brad Pitt and Ed Norton kicking the crap out of each other.

The candy-colored videotape cover disguised a sex-filled dark comedy. Your parents saw right through it.

Your parents knew that if they let you watch this Stephen King adaptation, you would be sleeping in their bed for a month.

This intense adaptation of Susanna Kaysen's memoir was deemed "too mature" for family movie night.

Your parents shot this one down after learning that it had originally been rated NC-17.

18. Silence Of The Lambs

I fully support your parents' decision of not letting your grade school-aged self watch Hannibal Lector eat a guy's face.

Your parents didn't want to take the risk of letting you watch this movie and then having to pick you up from summer camp when you became convinced that the Blair Witch was lurking outside your tent.

It's not even that your parents thought that this movie would be too scary; they just thought that the plot twist would go over your head and it would take too much effort to explain it.

This mob movie was critically-acclaimed, but your parents were critical of your idea to rent it.

Based on the description on the box, your parents didn't totally understand why this movie was rated R, but they avoided it nonetheless. Nowadays, a simply Google search would reveal to any curious parent that this movie is, in fact, very dirty.

Another Ed Norton movie that you weren't allowed to watch in the comfort of your own home.

If there was one movie that your parents were not going to let you walk out of the video store holding, this was it. They knew it, and you knew it.

Nowadays, you can watch any movie you please, and your parents' input doesn't matter. You also don't have to go to the video store — or even leave your bed — to find the movie you want. But don't deny it: there's a little part of you that misses those Blockbuster trips and all of the forbidden fruit that laid just on the other side of those weird-smelling plastic VHS covers.