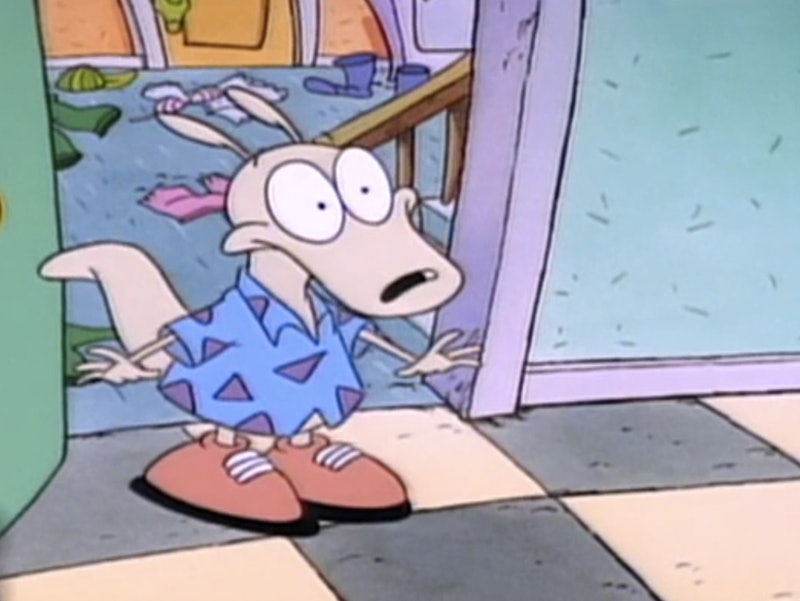 The ‘90s, or as I like to call them, the Golden Age of television, were a fleeting moment of pure awesomeness that can simply never be replicated. Nickelodeon ruled the airwaves with shows like Doug, The Ren & Stimpy Show, and Rugrats. Before everyone got so damn touchy, showrunners pushed the boundaries with cartoons on the kid-oriented network that were super-questionable for young children to be watching. Ren & Stimpy certainly paved the way for this type of badassery, but it’s time for the equally epic Rocko’s Modern Life to get the credit it deserves. If there's any one '90s TV show that doesn't get enough credit, that show is Rocko’s Modern Life.

From 1993 to 1996, the show totally held its own, and, little did we know, encouraged us to think outside the box (like really, really far outside of it), and wave our freak flags high. Following the life of Australian wallaby Rocko (new to the U.S.) and his pack of weirdos, the show, which still doesn’t entirely make much sense as an adult, exceeded in making mundane aspects of life a lot more exciting. Creator Joe Murray definitely didn’t hold back in making things extra weird back then, because, in the fictional city of O-Town, the more normal things were, the more boring. Here's why Rocko's is one of TV's most underrated shows ever.

1. It Expanded Our Minds In The Opening Credits Alone

I really don’t know what the hell is going on here, but I know that I’m excited and I won't look away.

2. And Nipped All This Diversity Talk In The Butt

Rocko’s squad was made up of all different colors, shapes, sizes, and breeds. His BFF Heffer was a junk food and sex-loving cow, his other BFF was the neurotic, nerdy turtle Filburt, and, of course, he always had his dog Spunky by his side. Perhaps our first lesson in variety is the spice of life.

3. Speaking Of Diversity, We Got A Taste Of The Land Down Under

Guess you can say we kids in the U.S. of A were pretty cultured toddlers while following the footsteps of an Aussie who also happened to be a wallaby, giving us a flare from down under while grasping American life. But, seriously, what's a wallaby?

4. It Served Up Serious Realities Of The Grown-Up World

The LA Times once called Rocko "a child moving into an adult world." We were right there with him. In the most unlikely form of education, we learned about what adult life in the modern world was like. Take this harsh fortune, or O-Town's "Conglom-O Corporation" that had the slogan: "We own you." It got real super fast. Can't say we weren't prepared for adult life.

5. It Also Served As The One And Only Sex Ed Class We Ever Needed In Life

Serious kudos to Murray and his team, who managed to deliver sexual innuendoes and raunchy double entendre up the wazoo on a kids' show, and only got censored a few times. If you don't remember Rocko's "Oh Baby"s during his stint at a "Be Hot, Be Naughty, Be Courteous" phone line business, or trips to the Chokey Chicken, watch the video above repeatedly and bask in the glory of mild brainwashing.

6. It Still Taught Us How To Make The World Our B*tch

No matter what unfamiliar territory Rocko and his crew found themselves in, they were never defeated and always managed to keep their crazy personalities intact. Goals.

7. The Show's Legacy Lived On Even After Its Run

Much of the show's staff joined forces after Rocko's to create shows like SpongeBob Squarepants .

8. There Was No Such Thing As Weird

You may have been a little scarred from things you witnessed on Rocko's as a small child, but you can't deny that the possibilities for imagination were truly endless. I feel like it explains a lot about who I am as an adult, honestly. So, keep your Powerpuff Girls and your Clarissa Explains It All. Rocko's Modern Life doesn't get enough love, but it should, because it, more than anything else, taught us the true meaning of misfits.