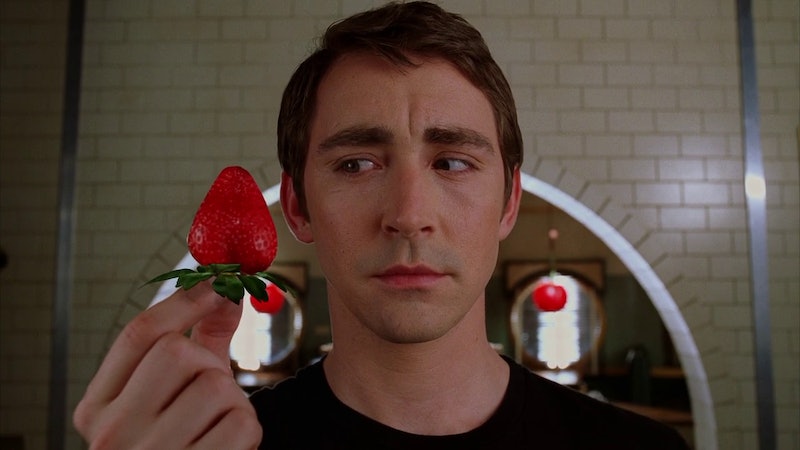 It did not just set up what was to come in the series, the pilot stood on its own as an amazing hour of television. It was visually stunning and instantly different from anything else on television at the time. From the opening moments when young Ned's gift was explained to the end which brought Chuck in on Emerson and Ned's private investigating work, the hour felt like a beautiful, self-contained story. There was romance so sweet it made your heart ache, fast dialogue, and vivid characters — it had everything you could possibly want from a premiere episode, with an extra touch of magic that was distinctly Pushing Daisies.

In case you need a reminder of just how wonderful the pilot was, here are 11 reasons why Pushing Daisies pilot is TV's best pilot ever.

Pushing Daisies set the tone for the entire series by calling the pilot episode "Pie-Lette." You knew just from the title alone the series was not going to shy away from being quirky and embracing its uniqueness.

2. The Narrator Turned Exposition Into A Natural Story

Pilots are usually full of clunky exposition explaining who everyone is and how they know each other. Pushing Daisies got around the clunkiness of it all thanks to the fairy tale style narration from Jim Dale. Listening to Dale reveal the secrets to Ned's gifts felt natural and enchanting instead of forced.

3. The Visuals Were Breathtaking

The first thing the pilot did was draw viewers in with its distinctive visuals. The show was full of bright colors and a sense of whimsy that was absolutely entrancing. It felt like stepping into a completely realized world, and precious few shows ever pull such an immersive feeling off in their first hour.

Remember, the first thing you ever saw on Pushing Daisies was little Ned running through a field with Digby and then Digby promptly being hit by a truck. The very first scene evoked strong emotions from everyone watching. I honestly cannot remember another show making me cry so fast.

The pilot's biggest challenge was making Chuck and Ned's love feel epic enough to build the episode around. How many times have you watched a pilot and been frustrated by a forced romance? If you are me, the answer is lots. Chuck and Ned's love was so innocent and pure it was impossible not to fall for them, even though it meant Chuck's life would have to be paid for with someone else's.

6. The Character Introductions Were Brilliant

Emerson discovering Ned's gift totally by accident, little Ned and Chuck's tragic childhoods, and Olive being her flawless Olive self — each character felt distinct and fully formed the moment you met them.

Despite the gorgeous colors and slapstick comedy, Pushing Daisies started at a place of sadness. Ned didn't allow himself to be close to anyone, Chuck's first time out in the world led to her being murdered, Olive was in love with someone who didn't love her back, and the Aunts were broken without Chuck. Pushing Daisies was never a dark and dreary show, but it embraced the natural sadness of life while still creating a fun story.

8. And It Was Unapologetic About Its Quirkiness

Pushing Daisies knew exactly what kind of show it wanted to be. It was completely normal for the characters to perform conversational ballet with their screwball comedy style quips, and physical humor was a huge part of the storytelling. This was a show where corpses talked and the main character built a wooden hand to pet his dog, and it made no apologies for it.

9. The First Case Was Personal

The first case the show tackled was Chuck's death, and by making the case so personal it both connected you to the characters in an organic way and got you used to how the cases would play out each week. There was a procedural element to Pushing Daisies, but it was clear the show was much cooler than your average CSI.

10. Digby Was Totally The Star

If you want your pilot to stand out, add an adorable, undead dog. Digby's presence in Ned's life was such an important and beautiful element of the story. Digby added way more to the pilot's emotional storytelling than he gets credit for.

11. It Gave The World Olive Snook

No other pilot episode in all the land had Olive Snook in it, and I think everyone can agree Olive is the best.

Pushing Daisies' pilot is like a short film. It is poetic, moving, funny, and full of beautiful character moments. It is just as special as the show is, and quite possibly the most well-crafted first hour of any show out there.