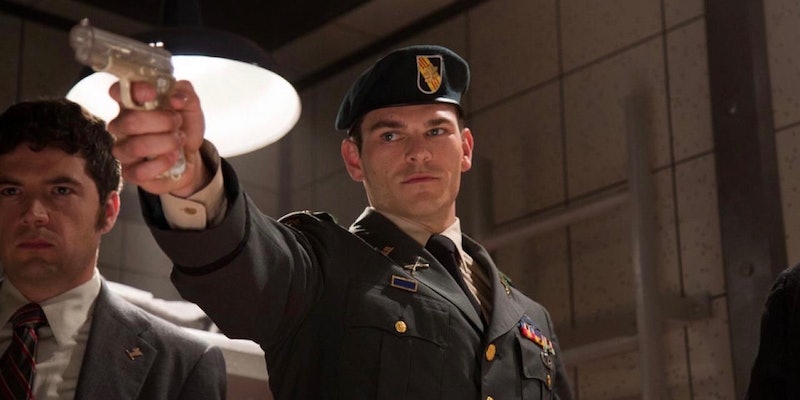 For all the good Wolverine did when he went back in time to save the world in X-Men: Days of Future Past, one baddie he couldn't keep from existing was William Stryker. Stryker, who has been a character in the X-Men films since his debut in 2003's X2, had a brief, but effective cameo in DOFP. And now Stryker is back for X-Men: Apocalypse, and, though he hasn't changed much, it's likely there are more than a few audience members out there who won't recognize him. After all, the X-Men universe is packed full of characters, mutant and otherwise, so a few are bound to fall through the cracks of our memory. So, if you're sitting in the theater asking yourself who X-Men: Apocalypse's Major Stryker is, here are your answers.

In Days of Future Past, set in 1973, a young Major Stryker (played by Josh Helman), was working for scientist Bolivar Trask and even attempted to capture Havok in Vietnam so that Trask could experiment on him. Luckily, Mystique swooped in and saved Havok, and a handful of other mutants, before Trask and Stryker could get their hands on them. Stryker is back in X-Men: Apocalypse, and, while he's still played by Helman, and still in the military (and still evil), some fans might have forgotten his larger role in the X-Men universe.

Stryker might have seemed like a fairly harmless soldier in Days of Future Past, but fans of the earlier X-Men movies know that he is anything but. An older version of Stryker first appeared onscreen in X2 played by Brian Cox. In that film, Stryker was one of the main villains — a man determined to kill mutants, while also wanting to use them as weapons. That movie also revealed that Stryker was the one who spearheaded government experiments on Wolverine, specifically the one that game him his adamantium skeleton (aka his metal claws).

Stryker's history with Wolverine was later explored in X-Men Origins: Wolverine, though Days of Future Past appears to have altered that timeline (it's complicated) and potentially made that movie irrelevant. Stryker's appearance in Apocalypse appears to at least try to address all the confusion caused by DOFP. Supposing the events of DOFP changed the course of Wolverine's journey to getting his adamantium skeleton, thus potentially altering his relationship with Stryker, then Apocalypse acts as a bit of a course-correct.

In Apocalypse, Stryker, who has now been promoted to Colonel Stryker, is still up to his anti-mutant tricks (spoiler alert). He swoops in mid-movie to kidnap Mystique, Quicksilver, Moira MacTaggert, and Hank, and, in the process of breaking them out, Cyclops, Jean and Nightcrawler run into a beast referred to as Weapon X — Wolverine. Though the film doesn't explain Wolverine's backstory really, it's clear that the original story of Wolverine getting his adamantium claws form Stryker is in tact.

With the future of the X-Men franchise up in the air, it's unclear whether or not we'll continue to see more of William Stryker in the future, but his close relationship with Wolverine suggests he'll be back for more.