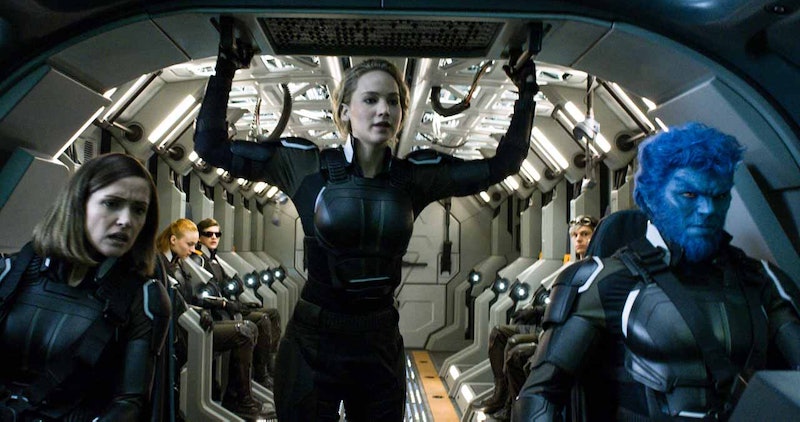 As someone whose childhood spent reading X-Men comics made me into a massive Marvel fan, the X-Men will always hold a special place in my heart as my most beloved heroes. I've seen every X-Men movie that's come out in the theater, I know the characters as if they were members of my own family, and I'm looking forward to seeing X-Men Apocalypse . However, I can't help feeling that the franchise has lost its way, especially compared to what's going on with the rest of the Marvel Universe at the movies. And I think the only thing to be done about that is to give the X-Men movies a hard reboot.

There are few who would deny that the Marvel Cinematic Universe has run laps around their Fox-housed brethren in terms of box office returns, critical acclaim, and fan excitement. Just look at the amount of buzz Captain America: Civil War has received compared to that of X-Men: Apocalypse. And that's not to say the latter is going to be a bad movie; it's just that the entire X-Men franchise is in need of a makeover in order to get the fans back on board with the series. So what are the issues, and how can they be fixed? Let me explain.

The main problem with the X-Men films is their total lack of continuity. Characters like Angel, Nightcrawler, Cyclops, Sabretooth, and Deadpool have all seen iterations of their personas that completely disregard and contradict their previous appearances. The timeline is also confusing and doesn't add up. Patrick Stewart is Professor X, while James McAvoy is also Professor X, since some films take place in the present while others take place in the past. However, the consequences of neither era are ever really felt. Professor X died in X-Men: The Last Stand, but was back as if nothing happened in The Wolverine. Wolverine lost his claws in that film, but had them back with no explanation in X-Men: Days of Future Past. Mystique and Professor X are revealed to have been childhood friends in X-Men: First Class, a friendship they maintain for at least the next two movies, and yet the two never acknowledge any kind of relationship in the X-Men movies that take place after those films chronologically. I could go on, but you can see how this is all a little confusing.

How To Fix It: Start over and keep it consistent. Disregard the past decade and a half of X-Men movies and begin anew. If you look at the MCU movies, actions have consequences and everything adds up. Even when characters change actors (like with the Hulk) that doesn't negate what happened to that character in the past. When the X-Men movies began in 2000, they probably weren't expecting to last 16 years as a franchise, so that's probably why the continuity wasn't given much attention. But times have changed, and fans want a cohesive story that makes sense.

Perhaps the best way to illustrate this point is with the expanded role of Mystique in recent films. When Jennifer Lawrence made her debut in the role in 2011's X-Men: First Class, she was an extremely talented young actor — but she wasn't J.Law yet. The next year, she starred in The Hunger Games and began her ascension toward becoming the world's biggest movie star. In what was seen by many as a way to capitalize on her fame, she was given the most pivotal role in X-Men: Days of Future Past with the entire story hinging on her, which resulted in her saving the day, and in X-Men: Apocalypse she takes on a leadership role with the X-Men. In comics lore, though, Mystique is a villain of the X-Men in almost all of her appearances. She's certainly not their leader, and is nowhere near being the main character of the franchise.

So since the films are elevating the character's importance so greatly, you'd think they would at least keep her as Mystique. Instead, Lawrence has appeared less as the blue mutant in each subsequent film, and spent more time just looking like Jennifer Lawrence and being called by her birth name of Raven — both betrayals of the character's proud mutant identity. Just imagine if a big name actor, before he was famous, had been cast in the role of Peter Pettigrew in the Harry Potter movies, and then to capitalize on his newfound fame he became the hero and main focus of the story, turning all handsome and going by the name of "Petey". Not cool, right? That's essentially what's happened with the X-Men movies, as the current main character of the franchise is someone who resembles no one from the comics in either appearance or personality.

How To Fix It: Look to the comics. The X-Men have a ton of great characters, maybe even too many, who deserve to be accurately represented on screen. The franchise shouldn't have to essentially invent a new main character just to capitalize on an actor's stardom. And if you want proof that being faithful to the comics is profitable, just look at Deadpool. That film, which had a quarter of the budget of Days of Future Past, now ranks as the highest-grossing X-Men film ever. And the main reason for that is because the filmmakers strived for comics accuracy in a way that the other X-Men movies have not.

Too often, and more increasingly as time wears on, the film franchise has focused on only a handful of characters (Wolverine, Magneto, Professor X, and now Mystique) at the expense of the others. Mutants are cycled in and out of the team with little regard for anything but their powers, and fans are left without a core team to call their own. The only real member of the X-Men who is returning from Days of Future Past for Apocalypse is Beast. Why is there only one member of the X-Men? Most of the team's other members over the years have never been given much to do. For example, Storm is an excellent and complex character in the comics, but I can't think of one memorable thing she's done in the movies. She's just kind of there to make the weather change once in a while, and that's a shame for what is a consistently strong female presence in the comics.

How To Fix It: Pick a team and stick with it. The diverse '80s team of Cyclops, Jean Grey, Storm, Wolverine, Colossus, Nightcrawler, and Kitty Pride seems like an ideal place to start, since it's full of very distinct and engaging characters the audience could grow attached to. But sticking with a team is only half the battle; they still have to treat those characters with respect. For that, Fox should again look to Marvel. Every character in the Avengers movies is given their own time to shine and their own distinct character traits; they're not just there to showcase their powers and then disappear. If the X-Men movies invest in their characters, then fans will invest in them, too.

While the racial allegories are an important part of the X-Men, they're not the only part. By this point everyone knows that people hate mutants and that there is always someone in the government out to get them. In fact, there has been a government official as a villain in almost every single X-Men movie so far. Senator Robert Kelly in X-Men, Colonel William Stryker in X-2, Stryker again in X-Men Origins: Wolverine, Bolivar Trask in Days of Future Past, and Stryker for a third time in Apocalypse.

How To Fix It: Again, look to the comics. The team doesn't spend a ton of time fighting lawmakers in the comics, and there is no shortage of exciting and different X-Men adventures that would be a blast to see on film. I want to see the X-Men in space fighting the Brood and meeting the Shi'ar, I want to see them discover the Savage Land and battle Sauron, I'd even love to see the "Age of Apocalypse" timeline when it becomes time to shake things up. There are so many great comics stories featuring the X-Men, and they should really be explored more.

While the dream of many fans, including me, is to see the X-Men folded into the MCU and creatively handled by Marvel, it doesn't seem like that's going to happen anytime soon. But since Hugh Jackman and Lawrence reportedly want out of the franchise soon anyway, now seems like a good time to start fresh, in the present day, with an entirely new group of X-Men — consisting of all new actors. The X-Men movies have a ton of potential to be just as good, if not better, than the MCU, and I for one would love to see it happen.