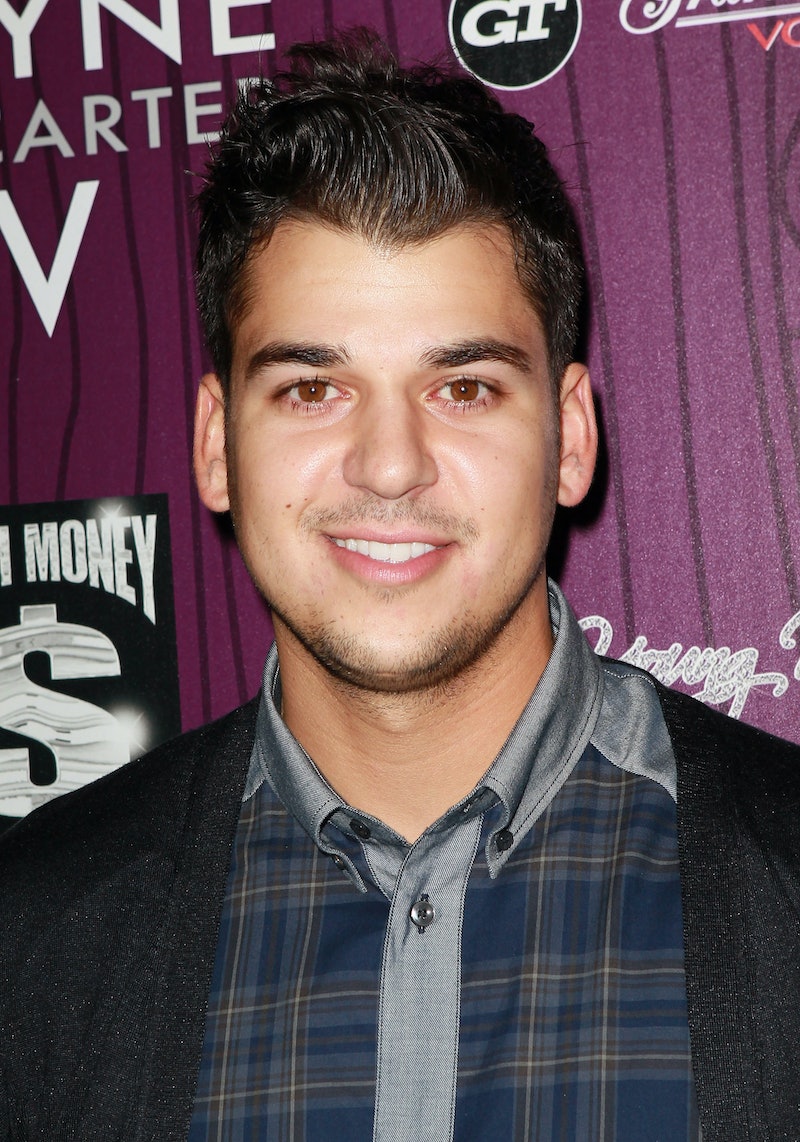 It's not news that former Keeping Up With the Kardashians star Rob Kardashian has struggled with his weight. It's something that has been both featured on his family's reality series and in the media. Well, on Wednesday, Rob Kardashian reflected on his weight loss in an Instagram that speaks volumes for the 29-year-old sock designer. Not only did he share a before and and after photo showcasing his weight loss, but he captioned it, "LOL ‼️ still got a lot of work to do and weight to lose but glad I'm getting better :):):)" For those who follow the Kardashians and have paid close attention to Rob Kardashians' journey, then you know that this is a huge step for him.

Even though some might not understand why Kardashian is laughing at himself in his caption, the fact that he is talking about his weight loss with a smile shows that he is in a much happier place than he was a few years ago. It also shows that Kardashian recognized he needed to make a change and is now doing that. Plus, the fact that the former Dancing With the Stars contestant realizes he still has a long road of a him shows that he isn't giving up anytime soon.

Before walking this now positive path, Kardashian wasn't doing so well. In December 2015, a source told People, "Rob is still struggling and it makes the family sad. He deals with depression, weight issues and low self-esteem, but that's been going on for a long time."

Repeatedly, Kardashian's changing attitude and behavior was showcased on KUWTK. There was even an episode where Kris Jenner, with help from Khloé Kardashian and Kim Kardashian, tried to stage an intervention for Kardashian, who they had said gained over 100 pounds in the past year and was being reclusive. During the episode, Jenner said, "I cry myself to sleep literally every night worrying about [Rob]. It's breaking my heart."

Now, that seems to have all changed. It's great to see that Rob is going out in public and doing it with his head held high. Remember when he was living behind closed doors and reportedly cut all ties with his family? He's come a long way.

Also, it sure seems that finding love has helped Kardashian. Now that he is engaged to Blac Chyna and they are expecting their first child together, it's something for him to look forward to. In an April Instagram showcasing himself and Chyna, Kardashian wrote, "Looking from where I started 298lbs to my current weight now 248.4lbs ) I'm focused and determined to reach🏽 my goal weight 200-205lbs .... Happy I found my motivation." That sure sounds like Chyna is motivating him to live a more positive life.

It's wonderful that Kardashian is doing so well and looking to a brighter future. It sure seems like he has really turned his life around for the better.