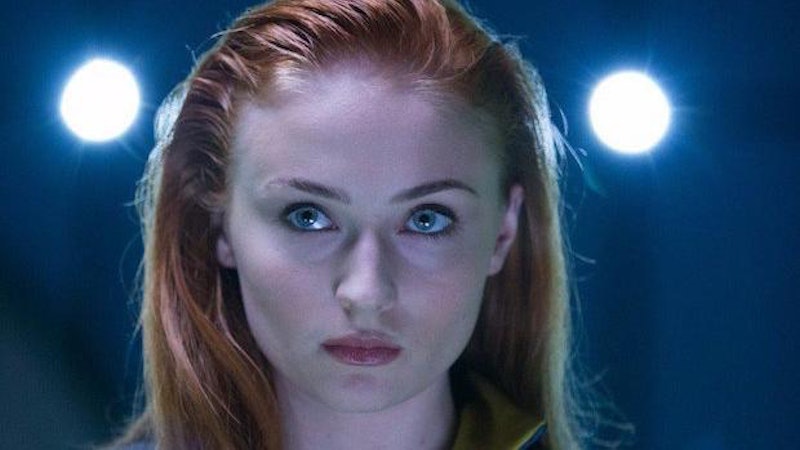 After a 10-year absence as a central character in the X-Men film franchise, Jean Grey is back in a big way in X-Men: Apocalypse. Now portrayed by Game of Thrones star Sophie Turner, this young incarnation of the powerful mutant joins the X-Men in the new film alongside young versions of other familiar characters like Storm, Nightcrawler, and her eventual love, Cyclops. But fans know there's another side to Jean Grey — a dark side — and are wondering when that might show up on film. So, when will Jean Grey become Dark Phoenix?

By the sound of things, fans might not have to wait that long. Although X-Men: Apocalypse has just introduced this new, younger version of Jean, the film includes some clues that Dark Phoenix is already coming down the pike. At one point in the movie, Jean even says (small spoiler!) something about a dark force that she feels growing inside of her — not the subtlest of hints. Fans will recall that a version of the Dark Phoenix saga played out in X-Men: The Last Stand, and wasn't terribly well-received. No one knows that better than producer Simon Kinberg, who co-wrote that film, and who really wants another chance at telling that tale. "I definitely would love to take another stab at the Dark Phoenix story," he told Entertainment Weekly.

Also speaking to EW was Turner, who seems definitely game for her character to take a darker turn. "The seeds of Phoenix definitely are planted in there," she said. "She can’t control her powers unless she either fully stops them or lets them all loose, and that’s kind of Phoenix. I think in future movies to come we’ll definitely see a bit more of that." One major criticism among fans about the way Phoenix was handled in The Last Stand is that the force was represented as a dark part of Jean's personality that was suppressed by Professor X, while in the comic book version of the story, the Phoenix Force is a separate entity that comes from outer space and inhabits Jean. So if the Phoenix does reappear in the movies, which it sounds like it will, will fans get to see a version that's more in line with the comics?

Probably not. Apocalypse director Bryan Singer, who is the chief shepherd of the X-Men film universe along with Kinberg, is looking forward to getting his chance to explore Dark Phoenix on film (he did not direct The Last Stand), but seems dismissive of the outer space angle, instead being more interested in seeing the force come from inside Jean herself again. "The full Phoenix story ... I would have to re-explore that," Singer told Adam Chitwood of Collider. "If it’s already been explored, to re-explore and retell it. Plus the Phoenix story in the comic book has the Shi’ar Empire and the moon ... With that you never know, but as far as the idea of that brewing within her, without giving anything away I would say absolutely that interests me and you may find a piece of that in [X-Men: Apocalypse]."

So it seems like some version of Dark Phoenix is definitely coming to the new generation of X-Men films, and given that hints of her presence are already included in X-Men: Apocalypse, it's probably going to happen sooner rather than later.