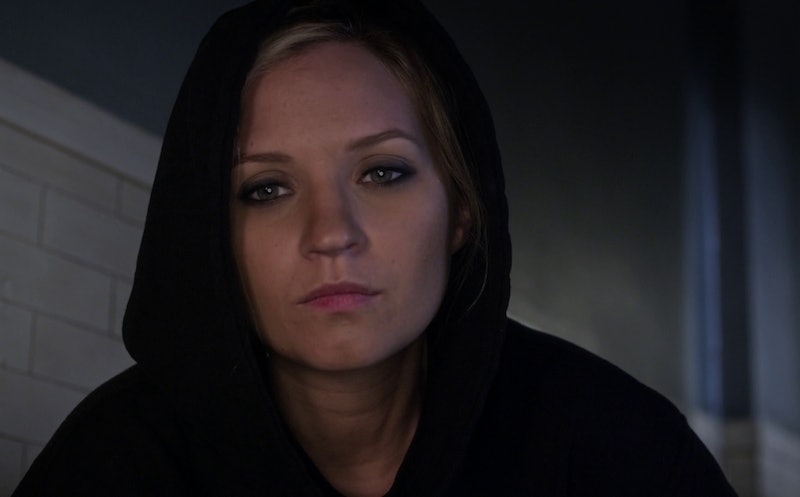 With the end of the Uber A storyline steam rolling our way, Pretty Little Liars is dropping massive reveals left and right. The Season 6 finale certainly featured some of the most insane moments fans have ever witnessed on Freeform's mystery drama. The long-speculated Pretty Little Liars twin twist was finally revealed, with Jessica DiLaurentis being the one with the double. An equally as upsetting twist, too, was the truth about Alison's new husband, Dr. Rollins: It turns out that the good doctor is anything but a good husband — Dr. Rollins revealed that he only married Ali to steal her shares of the Carissimi Group, and that it was really Charlotte that he loved. Right now we don't have any details about Dr. Rollins' relationship with the former Big A, but their relationship is making me consider one pretty tragic theory — was Charlotte supposed to marry Dr. Rollins in the bell tower?

Looking back at the beginning of Season 6B, it makes a strange amount of sense. The night that Charlotte was released from the mental institution was the same night that someone killed her in the bell tower. We still have no idea why Charlotte would end up in the church in the middle of the night, but we do know that she snuck out of the house when Ali was asleep — presumably next to Dr. Rollins, as Ali was able to give Dr. Rollins his alibi. We also know that prior to going to sleep, Ali told Charlotte about her relationship with Dr. Rollins, which greatly upset her. Lastly, we saw that the violet roses in the DiLaurentis house were the very same color of the roses that Charlotte held in her hand when she was thrown from the bell tower. Could all of these things be a coincidence? I don't think so.

Charlotte finding out that her boyfriend was dating her own sister would obviously devastate her, and mean that Dr. Rollins owed her an explanation. Perhaps Dr. Rollins and Charlotte met up in the middle of the night and Dr. Rollins informed Charlotte that he was only with Ali to take over the shares of the Carissimi Group. Perhaps, in order to prove his love for Charlotte, Dr. Rollins proposed to her, and offered her a chance to marry him in the middle of the night at the church. Charlotte even took the flowers from the house for a "bouquet." It wouldn't be hard to sneak out of the house: Ali was asleep, after all.

So what happened at the bell tower? It's certainly plausible that Dr. Rollins tricked Charlotte in order to kill her and make sure no one could ever take the Carissimi Group away from him. It's also possible that someone got to Charlotte before Dr. Rollins had a chance to make good on his promise. No matter what happened that night, it's going to be a seriously crazy mystery that I can't wait to untangle.