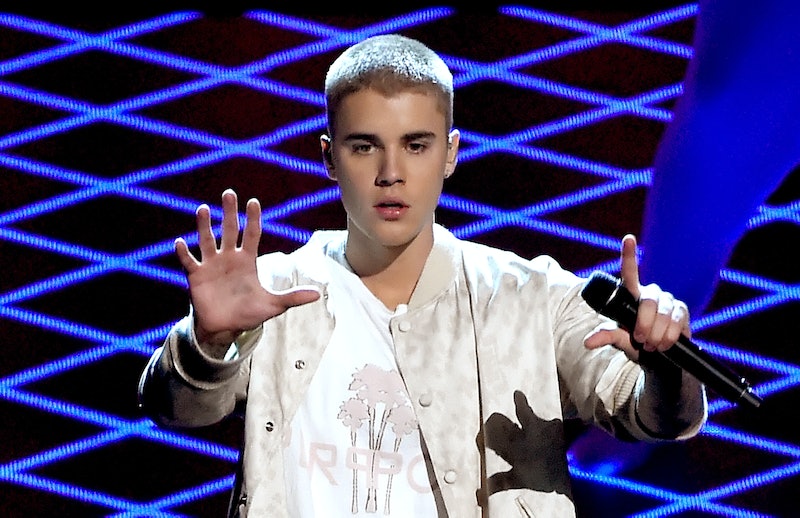 I'm fully aware of the irony of this, given the title, but an artist is alleging that Justin Bieber's song "Sorry" used a vocal loop of hers without permission. And while as of right now it's still just an allegation, you've got to hope that if there turns out to be some merit there, it isn't too late now to say sorry. 'Cause I'm craving more than your body — no you know what, that second part doesn't work here, let's just leave it at the first. The artist in question is White Hinterland, real name Casey Dienel, who claims that that little trill that begins the song "Sorry" was taken from her own song "Ring The Bell," and was used without licensing. It's that little ooh-ooh-ooh-ooh-ooh part that's become such a distinctive part of the song, and Dienel claims that she knew as soon as she heard "Sorry" that it had sampled "Ring The Bell." In a May 26 Facebook post detailing the suit, Dienel claims:

As many of you that follow my career and work have already recognized, Justin Bieber’s song “Sorry” copies the vocal riff prominently featured in my song “Ring the Bell.” The writers, producers, and performers of “Sorry” did not obtain a license for this exploitation of my work, nor did they obtain or seek my permission. Yesterday afternoon, I filed a lawsuit for copyright infringement against Justin Bieber and the other responsible parties.

Bustle reached out to a rep for Bieber regarding the claims, but did not hear back at the time of publication.

She explains that she tried to use other avenues in order to get the alleged use of the sample acknowledged, but that her efforts were in vain, and now she feels she has no choice but to take Bieber and his team to court. She continued with more claims:

Like most artists that sample music, Bieber could have licensed my song for use in “Sorry.” But he chose not to contact me. After the release of “Sorry,” my lawyers sent Bieber a letter regarding the infringement, but Bieber’s team again chose to ignore me. I offered Bieber’s team an opportunity to have a private dialogue about the infringement, but they refused to even acknowledge my claim, despite the obviousness of the sample.

Obviously this will be for a judge to decide — which is great news, as I'm far from an expert in this area — but I bet you're curious about how close these two songs sound, right? Again, it's just that little vocal riff right at the beginning, and White Hinterland's riff is three notes, while Bieber's is five:

People who are smarter than I am about all this stuff will be hashing it all out, but to my untrained ear, this comparison leaves me with a lot of questions. At the end of the day, I hope that if the allegations are true and if someone has been wronged, that it's not too late now to say sorry.