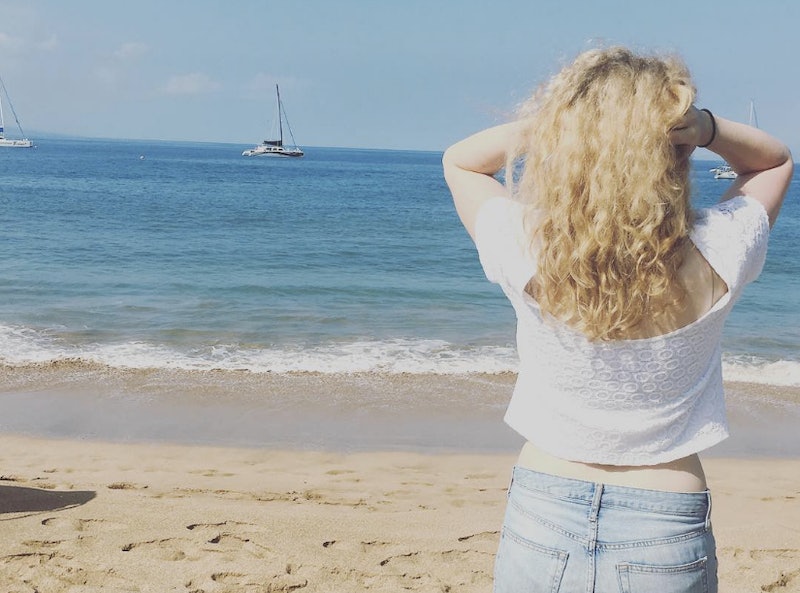 I fell in love for the first time when I was 18. We were dating at 19, and by then, I had our entire future mapped out. We would date for the duration of college, spend two years getting our careers off the ground, be engaged at 24, married at 25, and start having kids at 28. I declared all of these things with an arrogant kind of impatience — so long as I repeated it over and over again I could make it more concrete, I could get to it faster, and have the smug security of everything I thought I wanted. Like every other 20-something, I was swiftly realizing that my life was a giant question mark — the idea of a stable relationship seemed like the one thing I could control.

By the time we were 20, I didn't recognize myself anymore. I had always been a planner, but it wasn't until I was mapping out not just my own life, but somebody else's, that I realized just how problematic and unfair it was. For the first time, it was holding not just me, but both of us back. I broke up with him that autumn, and one of the very last things he said to me during the breakup only strengthened my resolve: "I thought I was done."

Not "I thought I would marry you," or "I pictured a life with you," but "I thought I was done." He didn't mean for it to sound unromantic or callous; it sounded the exact way I had been phrasing it for our entire relationship. It was the only way he knew how to say exactly what I had been pushing for all along.

I wish I could say I behaved well and that it was a clean break, but that would be a decidedly less accurate version of what actually happened. I panicked. I may have realized that all my planning and scheming was a problem, but it didn't make me any less dependent on it, and I waffled on my decision over and over and over again. Think about every cliché of what a textbook crazy ex is like, and there I was, the ultimate Millennial case study.

When I finally got over it and stopped disrupting his life and mine, I assumed that meant that I would meet somebody else; that that relationship was the messy stepping stone into other more mature, adult relationships. The truth is, my first big breakup was almost five years ago, and I haven't dated anybody since.

But what seemed like a nightmare to my 19-year-old self turned out to be a blessing that I could never have explained to her then. I am single because I have moved readily and often; I am single because, after a long time of searching for it, I found a career that I love; and most importantly, I'm single because I choose to be. I look back on the last five years and everything I utterly failed at, everything I accomplished, everything I fought for and took chances on, and even the opportunities I let pass by, and I am grateful that I wasn't attached to anyone during it. I am grateful that my decisions never impacted anyone else, and that they were my decisions to make alone. I am grateful because I know in my heart, if I were with someone, I would have chosen other things for myself. I wouldn't be where I am right now, and I wouldn't trade that for the world.

Of course, my 20-year-old self had to go through all that existential angst and doubt to get to this place; I wouldn't trade that, either. But if there were some way to reassure her through the time-space-Tinder continuum, these are the things I would have told my single self at 20 that I didn't know back then.

What you don't understand yet, past self, is that there is no time quite as tumultuous as the year you're about to graduate college — except the years immediately following it. It's only natural to try to gravitate toward something that seems constant, something that seems steady, and when there is no way in hell you'll find it in a job or a clearly defined sense of purpose or even a place you want to live, you think you have to find it with someone else.

The truth is, though, whether or not you're in a relationship in your 20s, you're screwed. You'll still have no idea what you want to do with your life. And when you do, you'll still be rejected a hundred times over. You'll still struggle to make enough to move out of your parents' place. And like clockwork, once a month you'll have a mini meltdown, once every six months you'll change your entire career trajectory, and once every year you'll consider moving to another city to ~reinvent~ yourself altogether. There is no escape from this. Forget love — this is the real tale as old as time. And it is amazing just how little you will fixate on your relationship status in the face of all the other seemingly impossible hurdles you have to conquer.

No Matter How Healthy A Relationship Is, It Will Hold You Back

In fact, a healthy relationship will always hold you back. Relationships are built on your ability to compromise and support each other. I'm not saying that there is anything inherently wrong with that, or that you should stay single to avoid it; it's just something you really need to consider in your early 20s, which are the most crucial time for setting a foundation for how you spend — or, more accurately, how you don't spend — the rest of your life. And oh, past me. There are plenty of terrible jobs and crappy apartments and regrettable haircuts you need to experience before you even get close to figuring that out for yourself. Trust me.

Oh, past me. You awkward, stubborn, ridiculous, sweet summer child. We've all heard that Yiddish phrase, "Man plans, God laughs," but for some reason, it will take you a lot longer to absorb this when it comes to relationships. Maybe it's because everything else that happens to us seems so much more external and out of our control that, comparatively, something as personal and intimate as a relationship feels like it should be easier. Spoiler alert: It's not.

But in your case, past me, the truth was you made all those plans because you had no idea what you really wanted yet; only when you finally learned to let them go did you open yourself to all of the other possibilities. And only then understand that those possibilities were so vast that there is really no way to plan around them at all. So no, you won't be married by this age, or have kids by that age. But you will eventually learn to relax, and if not, trust the universe to let things happen when they happen, at least have a little faith in it. You will learn to stop squinting at road maps, and start enjoying the ride.

It's OK To Feel Lonely Sometimes

Past me, you will enjoy being single. You will seize so many opportunities guiltlessly and wholeheartedly, knowing that your decisions don't affect anyone but you. You will love coming home at night to peace and quiet, and having time to write and read and take care of yourself. You will love not worrying about merging your world with somebody else's every time you introduce your S.O. to a new group of friends, to your family, to some part of yourself. You will love it so much that you'll eventually write a ridiculous number of articles about it.

But I'll level with you, past me — sometimes it will also suck. Not very often, but sometimes. And you'll wonder if it makes you any less of a strong person or somehow less of a feminist to admit it, even though you know it doesn't. And you'll wonder if you had your priorities mixed up or if there is something wrong with you, even though you know you like yourself just the way you are. But eventually you'll realize that this is just one among one million things you'll second guess yourself on, not the one thing that makes or breaks you. Eventually, you'll realize there's no shame in being lonely sometimes. And weirdly, by letting yourself acknowledge and appreciate those times when you feel lonely, you'll get to know yourself better than you ever would have otherwise.

You Have To Run Your Own Race

My mom has said this to me probably 100 times in the last five years, but every time I hear it, it means something different. I think that's kind of the point, though — whatever view you're running toward is constantly changing, the same way your goals and your desires will constantly change. Those years between 20 and 25 will make you unrecognizable, past me. (OK, you'll still dress like a kindergartner, but emotionally unrecognizable.) The things you are jealous and comparing yourself with other people over at 20 will not be the same things you are jealous and comparing yourself with other people over in any of the years that follow — so really, there's no point in wasting your energy feeling that way in the first place. People are going to pass you. You're going to pass other people. Set your own pace, and most importantly — enjoy the view.