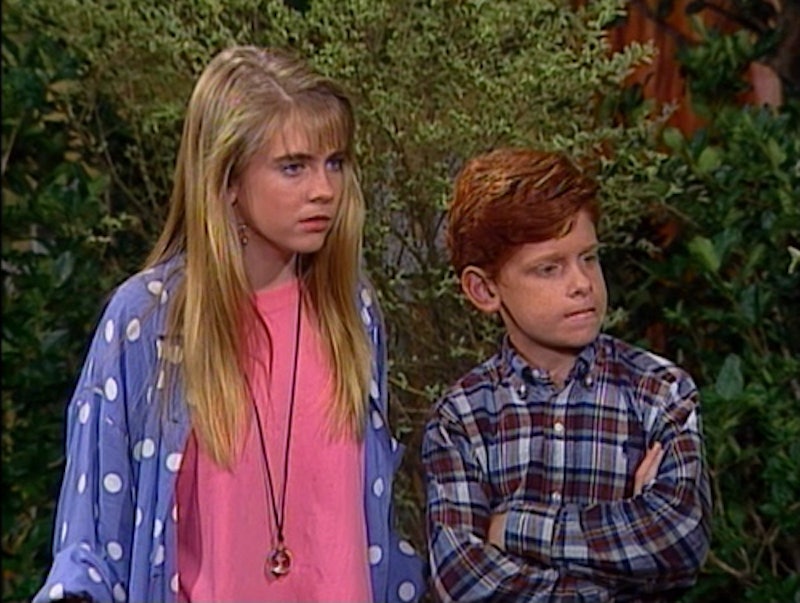 In the benevolent world of Clarissa Explains It All , there was no clear villain. Clarissa might have been an American fourteen year old, but she seemed worlds away from the typical teen school experience of bitchy/popular girl endurers like Veronica Sawyer (Heathers) or Cady Heron (Mean Girls). What viewers got for a villain instead, was someone a little less malevolent, a little less obviously hateable: Clarissa's little brother, Ferguson Darling. However, allow me to blow your mind with my own opinion, which is that Ferguson from Clarissa Explains It All was a good guy. Hell, he was even one of the best characters on the show.

We know we're meant to dislike Ferguson because Clarissa does. The first giveaway? Her rich array of dismissive nicknames for him, from Ferg-face to Ferg-breath to dimplebrain/ peabrain. Another clue is found in Ferguson's isolation. While Ferguson doesn't seem to have any friends, he's never invited to tag along with Clarissa and her best friend Sam.

Sure, Ferguson's not exactly a dream brother. He tends to plot to take advantage of Clarissa, or to make money, and he's a shameless brown-noser. But, still, TV history hasn't been kind to Ferguson. How would you have felt having a sister as sunny, hip, and universally beloved as Clarissa Darling, anyways? Probably not great — especially as, you'd assume, the only 12-year-old Young Republican in your neighborhood and one with a grand total of zero friends.

Our first impression of Ferguson isn't ideal: in Season 1, Episode 1, "Clarissa's Revenge," he takes her bra to school. But even this suggests a certain desperation: in order to curry favor with the other kids, he's reduced to stealing his sister's underwear. Not a proud moment, surely?

And for every time Ferguson tries to get one over on Clarissa, there's probably a corresponding trick Clarissa has played on Ferg. In Season 2, Episode 15 "She Drives Me Crazy," Sam reminds Clarissa of the time she sent a photo of him to actress/activist Sally Struthers to inspire her to gift Ferguson to "some third world family" (I dunno, '90s TV) "or the time you turned him into America's most wanted."

Later in the same episode, when Clarissa tries to win Ferguson's affections via a present, Ferguson recoils without opening it. When Clarissa asks why he won't accept a gift from her, he counts off the last few times she gave him a gift: the one time it exploded in his face, the other time when her Christmas present was just a box full of snakes... no wonder Ferguson's got such a troubled dynamic with his sister.

And it's not just his sister who tortures him. In Season 1, Episode 8, "Bully," we find out that Ferguson has his own personal school bully, Clifford, who steals his game boy, sneakers, stamp collection, chess set, remote control car, and his favorite baseball cap — potentially further evidence that Ferguson's unpopular at school. Perhaps the most telling part of the saga is that it's his sister, not his parents, who pick up on this first (mainly because the bully also stole Clarissa's walkman when Ferg borrowed it). Presumably, even though Ferguson and his parents have a more positive relationship than he and Clarissa do, they're still not really engaged enough in his life to notice their son being bullied at school.

So next time you're watching an episode of Clarissa Explains It All, spare a thought for the unsung victim of the Darling household. Sure, Ferguson's obnoxious, abrasive, and self-interested, but wouldn't you be, if the only person looking out for you was you?