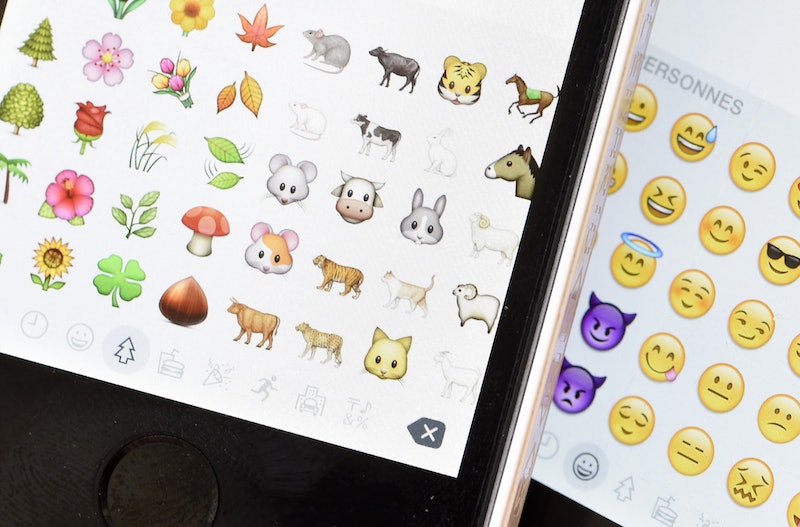 The religious text you didn't know you'd been waiting for is slated to make its iBooks debut on Sunday, May 29. Bible Emoji: Scripture 4 Millenials [sic] is a King James Version of the Christian Bible with a twist: the verses have been translated into text talk and emoji. (And 😇 saw that it was 👍.)

Having grown up in the Bible Belt, believe me, I can hear the outrage pouring in. In an interview with The Memo, Bible Emoji creator 😎 — no, really, that's the only name we have: 😎 — says they have "received a lot of tweets, some very nice some very, not nice," since debuting the project.

After toying around with the Bible Emoji idea, 😎 designed and launched their Bible Emoji Translator. A user can type in her favorite Bible verse — say, one that's longer than Twitter's 140 character limit — and the shortened emoji translation appears. Since 😎's webtool works with any quote, I gave it a try with this passage from Hamlet's soliloquy:

To die, to sleep —To sleep — perchance to dream: ay, there's the rub,For in that sleep of death what dreams may comeWhen we have shuffled off this mortal coil,Must give us pause.

Bible Emoji's release comes hot on the heels of Dan Brown's announcement that he's to abridge his bestselling novel, The Da Vinci Code , for young adult readers. It's difficult to see how 😎's book can avoid sparking similar controversy and outrage from Millennials who can read the KJV just fine, thank you very much.

Normally, I'd be right there with them, incensed at the condescension. Except that Bible Emoji doesn't seem particularly serious about its goals. 😎 says that the Internet backlash is "all worth the goal of making the Bible a little more approachable, to inject some levity, and to get people to look at it, with no particular agenda beyond that." In fact, the whole endeavor reads less like a preaching tool and more like a fun way to play with our evolving language.

Let me know what you think of Bible Emoji by starting a conversation on Twitter. Download a copy to your Apple device on May 29.