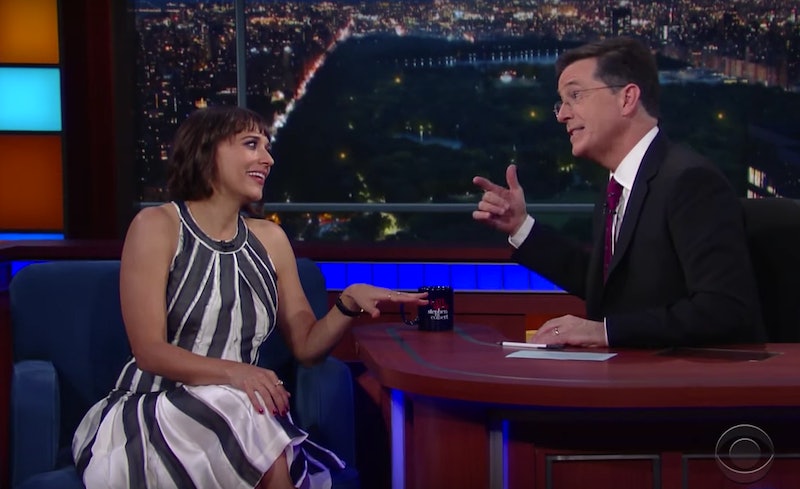 Rashida Jones: actress, writer, producer, and outspoken feminist. Friday evening on The Late Show with Stephen Colbert, Jones shared her important perspectives on what it means to identify as a modern-day feminist, helping an eager-to-learn, self-professed feminist himself — Stephen Colbert — understand how to be an advocate for woman everywhere. That's right, Jones taught Colbert how to be a feminist.

"Do you know what to do to be a feminist?" Jones asked Colbert, who shook his head and asked, "Is there something I should be doing?" Jones answered kindly during the interview, “Well, you just have to stay educated and stay sensitive [...] And I think you have to know what we [women] go through." The two then did a role reversal scenario, wherein Jones asked Colbert questions that typically get asked to woman in the Hollywood sphere — such as, "Who are you wearing?"; "What's your beauty regimen?"; and, "With three kids at home, how do you do it all?" Colbert answered the last one candidly, "Oh, easy. I don't."

Recently, Colbert discussed the lack of female emojis, and put Hollywood on blast for not including more female villains. The late-night talk show host makes an effort to be aware of gender inequality, and seeking instruction from Jones is just another way for him to gain some insight. The actress even incorporated intersectional feminism into their discussion. To quote Leslie Knope — the BFF of Rashida Jones' Parks and Recreation character Ann Perkins — Rashida, you poetic, noble land-mermaid. Check out the exchange below.

Jones tells Colbert to "be proud to be a feminist." If we're following the actress' ways, not only that, be proud to join in on the conversations — even the uncomfortable ones. Even if you are a male late-night talk show host who never gets asked superfluous beauty regimen questions, we all have things to learn from each other.