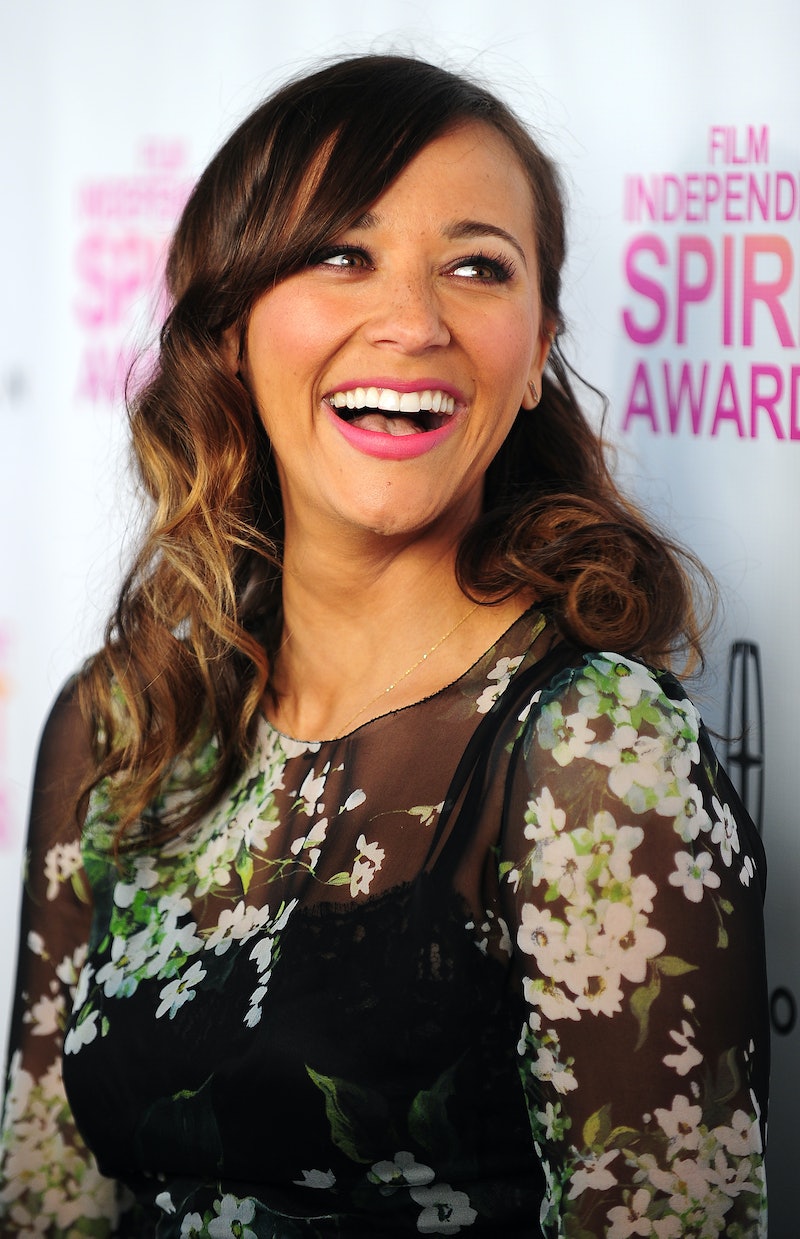 Seeing as one of the most beloved TV comedies ended Tuesday night (yes, I'm referring to the series finale of Parks and Recreation ), I think it only makes sense that we honor one of the show's stars, Rashida Jones. Plus, Feb. 25 is Jones' birthday, so, yeah, that's another reason to dedicate an entire article to the talented actress, writer, and producer. Not only will she always be remembered for being half of Leslie Knope and Ann Perkins, (one of the best friendships to ever exist on television), but Jones' support for feminism will always be remembered.

What better way to honor Jones, her birthday, and her empowering ways than by showcasing some of her top feminist quotes? On more than one occasion, Jones has expressed her views on women. Whether she's talking about women in Hollywood, the portrayal of women, and women's intelligence, the Angie Tribeca actress has proven she is a great role model for females of all ages. There's no doubt that Jones is an inspiration and will continue to be one if she continues to express her views about the world, especially when it comes to women.

With that said, here are seven feminist quotes from Jones that will surely make you feel like you can take on the world with a smile.

"It’s like every woman in a movie has to be perfectly adorable, and her life is a mess… and only when a man comes in does everything really fall into place. I think the more iterations of a woman that exist, the better. Even if they’re bad, if they’re good, if it’s ugly, if it’s messy — it just is better for everyone to see all of it."

Who else agrees with Jones that we need to start seeing more "real" women and female characters who can make it on their own in film and on television?

"Why are we so obsessed with socialites and girls who are amateur sex-tape stars? Can we also be obsessed with women who have changed the world and are really, really smart?"

Amen, Jones. Intelligent women need to be of the focus, which Jones is helping to change through her words and career.

"I would, yes. I believe in the unadulterated advancement of women. And we have so far to go still. I do think because women are so clever and flexible and such good communicators, it been hard for men to evolve and keep up. I think we could do a little better to help them out."

Jones' response on whether she is a feminist is smart, spot-on, and, of course, said with a sense of humor.

"I realized I was in this small space with all these super-talented women vying for one part in one movie, and it was always the sh---y part in that year's one good movie: someone's wife, or someone's shrew girlfriend. So that has definitely played a part in my decision to act a little less and create a little more, because I want to add more to that conversation about what it takes to be a woman."

And now I will go watch everything Jones has ever been in or helped create.

"I'm not gonna lie. The fact that I was accused of 'slut-shaming,' being anti-woman, and judging women's sex lives crushed me. I consider myself a feminist. I would never point a finger at a woman for her actual sexual behavior, and I think all women have the right to express their desires. But I will look at women with influence — millionaire women who use their 'sexiness' to make money — and ask some questions. There is a difference, a key one, between 'shaming' and 'holding someone accountable.'"

Jones wrote a column for Glamour magazine responding to that infamous tweet of hers, where she wrote "#stopactinglikewhores," and, of course, her response opened eyes and got a lot of attention.

“You can’t invest in your looks as your only thing because it’s a depreciating asset. It’s like putting money into a stock that’s going down. Invest in your brain, invest in your talents. Those things can appreciate and they get better as you get older."

As Jones says, your brains and your talent are beautiful, meaningful qualities and something we all should embrace and put to use.

"I mention in my article that men need to be a part of this conversation because what's ended up happening is it's a bunch of women just, like, duking it out between each other and we're not including men."

See? Jones is a true feminist.