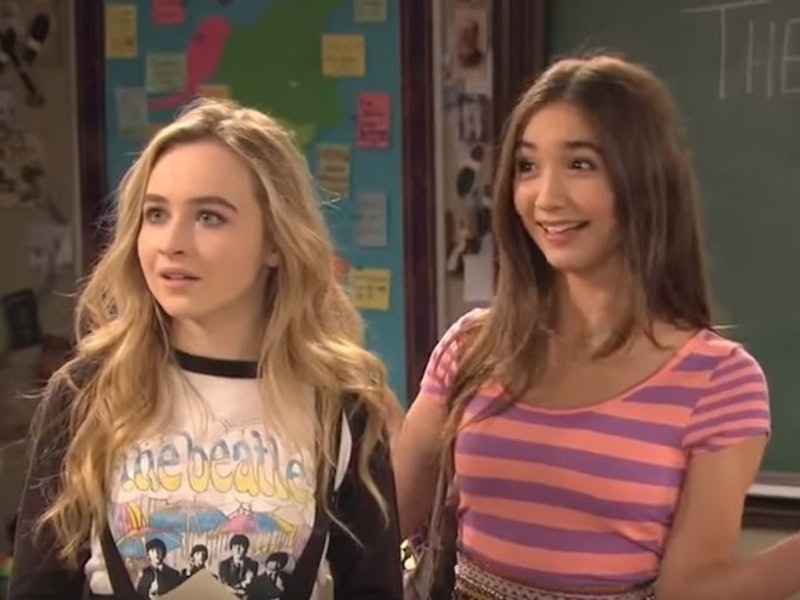 There is trouble brewing in the bay window. Ben Savage recently shared a photo of an all too familiar Boy Meets World location on his Twitter feed, and it can mean nothing good for Riley and Maya. Brace yourselves, guys because Girl Meets World is heading to Mount Sun Lodge in Season 3. You remember Mount Sun Lodge; it is the place where dreams go to die and hearts are instantly shattered. In Boy Meets World Season 5, a visit to the lodge led Cory to share a kiss with Lauren (played by Linda Cardellini) and that kiss, plus a love letter, broke up Cory and Topanga. It was horrible, and now Riley and friends are heading to the ski lodge of pain just as they are busy dealing with all kinds of complicated romantic feelings.

With the Maya, Lucas, and Riley triangle still unresolved and Smackle and Farkle's young love in its early phases, the trip to Mount Sun Lodge could lead to all kinds of messy revelations. There is no way Girl Meets World would choose such an iconic Boy Meets World location for a getaway if the show was not planning some major developments to go down there. Now that Riley and her friends are in high school, the show is in a position to tackle more complex emotions, and most likely leave fans crying over said emotions.

The big question now is which Girl Meets World couple will have their world rocked at the lodge, and what will it mean for the rest of the group?

From the very first episode, the show appeared to be setting up Riley and Lucas... then things got complicated. Now that Maya has also admitted to having feelings for Lucas, the three characters are trapped in a love triangle where a move in any direction will mean hurting someone they love. There's nothing like a stay at a cozy ski lodge to lead to romantic confessions, and if Riley and Lucas end up confessing their feelings, things are going to get awkward between Riley and Maya, and Maya and Lucas, fast.

On the other side of the coin are Maya and Lucas. When Riley first realized her best friend and her crush had feelings for each other, she tried to be noble and step aside. I suspect if Maya and Lucas actually get together, Riley might react differently this time. The perpetually happy Riley might actually get angry — probably not at her friends, but at the world in general. A few episodes of Riley acting out would be interesting to watch, especially if it ended with one of the show's classic Maya-and-Riley-bonding moments.

If the show wants to make things really messy, then a kiss between Riley and Farkle is the way to do it. Not only would it be confusing for Riley and Farkle, who have always been friends, it would also mean Farkle and Riley would be betraying Farkle's girlfriend, Smackle (who is joining the gang in high school). Then there is the Lucas of it all. Lucas has feelings for Riley, and Farkle is his best friend. A kiss between this duo could lead to major collateral damage within the group.

An Established Character And Someone New

Hey, Lauren was a totally new character who showed up just long enough to wreak havoc before disappearing again. Never underestimate the power of an interloper. A stranger at the lodge could lead to discord in any one of the show's pairings and leave these teens even more confused about their feelings than they were before.

The only thing I know for certain is that skiing is definitely not going to be the highlight of Girl Meets World's trip to the Mount Sun Lodge.