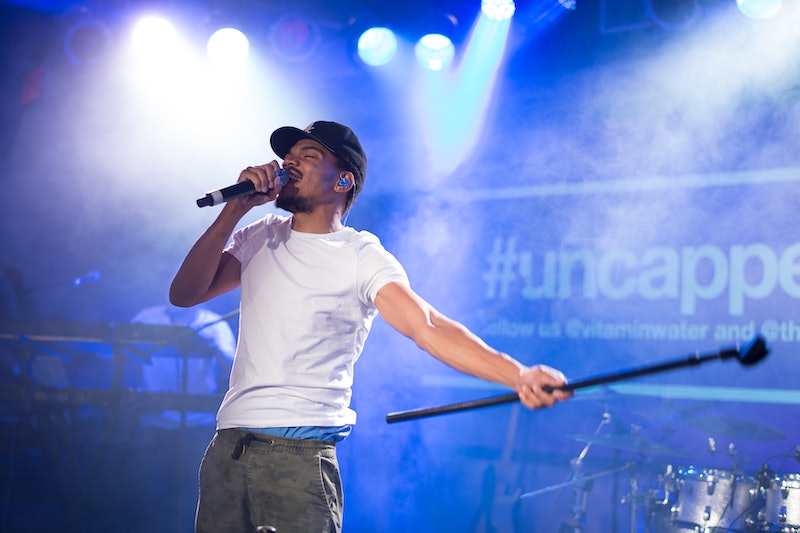 Although Chance the Rapper certainly wasn't the first musical artist ever to release his music via streaming service, he is the first do mark this impressive milestone. The rapper's album, Coloring Book, which was streamed exclusively on Apple Music, has become the first to debut on the Billboard 200 due entirely to streams, according to Billboard. On May 22, the album made it to #8 on the chart after garnering roughly 38,000 equivalent album units (on its website, Billboard defined 1500 album streams as equaling one traditional unit). This is clearly big news for Chance — but what does it mean for other artists dropping releases on streaming sites going forward?

As said, Chance isn't the first artist to use streaming as a form of album release. Kanye West did it with Life of Pablo, for instance, which originally found itself exclusively on Tidal; Rihanna did it with Anti; Drake with Views; and Beyonce with Lemonade. But Chance is the only artist so far to have a streaming-only album make the Billboard 200 chart, and that impressive feat might convince other artists to follow suit by releasing their albums solely on streaming platforms, too.

The streaming-only model clearly worked well for Chance, but would it have been as wise for an artist less well-known? One has to wonder if choosing to only release an album through streaming would prove as successful for artists for whom "exclusive" isn't as thrilling to audiences. Yet even though he's popular, Chance is still relatively under-the-radar as far as successful artists go, and so his triumphs in streaming could potentially influence what other artists do later on.

Perhaps this new technique won't make most artists too much money — The Guardian reports that the average unsigned artist makes only 69 cents per streaming song — but if Chance's success is to judge, it could very likely get them a lot of attention. Chance has gotten a lot of publicity for choosing to release his album in this way, and while it's not clear yet how successful his "real" album release on May 27 will be, with so much success from streaming, it's unlikely that his "regular" release won't do well, too. Sure, some fans might feel they don't need to buy the album if they can simply find it streaming online, but then there's those who, having grown to love the album after listening to it over and over again via the streaming exclusive, decide they simply have to own it.

In an industry that has been struggling to find its footing since the internet made it so easy to illegally download music, any changes to how much is distributed are welcome. Experimentation to figure out the proper way to handle album sales is key, and it's refreshing that a relatively new artist is the one leading the charge. Only time will tell which underground artists choose to follow Chance on this unusual path.