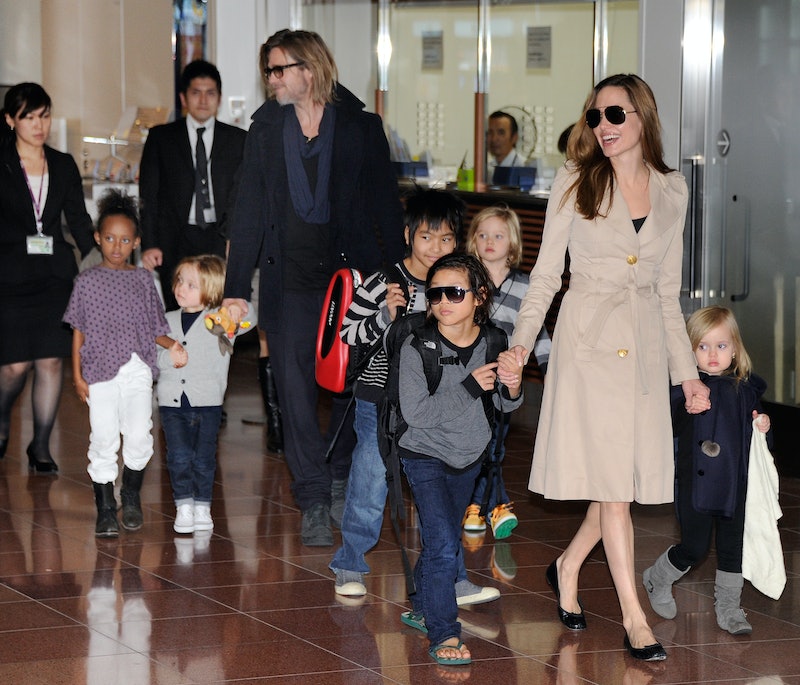 I'm still not sure if I want kids, but I know that if I do have them, I would seriously consider adopting. That said, like most people, I don't actually know many people who've adopted, so I don't know much about what it actually takes to approach motherhood in this way. Most of my ideas about adoption are based on what Hollywood likes to show us; the atoning birth parents who fight to reunite with their long-lost child, or the distraught mom who tries everything she can to conceive before she decides adopt (think Charlotte from Sex and the City).

Real-life adoption rarely looks like that, though. Mark T. McDermott, an adoption attorney in Washington, D.C., told Adoptive Families, "People watch TV and read the newspapers, and they are scared to death." We've been convinced that adoption is difficult to execute, wildly expensive, and riddled with emotional despair. But McDermott insists that these disasters rarely take place, and that the process of adoption has actually become easier over the years.

Although U.S. adoption rates are still pretty high, they're actually lower now than they were in the 1970s. In the mid-seventies, 49,000 American children were placed for adoption, compared to the 18,078 in 2007. This is partly due to the decrease in stigma around single parenthood, as well as more accessibility to technological advances such as In Vitro Fertilization (IVF). The good news, though, is that parents who adopt today have a lot more options and resources than ever before, and there is less taboo around adoption.

Bustle spoke with Stacie Morgan, a mother of five, who has two biological daughters and three sons adopted from China. She and her husband live in Richmond Hill, GA with their kids, and she says adopting has been nothing but a tremendous, rewarding experience for her family. "For our first adoption, our reason was that we wanted to add to our family," she says. But there was more to it when it came to her second and third adoptions. "We now knew the huge need for waiting children in foreign countries with special needs," she shares. Morgan says that even if she had the option to have more children biologically, she would only continue to adopt.

You might think adoption isn't an option for you — that you would "have" to have your own kids. I'd say you should examine that assumption more closely. Here are six reasons to consider adoption an option for your future.

1. Overpopulation Is A Pressing Environmental Issue

There are way too many people walking the face of the earth, as we speak. Seven billion, to be exact, and we're having trouble distributing resources to everyone as it is. Part of the problem is that the richest countries in the world consume double the resources as the rest of the planet, and experts predict that, by the time we reach the 2030s, there won't be enough resources on planet Earth to sustain us all.

Instead of adding to this problem, if more of us adopted, it would make a huge difference. Countries like China and India are so overpopulated that millions of people, including children, are fighting to have access to basic resources, such as water and food. If we all adopted instead of adding more people, we actually might end up leaving more resources for the next generation, ultimately giving our children — and everyone's children — a better world to live in.

2. There Are Millions Of Children Out There Who Are Essentially Homeless

There are 153 million orphans around the world who need to be adopted. Almost 18 million of them are either living in an orphanage or are homeless. In the U.S. alone, there are 423,733 kids who are carted around from one foster home to the next, never able to call a single place home. So many of these children come from households of abuse, countries that are in the midst of civil war, and families that simply don't have the means to look after them. Each one of them deserves the chance to live out a happy life, and you could help make that happen.

3. You Won't Have To Worry About Your Biological Clock

We only have so many eggs in our body that can mature in our ovaries, get fertilized by sperm, and result in a baby, a fact that inevitably puts some pressure on us to get the job done by a certain age, before it gets to be too difficult. Without even meaning to, our friends and family add to the stress by asking the sneaky questions, like, "So when are you going to start thinking about kids?" Add all the fertility myths into the mix that we picked up along the way, and it's no surprise the whole pregnancy thing leaves you anxious as early as your 20s. It turns into a mental battle of when you're actually ready for a child — and when your body is able to produce a child.

Adoption takes away all that tension, though. You can choose how long you want to wait for kids, without even worrying about what your fertility has to say on the matter. After all, you have to take care of yourself first and foremost if you're ever going to raise a healthy kid — imagine how liberating it would be not to worry about whether you'll be ready "in time."

4. You Could Give A Child The Chance To Receive An Education

Research shows that American foster kids have a lot of trouble finishing high school because of the instability they experience at home, and they're very unlikely to attend college or graduate school. Having a stable family who cares about their education makes all the difference.

Similarly, overseas in developing countries, there are thousands of children who live in underserved communities and don't receive proper education. Maybe there aren't enough teachers in the area, or they're simply not allowed to go to school. Whatever the case may be, a lot of children suffer greatly from this lack of education. According to the United Nations Organization for Education, Science, and Culture (UNESCO), 20 percent of youth in developing countries don't even finish primary school. Consequently, they have trouble surviving in the world once they become adults.

Whether you choose to adopt domestically or internationally, you'll open doors for education and lifelong learning that they wouldn't have had access to before. "Seeing our kids make even the smallest strides is amazing," Morgan beams.

5. Adoption Is Not As Difficult Of A Process As You Might Think

By no means am I saying that it's easy, but there are so many resources at your fingertips to help make adoption a reality for you. Today, there are countless nonprofit organizations and established communities that are dedicated to providing information and support to families who want to adopt. Morgan says adopting has "brought us into a community that is the most supportive I've ever been in." As far as the cost, it probably isn't as expensive as you might think, especially if you choose to adopt domestically. You don't have to have all the money ready upfront, either. Families apply for grants or put on fundraisers. You can even apply for a federal tax credit.

Above all, Morgan recommends that you are 100 percent committed to adopting before you get started with the process. "Educate yourself. Get all the resources you can. Surround yourself with parents who have walked through adoption and can be a support system," she says.

6. Your Heart Is Probably Much Bigger Than You Think

People might worry that they could never adopt because they wouldn't love their kid the same way. Talk to any adoptive parents, however, and they'll tell you that's an unfounded fear. "Don't think for a second that my children who are adopted are not my own," Morgan tells Bustle.

If you're sad about missing out on certain experiences, know that these days, it's even possible to bond with your adopted child by breastfeeding. There are all sort of ways to induce lactation, such as taking certain herbs, trying medications from lactation specialists, or even listening to a recording of a baby crying while you hold yours.

Of course, adopting isn't all rainbows and puppies. Like every parent, you'll probably need all the support you can get. But imagine how you'll feel knowing at the end of your life that you absolutely, positively made all the difference in someone's future? If you adopt, it's almost like knowing for sure that no matter how imperfect a parent you are, you didn't go through all that trouble for nothing. It's pretty much the most important thing you could ever do for another person — so instead of assuming you "never" could adopt, why not at least consider it a serious option? Your capacity to love is, I would hope, much greater than you think.

More like this
UK Black Pride 2022 Just Broke A Major Record
By Sam Ramsden
Charlene White & MPs Lead Tributes For Bristol Bus Boycott Organiser Roy Hackett
By Sam Ramsden
The Best Time To Date After A Breakup, According To Experts
By Bustle Editors
Ben & Jerry’s & Tony’s Chocolonely Are Launching 4 Responsible New Flavours
By Sophie McEvoy
Get Even More From Bustle — Sign Up For The Newsletter