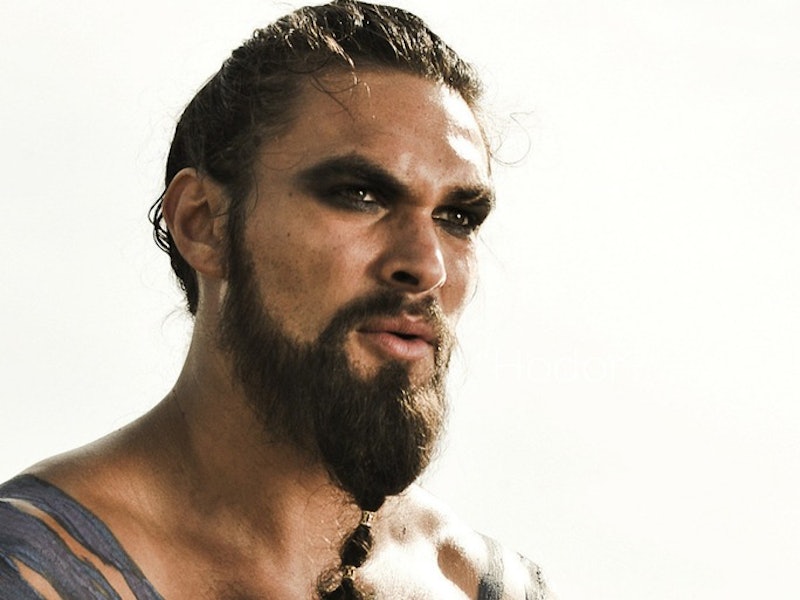 If you've been keeping up with Season 6 of Game of Thrones, you'll know there's been some Khal Drogo rumors getting stirred up. Jason Momoa has been anything but coy when it comes to voicing his love for his TV wife, Daenerys Targaryen, this season. Instagrams have been popping up all over the place of Momoa wholeheartedly enjoying Daenerys' "take no prisoners" attitude. I'll be honest: all this love is pretty stinkin' adorable. Daenerys and Drogo were arguably one of the cutest couples in the kingdom during Season 1. Sure, they were polar opposites at first. He was rough around the edges, she was a bit sheltered. He tried to take what he wanted by force, she tried to get what she wanted with words. But those differences quickly melted and what was left was a very strong and functional union. So, when Drogo died of an infected wound (c'mon, George R.R. Martin! Really?) to say it was a gut-wrenching loss is a bit of an understatement.

Amidst all this recent buzz out of Camp Momoa, I've started wondering what would actually happen if Drogo did return to Game of Thrones. It would certainly be an earth-shattering rise from beyond the grave. We know that it's possible for the dead to come back to life, but without Melisandre close by are there other ways for the dead to come back to life? While we may not know the answer to that particular question, what we do know that Momoa's possibly *major* Instagram posts could herald a return. What are Drogo's options post-resurrection?

He Will Put Daario In His Place

Don't get it twisted: Drogo isn't about to let another man fawn all over Dany. With Jorah off on a quest to fix his ailment, Daario is one of the only guys who still dares to secretly crush on Madam Stormborn. We see those sneaky looks, Daario. If Drogo did come back, Daario will have to take several seats. Drogo is really the only man for Daenerys and he wouldn't let any one forget it. There might be a big duel or maybe a low-key sit-down to assert dominance; either way, Drogo would not sit idly by.

He Will Help Daenerys Conquer Westeros

You think Drogo is just gonna chill and drink wine all day? No way, dude! He's going to fuel up with a Luna bar or two and then help Daenerys storm King's Landing and get her on the Iron Throne. Daenerys is dead set on taking back what is rightfully hers in Season 6. Drogo would ostensibly support her no matter what, especially once he sees the influence and power she has garnered in his absence.

He May Earn A God-like Status

There's a very real chance that, no matter what achievements Drogo goes on to garner in his second life, he will become revered by the Dothraki. They have shown, as a people, to be readily in awe of those who defy nature. Drogo's resurrection would certainly fall into that category. The Dothraki will certainly be even more inclined to help the Khaleesi and her beloved rise up if they believe they are serving a god. Drogo as a god, in combination with Dany's fire-taming skills, would help make them serious #CoupleGoals.

He Will Let Daenerys Do Her Thing

Just because her moon and stars has returned doesn't mean Daenerys will let Drogo automatically take the front seat. I like to think that Drogo wouldn't try to assume the leadership role to begin with. Once he's properly recuperated and back on his feet after what would surely be a mythical resurrection, you can bet your boots Drogo will happily stand by his lady and let her lead the way. After spending so much time in Season 1 getting closer than close, Drogo will become a support system/extra muscle while Daenerys works her way back to King's Landing.

He May Take A New Form Altogether

What if Drogo returns not in human form, but in the form of a dragon or a horse? As a Dothraki, to be either of these creatures would allow Drogo to get the proper reverence from his people while still staying connected to Daenerys. We have yet to have another example of reincarnation into a different form on the show, but stranger things have happened on this show.

Whether any of these options are possible or something entirely new is up the sleeves of the screenwriters of Game of Thrones, one this is for certain: we need Khal Drogo back in our lives immediately. Is it too late to start a Kickstarter to get him resurrected?