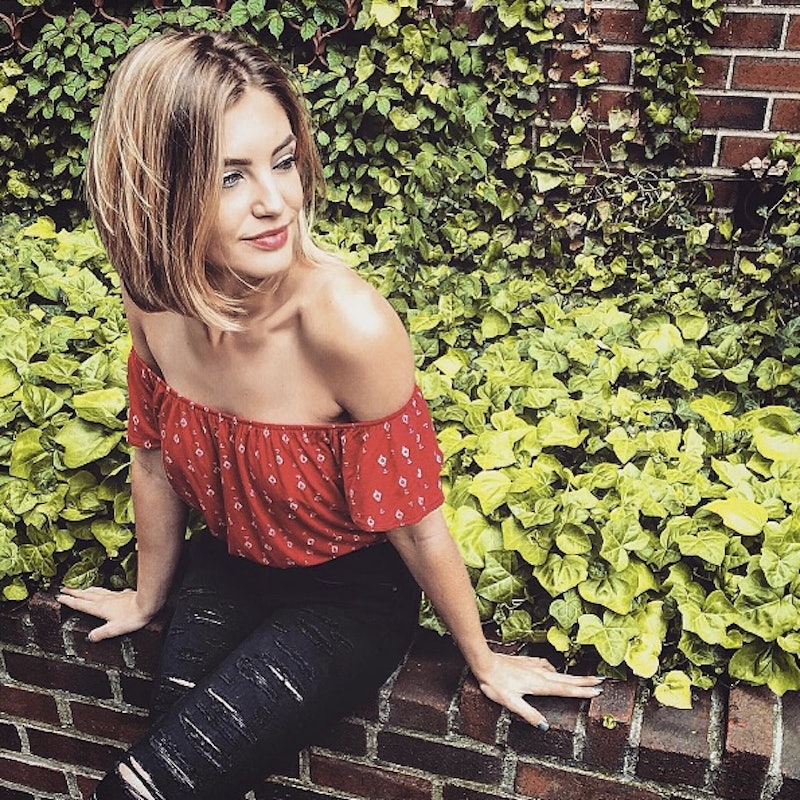 Viewers watching JoJo Fletcher's season of The Bachelorette see Chad as the villain, and one of his big problems is that he seems to have forgotten what he signed up for. As I know all too well, when you become a contestant to find love on reality television, you pretty much agree to cheesy, ridiculous pick-up lines, over-the-top dates, making an absolute fool of yourself, and feeling strongly about someone after a two-minute conversation. Basically, you contemplate marrying someone you just met. But, Chad took issue with this on Monday's episode and wasn't afraid to tell JoJo that. And, I do agree with one thing Chad said on The Bachelorette : None of these guys really know JoJo yet.

Take the ESPN group date in Episode 2, which included a football endzone celebration dance, spinning around on a baseball bat, and proposing to JoJo with a giant, obviously fake engagement ring. Each guy asked JoJo to marry him in their own special way, pointing out everything they love about their Bachelorette, giggling with a smile on their faces because, well, it's not something you can take seriously. JoJo wasn't taking it completely seriously, either. And, they shouldn't. For example, think back to Mexico City during Ben Higgins' Bachelor season, when I was on a group date in Spanish class and he proposed to several of us, confessing his love. All of us knew it was goofy and awkward, but both Ben and the women were having fun and making light of the situation.

Back to JoJo's group date — Chad wasn't having any fun. He refused to point out the things he loved about JoJo, and called her "naggy" when she pressured him to try to get involved in the group date activity. He basically said the guys were being fake, acting like they were "super into JoJo" when they didn't even know her that well. In a later portion of the date, he put the guys on blast (and JoJo, really) and said he didn't know her well enough to say all the things he loves about her.

Harsh, right? He went on to say to the guys, "Y'all don't know her yet ... You can't be in love with her and if you are that's weird." He looked at JoJo and said, "I can't right now, as far as we've gone, say I want to marry you. I can't say you're the greatest girl I've ever met." Again, harsh. Or was it? As you can see in my Facebook Live video with Bustle, Chad's honesty on Monday is one of his pros.

Let me put this into perspective for you. By the time of the ESPN date, the guys have only known JoJo for two or three days tops. They've probably had a few short conversations with her, and they've seen her walk into the mansion to pick up guys for other dates. They've sat at a special spot on the couch as she walks into the living room, hoping that they'll make eye contact with her. Heck, they're on a date with several other guys — and I can guarantee you, as the "group date queen" of Ben's season — that doesn't amount to ample one-on-one time.

So here are several guys saying, "JoJo, I love you. JoJo, please be my wife. JoJo, this is the happiest day of my life." They're doing so after knowing JoJo for a few short hours. Therefore, Chad does have a point. None of these guys know everything about JoJo, and they most certainly don't love her yet. But, the point is that they're having fun and enjoying the process for what it is: An awkward, over-the-top date.

Was it refreshing to hear a contestant say what Chad did? Absolutely. Did it make sense? Absolutely. It makes sense to say that you couldn't possibly point out all the qualities that you love about your girlfriend of a few days who is also dating several other people simultaneously. Even JoJo said she appreciated his honesty, and Chad chalked up his comments to the fact that he's "not an actor" and he's calling it like it is. Is he wrong to say what he thinks? No. But, was his delivery correct? No.

I will stand up for Chad and say that I wholeheartedly agree with his thought, and I even wish I could have seen the experience his way at times when I was on Ben's season. Heck, I got caught up with eye contact and feelings and thinking I could marry someone after a two-minute conversation. You're thrust into a situation where you're primarily focused on the lead, and you paint them as marriage material in your mind without knowing everything about them.

Where Chad went wrong, and the differentiation he needs to make, is the fine line between being honest and being brutal. I'm a big believer that honesty is the best policy, but I don't agree with going out of your way to offend "in the name of honesty." You can't justify mean comments or harsh behavior by saying you're being straightforward and real. There are so many ways to explain your feelings without offending others. To me, honesty opens doors to communication, while rudeness slams doors shut and stems from emotions. Chad wasn't trying to connect with JoJo and communicate his feelings about the date, he just released a brutal truth bomb that focused solely on his needs only with the intention of inflicting pain.

If there's one thing that I learned on the show, it's to not take the whole experience so seriously. James Taylor wrote goofy songs about JoJo to pass the time in the mansion, and he's still there to (hopefully) fall in love. Alex proposed to JoJo on the ESPN group date and said all the things he loves about her, and guess what, he wants to fall in love with her too. They're being honest and real and enjoying the process for what it is. The most important thing on The Bachelorette, as I've learned, is to enjoy the moment — and Chad could take a lot more away from the entire experience by embracing the awkwardness.