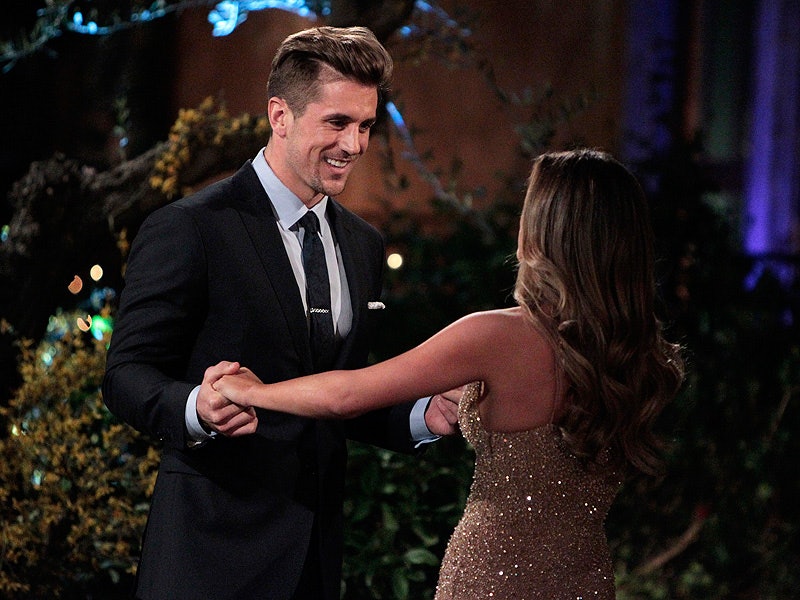 Not that he would be the first contestant on a reality show to be super shady. But I have a feeling that Rodgers is the worst kind of shady, because, on the surface, he seems entirely charming. But those dazzling eyes? That hotshot smirk? Underneath those lay the heart of a total shadeball. And I’m not pulling this out of nowhere. This dude has already done some seriously shady things during his very brief time on The Bachelorette.

1. He Was Sort Of Accused Of Cheating By His Last Girlfriend

As if anyone would need 10 more reasons after this. Jordan Rodgers’ former girlfriend posted a picture to Instagram on Tuesday that makes some major suggestion that the reason they broke up was not because of his football career, as Rodgers suggested on the show, but because he allegedly cheated on her.

2. He Already Has Crazy Strong Feelings For Her

No man should be falling in love on the first date. Period. End of story. The fact that he was completely into JoJo after a few minutes alone together smells super fishy to me.

3. JoJo And Jordan Knew About Each Other Beforehand

It’s still not clear why JoJo knew about Rodgers before the show started, but she did. The fact that his name was so public and everyone else’s was kept a secret makes me think his fame is going to be a big factor this season.

Check this teaser for the upcoming season. You know how it goes: The contestant that everyone hates is usually the biggest shadeball of the bunch.

The other guys accuse him of strutting around and showing off his stuff. Why? Who knows. But I don’t like it at all.

At least, that's what the other guys think.

7. He’s There For The Wrong Reasons

With there already being talk of him becoming the next Bachelor, I feel like that might be the endgame he went on the show with in mind — and that's not a good sign.

8. He Wanted That Kiss Badly

Again with the early moves. They skeeve me out hardcore. So the fact that Rodgers knew that he wanted to kiss JoJo after a brief conversation with her and then sought her out to make it happen just reads as all kinds of wrong to me.

9. He Won The First Impression Rose

Which means, statistically speaking, he might not actually win. Plus, you know that first impression rose is all about good looks and lust. That’s nothing to base a relationship on.

To date, how many times has Rodgers retweeted pictures of his hair or of him kissing JoJo? Oh, that’s right. Five times. For the record, that’s five times too many.

11. Even His Dad Commented A Bachelorette Stint Would Be Good For His Career

Apparently, Rodgers' goal is to be a sportscaster, and in an interview with KRCR TV in Rodgers' hometown of Chico, CA, Rodgers' father Ed Rodgers commented that his son doesn't have a problem with the ladies, and appearing on the show won't hurt his career advancement. I mean, that's not exactly untrue, but it doesn't really scream "looking for love" either.

So, you might be completely smitten with this guy, but I can smell a shady dude a mile away. And this one is already starting to stink.