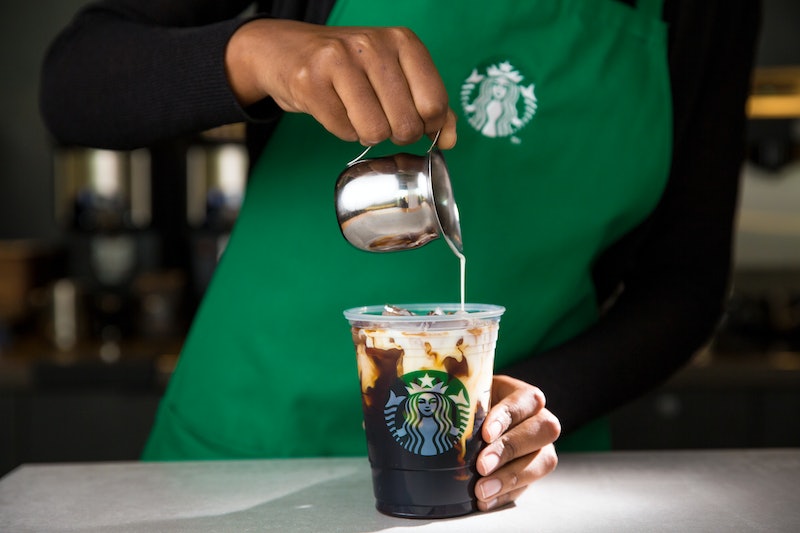 You know the week is off to a good start when Starbucks releases a new drink. Their latest creation combines the magical powers of vanilla and coffee, and I must say... I'm in love. So for all you loyal Starbucks drinkers who are wondering when you can get the Starbucks Vanilla Sweet Cream Cold Brew, the answer is... drumroll, please... starting today, May 31, and ending never! The drink is available in all stores and is a permanent menu item. I'll give that one a moment to sink in.

Starbucks first started flirting with cold brew back in August of 2014. Less than one year later, it had expanded to 2,800 stores and became a permanent menu option later than summer. Cold brew is no joke: Starbucks makes it by slow-steeping coffee in cool water for 20 hours! A Tall, 12-ounce Vanilla Sweet Cream Cold Brew has 140 milligrams of caffeine, guaranteeing you a nice little pick-me-up. These guys don't mess around when it comes to coffee. And this isn't the only gift they've given us today: Starbucks has also released their new Nitro Cold Brew. So much coffee, so little time.

You can buy the Starbucks Vanilla Sweet Cream Cold Brew from any Sbux shop across the United States and Canada. A Tall ranges between $3.25 and $4.25, depending on the market — and as I previously mentioned, there is literally no limit as to when you can get it. Part of the new Starbucks Cold Bar, it's available in perpetuity, because the coffee gods love us and want us to be happy.

The Vanilla Sweet Cream Cold Brew arrives just in time — it's going to be a scorching hot summer (who else spent Memorial Day weekend frying? Because I sure did). But let's be honest: I'd drink it in the middle of an Arctic snowstorm, because it's Starbucks, and it's always a good time for Starbucks. The smooth, rich, and slightly sweeter taste of cold brew has already proven to be hugely successful with coffee drinkers all over.

With the coffee chain giant consistently 10 steps ahead, I'm excited to see what else the hot weather season will bring. Now, go get caffeinated!