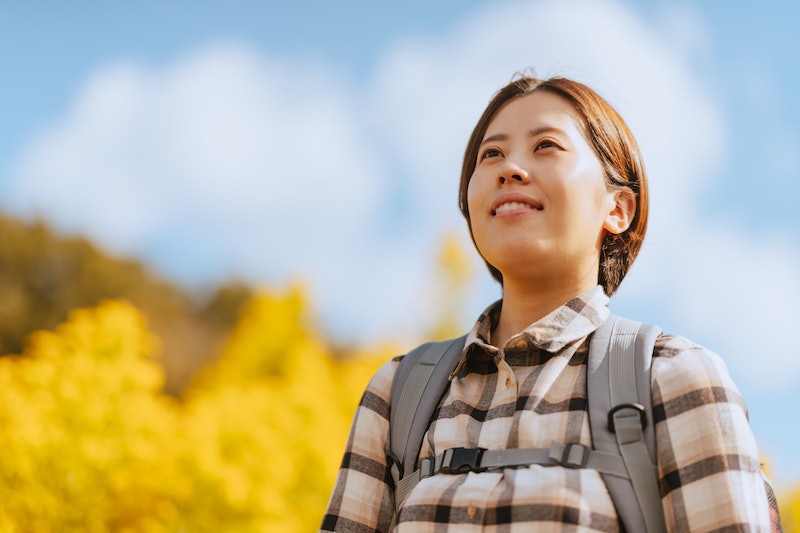 Personally, I feel the most alive when I'm outside — but I get that nature just isn’t everyone’s thing. Moreover, according to recent research on the topic, too much time spent in nature can actually be detrimental for some people. In fact, a recent study which will soon be published in the Journal of Consumer Psychology suggests that overdoing it on nature can actually stress out people with neurotic personality types more than city-living ever could. That said, whether you thrive in urban environments, dream of becoming a cabin-dwelling hermit someday, or (like me) fall somewhere in the middle of those two extremes, you should still probably try to get outside more — because there’s a figurative mountain of research proving that nature is good for our mental and physical health.

As far as mental health goes, nature is essentially free medicine. Not only do nature walks encourage positive thinking, but multiple studies have also shown that spending more time outdoors can help ease the symptoms of depression, anxiety, and ADHD. On top of that, outdoor exercise literally feels easier and makes people want to work out more frequently, and sunshine increases male libido.

So, whether you live in a tiny studio in Manhattan and absolutely love it, or you spend most of your downtime enjoying summer breezes on your front porch, you might want to consider upping your nature prescription — because there are some serious health benefits to spending more time in nature.

1. Walking In Natural Settings Cuts Down On Negative Thinking

As USA Today reported last July, walking in nature can help our overstimulated, stressed out brains focus on the positive instead of dwelling on the negative. Evidently, when we immerse ourselves in nature, all that natural beauty cuts down on rumination — a viscous cycle of thinking in which we can't seem to stop obsessing over all of our negative attributes and general f*ck-ups. Since rumination can eventually lead to depression, the fact that nature walks can effectively reverse rumination shouldn't be taken lightly.

In one study, published last year by the Proceeding of the National Academy of Science and conducted on 38 participants by Stanford University researchers, it was found that, "people who walked for 90 minutes in a natural area, as opposed to participants who walked in a high-traffic urban setting, showed decreased activity in a region of the brain associated with a key factor in depression."

Of course, this doesn't mean nature is a cure-all for depression and negative thinking, but it does mean getting outside can reduce your risk for depression. And if you currently suffer from depression, time spent in nature could be an effective addition to your treatment. Which brings us to...

2. Nature Can Work As An All-Natural Anti-Depressant

Unless you spend the bulk of your time in a cave or a basement apartment, (which, if we're being honest, is there really any difference between the two?) then you've probably experienced the mood-boosting qualities of nature on many occasions. Personally, I've always relied pretty heavily on nature to ease anxiety, and I've also counted on nature to help me combat bouts of situational depression. Lo and behold, studies suggest that ecotherapy (also known as green therapy, earth-centered therapy, and nature therapy) is an effective way to protect your mental health.

One such study, which was carried out by the University of Essex and whose results were published by the mental health organization, Mind, showed that taking a walk in nature reduced subjects' depression scores by 71 percent. Conversely, the study showed that only 45 percent of participants who elected to walk in a shopping center instead of strolling through natural landscapes showed reduced depression scores. What's worse is, 22 percent of the mall-walkers actually showed increased depression scores. (Finally, proof that malls really are depressing.)

If you're as into hiking and walking as I am, then you probably don't need anyone to tell you that working out is about 1,000 times more fun when you do it outside. Whether you enjoy outdoor exercise or not, though, research suggests that, in many ways, outdoor exercise is even better than going to the gym.

As Huffpost reported back in 2014, studies show that exercising in the great outdoors can literally make exercise feel easier, and it's primarily because the color green is basically magic. One such study, which was conducted by the University of Essex, tested the affects of the color green on a group of cyclists. The cyclists were instructed to pedal in front of green, gray, and red images and then asked about their experience. As it turned out, " Those exercising in front of the green showed less mood disturbances and reported that they felt lower exertion during their cycling." On top of that, other studies show that people who exercise outside are more likely to get excited about future workouts than self-proclaimed gym rats.

If your weekday afternoons were mainly spent playing outdoors like mine were, then it looks like we might have one more thing to thank our parents for. As The Atlantic reported in 2015, "Children with ADHD who regularly play in parks have been found to have milder symptoms than those who spend more time indoors."

Additionally, WebMD reported way back in 2004 that spending time in nature cuts down on ADHD symptoms in children ages five to 18. These findings were the result of a national study which was conducted by Frances Kuo, PhD, and Andrea Faber Taylor, PhD, of the University of Illinois at Urbana-Champaign. Researchers analyzed over 400 American children, both male and female, who had been previously diagnosed with ADHD. The kids, who were from urban, rural, and suburban settings, participated in various indoor and outdoor activities which their parents supervised. Unsurprisingly, when the time came for the children's parents to answer questionaries about their kids' behaviors, outdoor activities won by a landslide. Study authors, Kuo and Taylor stated, "In each of 56 analyses, green outdoor activities received more positive ratings than did activities taking place in other settings."

Interestingly, studies have shown that vitamin D helps increase men's sex drives and their testosterone levels. As the Daily Mail explained in their article on the topic, "Researchers at the Medical University of Graz in Austria found men with at least 30 nanograms of vitamin D per millilitre of blood had much more of the main male sexual hormone circulating than those with less."

Of course, it's worth nothing that a relatively recent study conducted by Harvard Medical School suggests testosterone may not be as crucial to men's sex drives as we once thought, but testosterone is literally a male sex hormone, and sunshine can help boost it. So if your current partner happens to have male anatomy, you might want to consider camping this summer. Couldn't hurt.

More like this
The Viral 'Little Miss' Franchise Is Focusing On Mental Health Next
By Darshita Goyal
Young People Are Still Experiencing Period Poverty In UK Schools
By Sophie McEvoy
The Best Time To Date After A Breakup, According To Experts
By Bustle Editors
What Is The Forest Personality Test? The TikTok Trend, Explained
By Georgina Lawton
Get Even More From Bustle — Sign Up For The Newsletter