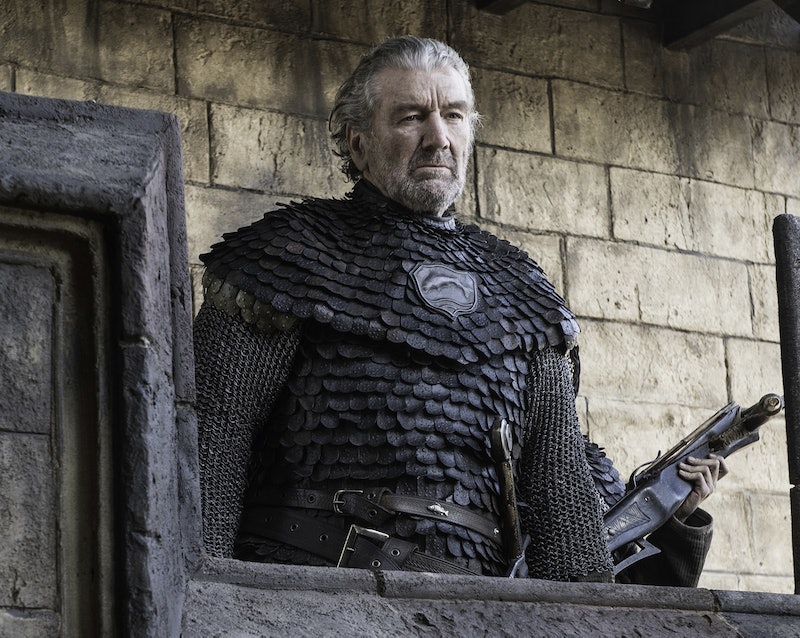 Let's all be honest for a second: Game of Thrones can be pretty dang confusing, between all the seven kingdoms of Westeros, not to mention the city states across the narrow sea. It can be difficult to keep track of all the characters, let alone their loyalties, relationships, and how they're relevant to the story. So if you're wondering who the Blackfish is and why he's important, don't worry; I've got you covered. In George R. R. Martin's A Song of Ice and Fire novels, the Blackfish is the nickname for Brynden Tully, Catelyn Stark's uncle and a renowned warrior of House Tully and the Riverlands.

In the novels, the Blackfish isn't present at the Red Wedding, and holds the home of House Tully, Riverrun, while forces from the Freys (remember, the guys behind the Red Wedding) attempt to take the castle with the help of Jamie Lannister. Jamie offers Brynden a chance to become a member of the Night's Watch if he surrenders, but the Blackfish refuses. Eventually, the Freys capture the castle because they have Edmure Tully (Catelyn's brother and the Blackfish's nephew) as a hostage after the events of the Red Wedding. Last we hear of the Blackfish in A Feast for Crows, he has escaped Riverrun and become an outlaw.

It seems Game of Thrones has largely skipped over the Blackfish's storyline between the Red Wedding and losing Riverrun to the Freys. In Season 6, Brynden, who was at the Red Wedding but escaped, is first mentioned by Petyr Baelish in "The Door" while speaking to Sansa Stark. When she refuses his help and his forces from the Vale, he informs her that her great uncle is amassing an army at Riverrun. After returning to Castle Black, Sansa sends Brienne of Tarth to speak with the Blackfish about helping her and Jon Snow take back the North.

Then, in "Blood of My Blood" we learned that the Blackfish's forces had retaken Riverrun from the Freys. As a result, patriarch Walder Frey sends his army along with the hostage Edmure to confront him. Meanwhile in King's Landing, Tommen removes Jamie Lannister from the Kingsguard and sends him to assist the Freys in capturing Riverrun. Now, both the Freys and Jamie Lannister are heading to the Riverlands.

So what does this all mean for Game of Thrones? Well, based on the promo for "The Broken Man" the Blackfish will finally return to our screens for the first time since Season 3, and he'll be confronted by Jamie. Could this be an adaptation of the Siege of Riverrun from the books? Or will it be something new that hasn't happened in Martin's novels? It's difficult to say, since all viewers are pretty much equally in the dark about where Game of Thrones is headed, since the show has now largely diverged from the books.

But if I had to guess, I'd say that this is as close to an adaptation of the Siege of Riverrun as we'll get, though it will certainly be different from the books because of where it's falling within the larger narrative of the show. Specifically, these events are taking place at the same time Sansa and Jon are attempting to amass forces of their own to retake Winterfell and the North. Still, with Lannister and Frey forces on his doorstep, the Blackfish may not have any help to spare for his grand-niece. So we'll have to wait and see how it all plays out, but the Blackfish is surely going to play an important role no matter how Season 6 progresses.