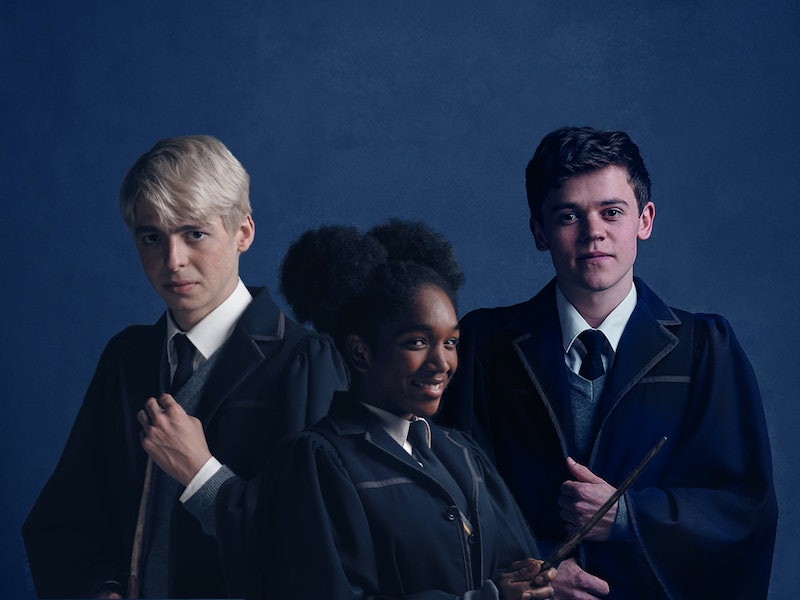 Not to brag, Potter fam, but I theorized yesterday that Albus, Rose, and Scorpius would be the new Golden Trio in Harry Potter, and today the Pottermore gods have proven me right. While we've all been freaking out over the patterns forming in the staggered release of this week's cast photos from Harry Potter and the Cursed Child , the most prominent one by far is that the narrative will definitely focus on the next generation kids who happen to be starting their first year at Hogwarts. And boy oh BOY am I ready for the hijinks these little punks get into at Hogwarts.

It only makes sense that J.K. Rowling would set us up for another three musketeers situation. Fans unofficially dubbed Harry, Ron, and Hermione the Golden Trio, then dubbed Ginny, Luna, and Neville the Silver Trio — some even going as far as naming Draco, Blaise, and Pansy the Bronze Trio. And while teaming Albus, Rose, and Scorpius up might seem curious, seeing as Scorpius's father is an old enemy of Albus's and Rose's parents, it actually makes a lot of sense. Pottermore hinted that "past and present fuse ominously" for both Harry and his son Albus, and there is no faster, more effective way for that to happen that a collision course with one Scorpius Malfoy.

That aside, there are plenty of other potential reasons including Scorpius in the trio would make sense. For instance, it is highly likely at this stage in the game that Albus Severus Potter will be a Slytherin, which may be the cause of a lot of tension in the show. If that were the case, he would naturally be spending more time around Scorpius. It's also possible that Albus is sorted into Slytherin and, conversely, Scorpius is sorted into Gryffindor, and they bond over the fact that they feel displaced from their family legacies (a sentiment Rose might share if she turns out to be sorted into Hufflepuff like the pictures may indicate). In any case, the circumstances are certainly aligning for the three of them to forge some kind of bond — one so epic that the play will span two parts.

So what shenanigans could this new trio get up to, in a world that has supposedly reformed itself from the dark days of the original trio's past? Here are three plot lines that could forge an unlikely friendship between the three of them:

Albus, Rose, And Scorpius Have To Team Up Against Old Death Eater Sentiments Infiltrating The Castle

Look, there was a giant bajillion-pound basilisk chilling in the walls for decades. Weirder things have happened in Hogwarts. And you can't tell me that there aren't a few holdout Death Eaters bitter about the way things ended in the Second Wizarding War, especially considering most of them were first war leftovers who got screwed over twice.

So what what does this have to do with the new trio? I imagine that Albus and Rose are already friends, the way that Ron and Harry were friends pre-Hermione. Because of what they've heard about the Malfoys from their parents, maybe they assume that Scorpius is involved in whatever terrible Death Eater things are happening at Hogwarts. Once they overcome the hurdle of those presumptions they strike an unlikely friendship, with Albus and Rose fighting their parents' demons and Scorpius joining in to help clear his family name. As we know from the original series, nothing brings a team of ragtag 11-year-olds together quite like the threat of imminent peril!!

Albus Is Actually, Literally "Cursed" — And Rose And Scorpius Are Somehow Involved In The Prophesy

It's only been 19 years, so the statistical odds of Trelawney sticking around to royally screw over another Potter kid are pretty high. I have no idea what she could foretell regarding Albus, but this would be the fastest, most literal way to "curse" him — and with Albus's lineage, it would be very clear exactly who the prophecy is talking about. If this were the case, then maybe Rose and Scorpius will be secondarily affected by the prophecy or "curse," the same way Voldemort and Neville were in the prophecy made about Harry.

I mean, yeah, this sounds a little dramatic and way too literal. But at the same time, why else would they be calling Albus a cursed child? How is he any more or less cursed with the burden of his family legacy than James Sirius or Lily Luna? Yes, he was named after some controversial wizards, but that's certainly not enough to "curse" a kid. This idea might not be as far-fetched as we think — and if it comes to pass, Scorpius and Rose will undoubtedly get roped into it, for better or for worse.

Scorpius on vocals, Rose on guitar, Albus on the drums, I AM CALLING IT. This show is going to be a two minute walk down nostalgia lane and then four hours of the sickest beats you've ever heard this side of Ilvermorny. CHECK THAT SWAG.

For more information about Harry Potter and the Cursed Child, check out the official website.