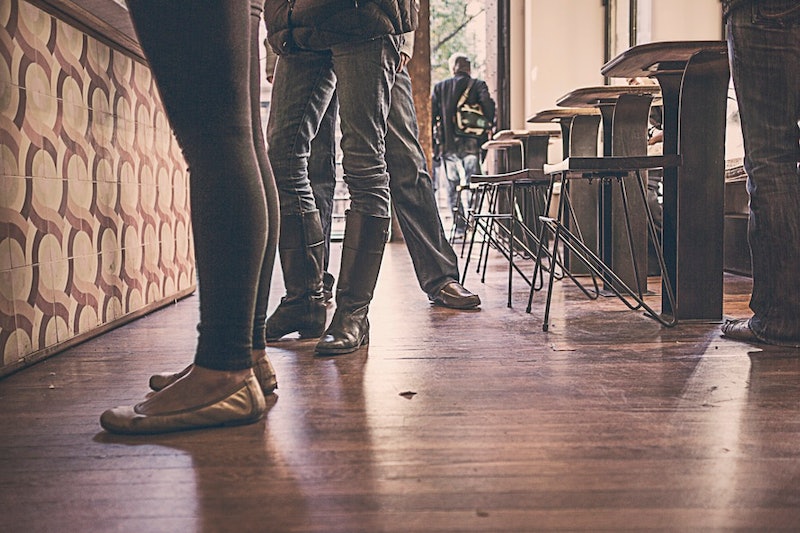 If you're an introvert, then words like "networking" or "holiday party" probably send shivers down your spine. Maybe it's because you've had a few bad experiences, or you're just painfully shy — I totally get it. But trust me when I say that once you get the hang of making small talk and meeting new people, such gatherings suddenly won't seem so scary. You might even find the getting-to-know you process can be quite fun.

The key to making small talk, whether it's at a networking event, at the bar, or in an elevator, all boils down to one thing — confidence. When you feel nervous, or like you have nothing interesting to say, it's reasonable to expect a stuttering, awkward convo. But if you march into such situations armed with a positive attitude, you'll likely find yourself chatting away with the best of them.

It really is a skill you want to lock down sooner, rather than later. Small talk comes in handy for work, dating, making new friends, getting to know your neighbors — the list goes on and on. Yes, it can be awkward, and yes, it takes some getting used to. But you can do it, shy, introverted, or otherwise. Below are some tips for making the process a bit easier, and maybe even kind of fun.

Check Out: The Fine Art of Small Talk: How to Start a Conversation, Keep It Going, Build Networking Skills -- and Leave a Positive Impression , $11, Amazon

1. Go In With High Hopes

Whatever you do, don't head out into the world thinking you're horrible at small talk, you'll never meet new people, you're too shy, etc. etc. "Thoughts tend to be self-fulfilling. If you approach small talk with the belief that it will be dull and pointless, it probably will," said Christina Park on Forbes. To keep a positive attitude, remember that this small talk can lead to bigger and better things, so get in there and do your best.

2. Forget About Your Phone

It's hard to remember a world without our go-to comfort device. However, anxiety-reducing as they may be, phones are not helpful when it comes to starting a convo. That's why it's best to leave yours off, or in your pocket, and push yourself to keep a conversation going, according to Lily Herman on TheMuse.com. When you're not staring down at a device, greeting people and chatting will feel 100 times easier.

3. Spot Who Is Ready To Talk

Figuring out who is ready to talk — versus who wants to ride the elevator in peace — can be a bit tricky. But there are cues to watch out for. "People who are eager to get involved in a conversation will typically give you some sort of signal. If they’re consistently looking away, they may be enjoying a moment of zen ... or just not in the mood for idle chatter," said Susan Krauss Whitbourne, Ph.D., on Psychology Today. Only approach those who look open and friendly, and the chit chat flow will naturally.

4. Throw Out Some Compliments

Everyone loves a compliment, but they can sometimes come off as awkward or cheesy. So give the C& T method a try. "C & T stands for compliment and transition," said Kevin Kleitches on HuffingtonPost.com. "After you compliment someone, immediately follow up with a question or statement that takes the focus away from your praise. It could be something like, 'I love your outfit, you’re dressed so nicely today' followed by, 'How’s your day going?'" It's a very sweet, and decidedly not awkward, way to communicate.

5. Have A Go-To Topic Of Conversation

If you expect to clam up at the party or networking event, then prepare yourself ahead of time with a few conversation starters. As Alan Henry said on Lifehacker.com, "... when you meet someone new, it's always good to have a go-to topic of conversation you're comfortable with when talking to someone new and trying to get to know them." Think topical news, or a simple "What brings you out tonight?" It can be as easy as that.

6. Be All About those Open-Ended Questions

Open-ended questions are your friend, especially if the conversation is lagging. "Asking the right question means that the other person won’t have to work too hard to engage, but also won’t be able to get away with a simple yes-or-no answer that will stop the conversation cold," noted Leslie Moser on Inc.com.

Get togethers are prime opportunity for picking people's brains, so have fun delving deeper, and learning new things. Besides, people really appreciate when you take an interest in their lives and stories. "If you show true interest, you’ll invite further discussion and set a positive tone for future interactions," Park said. And that is the goal, after all.

8. Embellish The Convo With Fun Stories

The thing about conversations is they may start off one-sided, but they can't stay that way for long. Eventually you'll have to talk about yourself, so be ready with some fun tidbits, or interesting stories. "By providing multi-faceted responses, you can provide 'hooks' for the other person to continue the conversation," Park said. This will make the exchange more fun for you, as well as easier (and interesting) for the other person.

9. Talk About Your Surroundings

Sometimes, try as you might, small talk doesn't go well. Maybe you don't have anything in common, or the other person isn't giving you anything to work with. When that's the case, start chatting about your surroundings. As Jennifer Tung said on Real Simple, "It sounds like a cop-out, but it works."

For the shy and nervous, there is nothing more dreaded than a lull in conversation. The thing to remember, however, is that silences are perfectly natural. It's best to think of silence as a transition, according to Tung, instead of a painful thing to endure. Let the other person digest what you said, and respond in their own time. It'll be OK. I promise.

No matter what happens, don't beat yourself up before, during, or after the conversation. It'll only ruin your confidence, and make you less inclined to try small talk in the future. "If you botched up a conversation or wish you hadn’t said this or that, take a few minutes to reflect and focus on your 'takeaway' lesson for next time. Then simply let it go," Park said. You'll do better next time.

Keep these things in mind when meeting new people, and you'll be able to successfully, and confidently gab the night away.