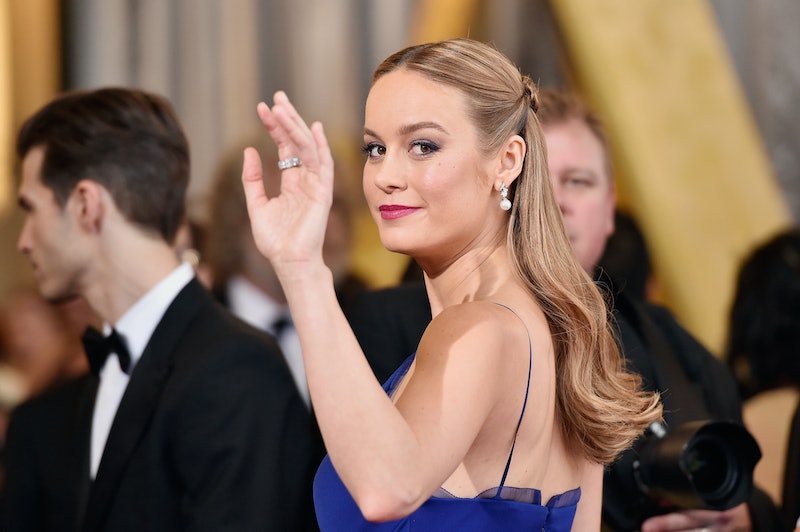 Our most recent Best Actress winner might not be a superhero in real life, but she's about to play one on the big screen, if reports that Brie Larson will star in Captain Marvel turn out to be true. The 26-year-old actress, who most recently tore our hearts out as Ma in the Oscar-nominated drama Room, is rumored to be in serious negotiations with Marvel Studios to head the Marvel Cinematic Universe's first female-led feature film franchise (following in the footsteps of Agent Carter and Jessica Jones on ABC and Netflix).

Although we have yet to see the budding starlet star in a franchise as big as the MCU, there are plenty of reason to believe that Brie Larson is the perfect choice to play Carol Danvers. Her impressive resumé (which stretches all the way back to 1998, when Larson was only 9 years old) features a plethora of roles on both the big and small screens that prove she has what it takes to play a superhero. Larson has come a long way since she played "Roadkill Easy Bake Oven" on The Tonight Show With Jay Leno, and she's already displayed her impressive superpowers many times — like in these 11 movies and TV shows:

Larson starred in this early-aughts WB sitcom as Bob Saget's precocious daughter Emily, and, no matter where her older sister Sarah (Thor's Kat Dennings) hid her diary, Emily always managed to find it.

In this family-friendly adventure, Larson teamed up with Logan Lerman to stop Agents Of S.H.I.E.L.D.'s Clark Gregg from destroying an owl habitat to build a pancake restaurant. My hero.

Larson literally had a superhero alter ego in this short-lived Showtime dramedy, on which she played Toni Collette's teenage daughter Kate — who liked to dress up in a costume and go by the name Princess Valhalla Hawkwind. (To perform webcam peep shows, not save the world, but still.)

In this interview, Larson reveals that she recruited her real-life friends to play extras in a party scene in this Ben Stiller drama (in which she played his niece, Sara). The shoot involved five nights in a row of starting at 5:00 p.m. and finishing in the early hours in the morning, so she must have exerted some kind of mind control over her friends to get them to agree to that insanity.

Larson literally has a superpower in this cult classic based on a graphic novel; in the role of Scott Pilgrim's ex Envy Adams (now dating Ramona's ex, telekinetic vegan Todd), Larson captivated the crowd as the lead singer of the band The Clash At Demonhead.

Miles Teller's party boy Sutter really needed someone to get honest with him in this coming-of-age film; good thing Larson's Cassidy was around to talk some sense into him as she dumped him, telling him that he was in sore need of some growing up.

The first role that garnered Larson some serious Oscar buzz (although she came up just shy of a nomination), Short Term 12's Grace — the supervisor of a group home for troubled youth — stole our hearts and then broke them and then healed them again as she cared for the damaged kids in her care.

In one of her funniest roles, Larson communicated her thoughts as Joseph Gordon-Levitt's teenage sister Monica almost entirely without talking, using texts and her extremely expressive face instead. Only when her brother was dumped by Black Widow herself (Scarlett Johansson) did she really pipe up to speak her mind.

It would take a special girl to be on the same wavelength as Community's Abed — and Larson's Rachel turned out to be just that girl, recurring on a few episodes as the super-nerd's surprisingly sweet love interest. Too bad Larson's burgeoning film career kept her from returning, although the show got to make a nice meta joke out of it.

Of course, it's crucial that a superhero always remains loyal to their team — otherwise look what happens. (*cough*Civil War*cough*) And if Kim could put up with and stick by her hot mess of a sister throughout Amy Schumer's Trainwreck, then you know Larson's Carol Danvers will be a valuable team player for the fractious Avengers.

In the role that won Larson her Oscar, her character Ma was kidnapped, raped, gave birth in captivity, and raised her son Jack to somehow function within the claustrophobic confines of their cell. Of course, they both had their difficult moments, but they never gave up; if she can survive that traumatic experience, then Larson can handle anything the MCU will throw at her.

Hopefully we'll get official word on Larson's casting soon… although Marvel would have to be crazy not to hire her, if these 11 roles are any indication.