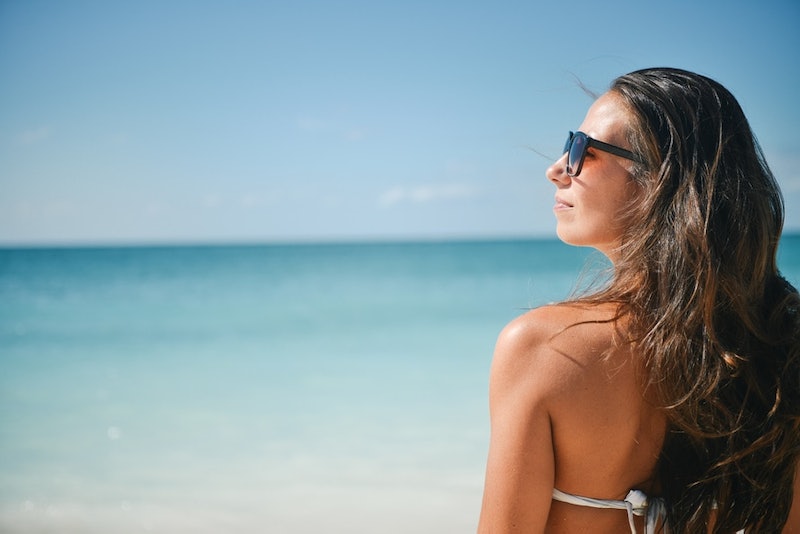 Here we are again, that beautiful time of year when everyone goes leaping outside without a hat or sunscreen, despite the fact it's sunny AF. It seems so innocent, and yet mere minutes later, you find yourself bright red and looking for ways to soothe your sunburn.

If you're like me, this insta-sunburn often comes as quite a surprise, mostly because no one intends to get sunburned. A quick walk around the block, an hour at the beach, a dip in the pool — it doesn't feel like a big deal, much less one that will end in painful blistered, red, and peeling skin. But trust me, it doesn't take long to burn.

If you have pale skin that can tan, but usually burns, expect to turn pink in under an hour. On higher UV Index days, pale skin can burn in as little as ten minutes, according to SunSafetyAlliance.org. Days with such a high UV index (7 to 10) require at least SPF 45, sunglasses, and a hat to stay protected.

If this happens to you more often than not, then stay prepared for the aftermath with some ways to soothe the burn. Sure, aloe vera is a good go-to. But if you're taken by surprise, and have nothing on hand, never fear — you probably already have a few skin-healing items laying around the house. Here are a few of the weirder ones that do a good job of curing the sting.

1. Smooth On The Shaving Cream

The next time you're all out of aloe vera, scour your bathroom for a different kind of sunburn soother — shaving cream. According to Amanda Chan on HuffingtonPost.com, shaving cream is a popular go-to sunburn treatment because it contains menthol. This highly volatile compound evaporates fast, thus taking the heat from the sunburn with it. Sounds oddly soothing, right?

2. Soak In Some Oatmeal

Remember soaking in an oatmeal bath to cure your chickenpox as a kid? It worked so well because oatmeal soothes inflammation, which is why it'll treat sunburn, too. As Taylor Shea suggested on RD.com, "Stuff an old nylon stocking with oats and place under the faucet as you run some cool bathwater. Soak for 15 to 20 minutes and air-dry yourself so you don’t wipe off the healing oats with your towel." Your skin should feel better in no time.

3. Be All About Tomatoes

Tomatoes will help you deal with sunburn in two ways: you can eat them, or soak in their juices. "When applied to burns of any type, fresh tomato juice alleviates redness and inflammation and soothes the skin," said Rachel Krause on StyleCaster.com. "Thanks to lycopene, eating tomatoes can actually improve the skin’s ability to protect itself against UV rays, which means that your body can build a defense against those harmful rays." (This doesn't mean you should skip on the SPF, however.)

4. Dunk Yourself In Plain Yogurt

I've made more than one yogurt face mask in my life, and you probably have, too. So maybe smearing yourself in yogurt isn't the weirdest thing ever, but it's still worth adding to the list. "The probiotics that yogurt is known for help to restore the skin’s natural barrier, reinforcing healthy pH and neutralizing the sting of the burn," Krause said. "Apply a thick layer to your sunburned area and leave it on for 5-10 minutes, then wipe it off with a clean, damp towel and moisturize well."

Ah yes, baking soda. It's one of those things that can be used for everything — including a sunburn treatment. "Bicarbonate of soda helps soothe skin inflammation, reduces itching, and helps treat sunburn," noted Shea. "Toss a handful into cool bathwater and soak for 20 minutes."

6. Dab On The Noxzema

I haven't thought about Noxzema in years, but I may just go pick some up for the summer. Turns out, it's a pretty great sunburn treatment, according to Rebecca Gruber on POPSUGAR. One of Gruber's readers wrote in to say it was the only thing that soothed her second-degree burns. Definitely worth a try.

Milk is another weird treatment for sunburn, but the reasoning isn't so strange. Just like oatmeal and tomato juice, milk has anti-inflammatory properties that can help cure your burnt skin, according to Niki McGloster said on Elitedaily.com. The best way to apply milk is with a cold compress. Simply pat it on, and let it do its things.

8. Chill Out With Ice

On a regular day, a cold (or even cool) shower would be my worst nightmare. But if I get a sunburn, I'm suddenly all about them. As Chan said, "... experts agree that a cold shower can help cool the skin and make it feel better." Ice can obviously do the same thing, if you'd like to rub some over your skin. Just be careful when applying the cubes, as ice burn can cause additional damage, noted Chan.

9. Drizzle Yourself In Apple Cider Vinegar

Much like baking soda, apple cider vinegar can seemingly do no wrong. That's why it's (surprise!) an amazing sunburn treatment. To apply it properly, soak a towel in a 1:1 dilution ratio of apple cider vinegar and cold water, then press it on your sunburned areas, according to Krause.

Pomegranate seeds also help your skin protect itself, from the inside out. Pom arils (seeds) are full of antioxidants, so they help prevent skin from burning, McGloster said. So pack a few the next time you plan on passing out by the pool, or lazing around for hours on the beach.

When it comes to applying potatoes to your sunburn, think of them in the same way you'd apply cucumber to your eyes. Cut raw, refrigerated potatoes into thin slices, and then gently apply them to sunburned areas, Krause suggested. Their starchy compounds are where it's at for sunburn relief.

Remember, the best way to protect your skin is to prevent sunburns in the first place with hats, SPF, and comfy beach coverups. But if you forget and find yourself red as a lobster, remember a few of these weird ingredients, and get to soothing that burn.

More like this
12 Absolutely Angelic Cherub Tattoo Designs
By Paris Giles
This Week’s New Makeup Releases & More Beauty Headlines
By Audrey Noble and Erin Stovall
The Body Shop’s New Range Has More Antioxidants Than Retinol
By Justine Knight
Your Guide To Treating Hyperpigmentation, Straight From The Pros
By Shani Hillian
Get Even More From Bustle — Sign Up For The Newsletter