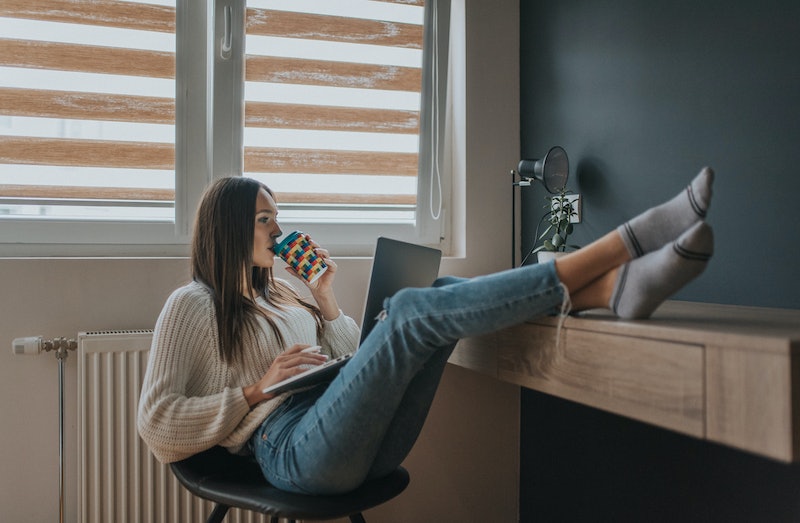 Thanks largely to the Internet, telecommuting has grown among the non-self-employed, U.S. workforce by about 103 percent since 2005. Moreover, as of January 2016, Global Workplace Analytics reported that 50 percent of the U.S. workforce hold jobs that allow them to work from home at least part time, about 20 percent of Americans work from home frequently, and a whopping 80 to 90 percent of U.S. workers would like to work remotely two to three days a week. Additionally, according to some studies, people who work from home are more productive, healthier, and happier overall. That said, people who work from home face their own unique set of challenges, so there's definitely some things you should know about the gig before you decide to take your work home with you.

Personally, I've been working almost exclusively from home for nearly a year now, and most of the time, I love it. After spending years working in stuffy offices, loud restaurants, and over-crowded clothing stores, working from home is a dream come true for this ambiverted writer. That said, I'll be the first to admit that working from home isn't always easy; sometimes you need a physical separation between where you binge-watch Netflix in your pajamas and where you get sh*t done.

Most people who work from home will tell you that there are going to be days when the only way you'll get anything accomplished is by leaving your house. (Which is why I'm currently writing this from a cafe's corner booth while blaring Spotify's Acoustic Concentration playlist on my headphones.) Overall, though, working from home — at least some of the time — seems to be the ideal setup for most people. So if you're trying to decide if the telecommuting lifestyle is for you, here are a few things you should know about the personality traits of people who work from home.

1. People Who Work From Home Are More Likely To Love Their Jobs

Earlier this year, Forbes contributor Mike Murphy and his firm, Leadership IQ, surveyed 3,478 employees using an online test called “Is Your Personality Suited To Working Remotely Or In The Office?” Employees were asked a variety of questions, including where they typically worked, (in-office, mobile, or telecommute) and how they felt about their jobs.

Unsurprisingly, Murphy and his team discovered that people who work from home are 87 percent more likely to love their jobs than people who work in traditional work sites, such as office buildings. The survey also found that people classified as "mobile workers" (people who use multiple work-spaces both in and out of the office) were about 58 percent more likely to love their job than their office-bound peers.

2. People Who Work From Home Are Typically More Ambitious

Contrary to popular opinion, people who work from home aren't actually slobs or slackers. In fact, according to Murphy's test, mobile and telecommuting employees are more ambitious and competitive than folks who are stuck in offices all day. Murphy and his team discovered this by having remote, mobile, and office-based employees choose between these two statements:

3. People Who Work From Home Are More Likely To Pull All-Nighters To Meet Deadlines

I won't pretend I've never missed a deadline, but just the other night, I woke up at 2 a.m. so I wouldn't miss a deadline, and that's not the first time I've kept super weird hours just so I could get a story filed on time. According to Murphy's test, I'm not the only remote employee who will sacrifice sleep for work, either. In his Forbes article, Murphy reported that most people who work remotely are essentially deadline-wizards. To find out how work settings affect the way employees meet deadlines, Murphy asked remote, mobile, and in-office employees to choose between these two statements:

Surprise, surprise, people who work primarily from home won this round, too. Murphy and his team discovered that both mobile and telecommuting employees, "are significantly more likely to say they’re willing to pull all-nighters than their office-based peers." This only applies to those mobile and remote workers who also stated that they loved their jobs, but since that's the majority of us, I think it's safe to say that people who work from home are more likely to coffee-up and work all night than office-based folks. (Honestly, though, I don't blame them. I don't think I'd want to pull an all-nighter after spending my entire day in an office, either.)

Back in 2014, a nine month study from Stanford found that remote work made people happier, more productive, and less likely to quit their jobs. When employees were offered the opportunity to work from home, they discovered that, "compared with office counterparts, those working from home made 13.5 percent more calls, quit 50 percent less, and said they were much happier on the job."

5. ... But Remote Freelancers Are At A Greater Risk For Depression

Unfortunately, as Fast Company reported back in 2013, working from home as a freelancer can be hard on your mental health for a variety of reasons. According to several studies conducted in both the U.S. and abroad, "Overall, self-employment was found to be associated with relatively few mental health benefits." This may have more to do with the unpredictable nature of freelance work than the whole working-from-home bit, though, because working from home does seem to make people happier and more productive when there's a steady paycheck in the mix, as we saw above.

An Australian study from way back in 2004 found that freelancing from home gave men zero health advantages, while it actually contributed to a decline in women's health. Additionally, according to a Dutch study which was published in 2008, freelancers are more likely to struggle with maintaining a healthy work/life balance, and this can lead to depression.

Interestingly enough, in the case of the Dutch freelancers, the onset of depression wasn't due to the fact that the freelancers in question were working too many hours. Rather, it was because they couldn't stop thinking about work when they were at home and "off the clock." As Fast Company explained it, "People who couldn’t stop thinking about work or checking their email at the dinner table reported more aches and pains, more exhaustion, and felt that they were doing a worse job. When you work from home, obviously, it’s especially difficult to leave your work at work."

So, should you work from home, or not? As Jamie Lutz reported for Bustle back in 2015, although ample research suggests that working from home makes employees happier and more productive, some studies also show that remote work is most effective in moderation. In fact, according to a report which was published in last October's issue of Psychological Science in the Public Interest, when it comes to working from home, " a balance of face-to-face and virtual contact may be optimal." This balance seems to be particularly important in the beginning phases of work projects. According to the above-mentioned report, "In work that involves projects with certain lifecycles, face-to-face interaction may be particularly important during the projects’ early phases."

So if group projects are a regular part of your job, then it's probably in your best interest to split your time evenly between working from home and logging those office hours. Even if your work typically doesn't require someone else's input, though, you might still want to consider taking it slow with any future transitions from working in-office to working remotely. The fact is, working from home doesn't work for everyone, and that's OK. But if you're self-motivated and ambitious with a full time job, it looks like it could be a great option.