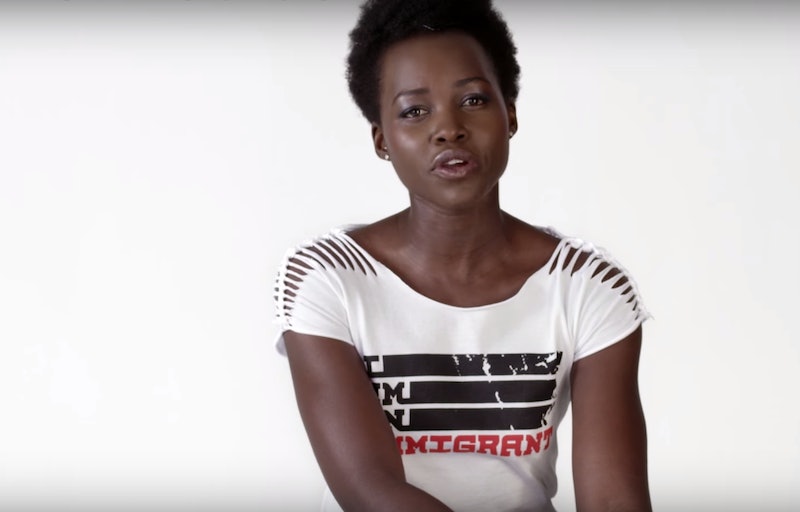 Lupita N'yongo, Rosario Dawson, Tom Colicchio, Wilder Valderrama, Akon, and Kerry Washington are just some of the celebrities spreading awareness about immigration and refugees during June's Immigrant Heritage Month. In a video to promote the movement, started by the nonprofit Welcome.us, the celebrities discuss the importance of immigrants in the history and fabric of America, and the message is timelier than ever.

In the video for the campaign, the always-inspiring N'yongo, sporting an #IAmAnImmigrant shirt, says, "What I think is so wonderful about America is the fact that it's a society of immigrants." Immigration reform is one of the most crucial and divisive issues of the 2016 election, and has prompted vitriolic and violent hate speech, particularly from presumptive Republican nominee Donald Trump. This video and the #IAmAnImmigrant campaign, in which all immigrants and children of immigrants can participate to tell their stories, encourages people to embrace and celebrate their immigrant heritage and to pay respect to the sacrifices of their families.

The video not only encourages others to share their stories on the site — you can add photos through a "meme" filter that will appear there for the month of June — but also, though it does not mention it by name, can't help but draw attention to the Syrian refugee crisis, as well as immigration reform. On the campaign's site, they write as their mission: "#IAmAnImmigrant honors each of our families’ sacrifices, struggles and successes — America’s strength is reflected in our diversity built over generations."

Here in the United States, it's easy to forget the urgency of the refugee crisis, but it's dangerous to do so. MercyCorps has called the displacement of refugees fleeing the Syrian Civil War "the worst humanitarian crisis of our time." A recent video from Amnesty Poland surfaced and went viral, showing Europeans and refugees doing an exercise while they looked into each other's eyes for four minutes, to show that humanity did not stop at borders. There are many touching stories like this, but the fact remains that this crisis should be vital enough on its own to prompt action.

At the #IAmAnImmigrant website you can add your own photo and story and see portraits of all the celebrities who participated. The portraits were taken by Beasts of No Nation director Cary Fukunaga, whose father was born in a Japanese incarceration camp during World War II, according to NBC News.

You can add your own story if you feel so compelled to, but even if you do not want to share online, take some time this month to reflect on your own immigrant heritage. You can tweet stories about your own family history on Twitter with the hashtag #IAmAnImmigrant, and the movement hopes to incite compassion and solidarity in the ever-changing landscape of America.