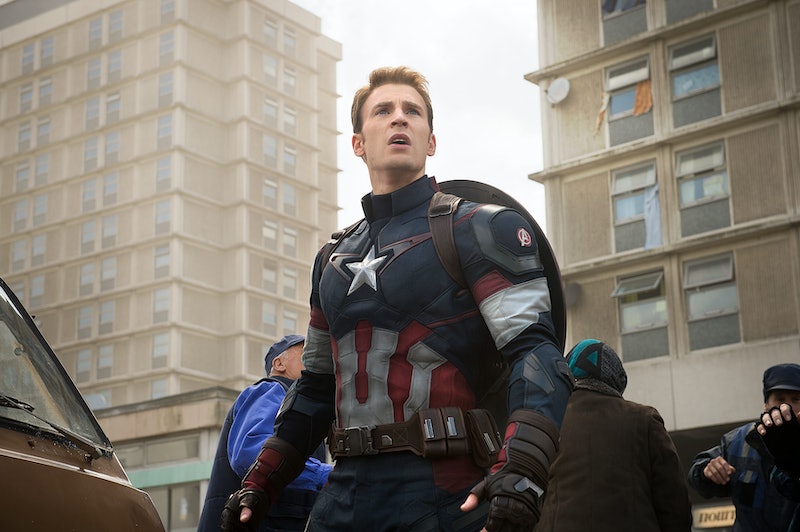 Marvel is busy looking for the right woman to bring Carol Danvers to life on the big screen, and right now Room star Brie Larson is considered the frontrunner. While Larson has not officially nabbed the role yet, she's rumored to be taking it on, and now she has some added support; Captain America himself, Chris Evans, wants Larson to be Captain Marvel just as much as you do. Entertainment Weekly reports that Evans commented on the Captain Marvel casting rumors at a Wizard World panel in Philadelphia.

From Cap's mouth to Marvel's ears. The Captain Marvel movie is not slated to hit theaters until 2019, but the movie is hugely important as it will be the first Marvel movie to focus exclusively on a female hero. Within the comic book universe, Carol Danvers is a member of the United States Air Force who becomes Captain Marvel after her DNA is fused with DNA from the Kree alien race. As a result, Carol has been a key member of the Avengers for decades now, and she even takes up Captain America's shield at one point. That makes Evans' endorsement all the more special.

Larson is the perfect actor to take on the role of Captain Marvel. She has proven she can take on both prestige parts and blockbuster roles and lend both a real sense of gravitas and humanity. Her character in Room was a real life hero, and she is set to come face to face with King Kong in Kong: Skull Island. Even better, Larson has proven she can disappear into her characters, making her an ideal star to bring Carol to life.

Having Evans on Team Larson is just a bonus. Hopefully, Marvel will lock down the actor now so Captain Marvel can appear in a Marvel movie alongside the current crop of Avengers. As much as I am looking forward to the Phase Three lineup of Doctor Strange, Spider-Man Homecoming, Black Panther, and Captain Marvel, I would love to see Captain America and Captain Marvel fighting side by side before 2019 rolls around.

Given how psyched Evans sounds about the possibility of Larson joining the Marvel Cinematic Universe, I suspect Marvel will make things happen. It's hard not to want to make Larson Captain Marvel when she has even Captain America on her side.