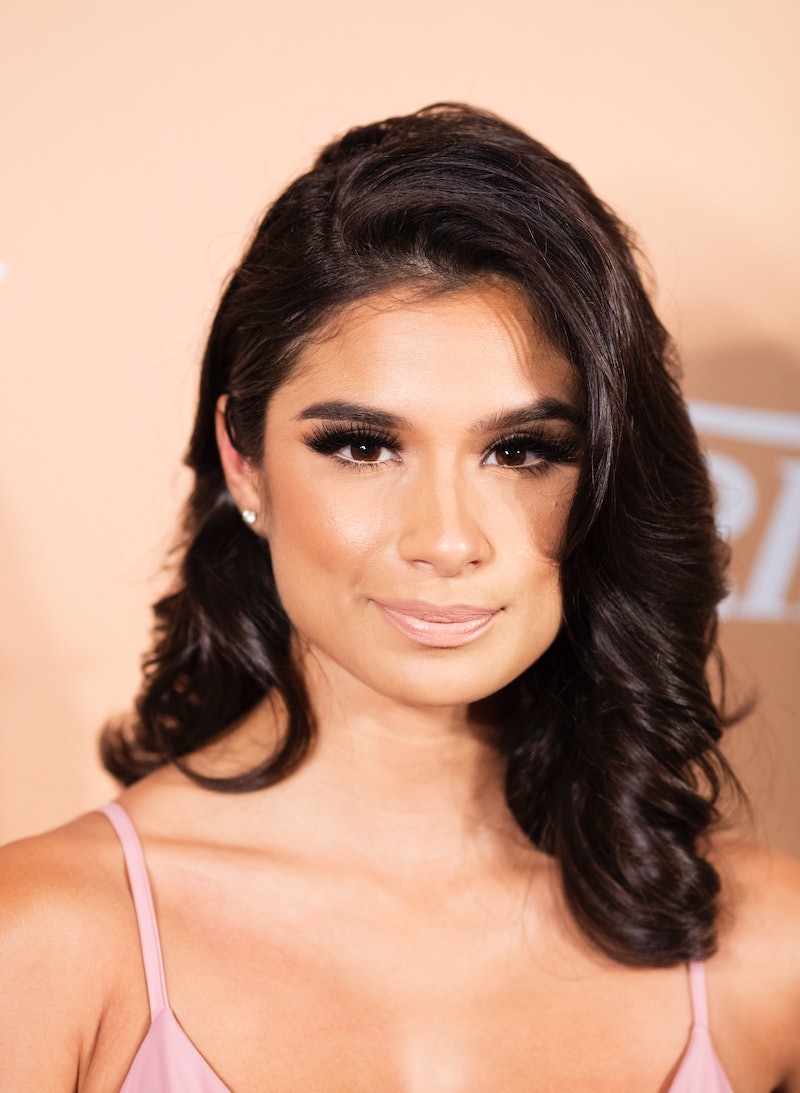 From Tina Fey and Amy Schumer to Jenny Mollen and Bobby Brown, it seems like there's a new celebrity memoir hitting shelves all the time, but this year, there's one you should really be paying attention to. When it comes to Diane Guererro's memoir, there are plenty of reasons you should read In the Country We Love , because it is much more than a celeb tell-all.

Best known for her roles as Maritza Ramos on Orange Is the New Black and Lina on Jane the Virgin , Diane Guerrero has exploded onto the scene and made a name for herself as a powerful, hilarious, and beautiful Columbian American actress, but her story started long before she gained recognition on the small screen. The child of undocumented immigrants, Guerrero was born in the United States, but the rest of her family, including her parents and her brother, lived their lives in fear that someday, immigration would come and tear them apart. Then, when Guerrero was the tender age of 14, she came home from school one day to find her entire life had changed over the course of one afternoon. The house empty and her parents gone. Their worst nightmare had come true — her parents were being deported, but what was going to happen to the young Guerrero? She hid under her bed, waiting for someone to come for her, but no one ever did.

When her parents were forced out of the country, Guerrero had to make a decision for herself: go back to Colombia, her parents' home country, to be with her family, or stay in the U.S. Despite the heartache of being alone at 14, she decided to stay in Boston to finish her education at the Boston Arts Academy. Over the next four years, Guerrero would work tirelessly to hone her artistic talents as an actress, singer, and dancer, all the while trying to figure out who she was in the absence of the family that had defined her. Through the sadness, the anger, and the heartbreak, she persevered, which is what makes her story so much more than a star's rise to fame.

A heartbreaking yet ultimately inspiring account of her life, here are 5 reasons why you need to read In the Country We Love , because it's more than just a celebrity memoir.

1. It Tells The Story Of Undocumented Immigrants And Their Families

Everyone has their own opinion about immigrants in the U.S., and often times those opinions overshadow the real story — that of the immigrant experience itself. In In the Country We Love, Diane Guerrero gives a voice to the millions of immigrants who came to this country with the best intentions — to make a better life for themselves and their families, and to find a way to become a legal, permanent resident. In her introduction, Guerrero explains:

"My story is heartbreakingly common. there are more than eleven million undocumented immigrants in America, and every day and average of seventeen children are placed in state care after their parents are detained and deported, according to US Immigration and Customs Enforcement (ICE) [...] It's not easy for me to be so open about what happened in my family, especially after spending so many years hiding in the shadows. I've really struggled with putting my business out there. So why am I choosing to reveal so much now? Because on that afternoon when I came home to an empty house, I felt like the only child who'd ever dealt with something so overwhelming. And in the agonizing years that followed, it would've been meant everything for me to know that someone, somewhere had survived what I was going through. For thousands of nameless children who feel as forgotten as I did — this memoir is my gift to you."

But Guerrero's story isn't just for children and families like hers. It's also a crucial for American citizens, ones whose families were born here and who will never experience the fear of deportation, to understand the very really struggles facing millions of immigrants and their families every day. Unless you've gone through it yourself, it's almost impossible to comprehend. That is, unless someone like Diane Guerrero is brave enough to share their own true story.

2. Immigration Is An Important Political Issue, Now More Than Ever

In our current climate — one where potential presidential candidates are talking about building walls around our borders to keep immigrants out, one where politicians are discussing deporting thousands of undocumented families — understanding the immigrant experience is essential. Many immigrants who are here illegally, like Guerrero's family, aren't trying to break any laws. In fact, their main goal involves establishing permanent citizenship for the sake of themselves and their loved ones.

"And even amid their bickering, my parents saw eye-to-eye on one thing: Somehow, some way, they needed to work toward legal permanent residence. That's why, from the minute their visas expired, they began strategizing about how they could become citizens."

To truly understand the issue of immigration, you need to understand the people who it affects the most: the immigrants and their families. Guerrero's memoir sheds a light on those people, the hard working men and women who spend their time, energy, and what little hard-earned money they have trying to achieving permanent citizenship, who are lied to, taken advantage of, and ignored by a broken immigration system that makes it nearly impossible to be in this country legally, honestly, and safely. If anything, Guerrero's story proves a wall and mass deportation won't solve anything, but only make the problem worse.

3. It's An Honest And Diverse Coming-Of-Age Story

From the classic fictional ones like The Catcher in the Rye to the modern How to Build a Girl, there are hundreds of coming-of-age stories, but Guerrero's stands out for it's diverse and often untold story of growing up Latina, and growing up the child of undocumented immigrants. Guerrero gives a voice to millions of Latino teenagers struggling to define their identity in world where they feel like they don't belong, one where they're lost, scared, and often alone. For Guerrero, whose mother was deported several times before both of her parents were permanently removed from the country, growing up without her mom around made becoming a woman even more awkward than it already is.

"There's only one thing more awkward than buying a bra with your father — and that is buying maxi pads with him. Dad was cool about it and tried to make me feel as comfortable as possible by keeping his mouth closed."

Guerrero writes candidly about the unique challenges that come with not only growing up and figuring out how to be a woman, but also about being poor, marginalized, and constantly in fear. While she doesn't hold back any of her emotions — not the anger she has for the broken system that tore her family apart, not the bitterness she feels towards the lawyers who took advantage of her father, not the resentment towards her parents for leaving her behind — she doesn't let them consume her, either. Instead, her memoir is a fine balance between despair and hope, anger and optimism. It's a diverse coming-of-age story, one thousands of young people across the nation can truly relate to.

4. It Highlights The Struggles Of Growing Up With Disabilities

On top of all of the other obstacles Diane Guerrero faced growing up as a child of illegal immigrants who were constantly looking over their shoulder in fear, the actress also struggles with a form of dyslexia and ADHD.

"I envied those kids who could zip through their assignments. Why can't I be like that? I'd think. Why can't I concentrate? Years later as a young adult, I made two discoveries. First, I am dyslexic with numbers and words. And second, I have attention deficit disorder. This is terrible for anyone, but more so for a person on my career path."

Guerrero's honesty about her own struggle with disabilities as a teenager and, later, as an adult, gives hope to other kids facing the same difficult challenge. Her story inspires others to chase their dreams and not let anything, not disabilities, discrimination, or other hardships, hold them back.

5. It's A Truly Inspiring Story

It's always fascinating to read about the rise of a star, but in the case of Diane Guerrero, it's so much more than that. Her story isn't just one of big dreams come true. It's a story about an impossible set of circumstances, obstacles bigger than life itself, and the one young woman who found the strength, courage, and perseverance to break through them all to realize her own dreams.

"I still don't comprehend all the reasons my life has turned out the way it has, but that's no longer the central question for me. What matters more is how I can turn the trauma of my experience into some kind of meaningful change for myself and others. There's no point in going through anything difficult if, on the other side, very little shifts. That's true for me personally as it is for us collectively. Does pain have a purpose? I'm not sure. But it can if you give it one — and I've chosen to view my ordeal as an opportunity to me a voice for millions. For the sake of all those who come to our shores, I hope you'll join me."

What's more is that Guerrero doesn't just want to inspire readers to achieve their own dreams or to simply survive their own trauma. She's trying to inspire everyone, legal residents or not, parents of immigrants and others alike, to join her cause and stand up for the millions of families, like Guerrero's, who live everyday in fear of being torn apart. It truly is a moving and inspiring message, and one we need to hear now more than ever.

In the Country We Love is on sale now.